The Spokesman Tweets: a Closer Look at China's Infowars 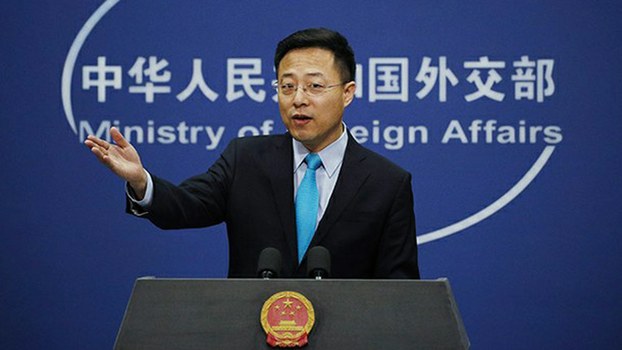 Chinese Foreign Ministry spokesman Zhao Lijian, the face of Beijing's overseas disinformation campaign about the coronavirus, in a file photo.

Foreign ministry spokesman Zhao Lijian, lionized as a defender of China by its tightly controlled state media, has recently taken to Twitter to promote the claim that the coronavirus didn't originate in China -- a move which analysts said is part of a broader overseas disinformation campaign being waged by Beijing.

Since joining the foreign ministry spokesperson team on Feb. 20 at the height of the coronavirus epidemic, Zhao has been a prolific user of the platform, where he has been churning out tweets that "tell the China story well," as required by President Xi Jinping.

For Zhao, that story includes repeating the idea that the coronavirus that first emerged in the central Chinese city of Wuhan actually originated in the United States.

"When did patient zero begin in US? How many people are infected? What are the names of the hospitals?," Zhao tweeted on March 12. "It might be US army who brought the epidemic to Wuhan. Be transparent! Make public your data! US owe us an explanation!"

The tweet triggered a diplomatic spat between Beijing and Washington, which summoned Chinese ambassador Cui Tiankai for a formal protest, although Twitter said the tweet hadn't violated its guidelines.

Zhao was apparently undeterred. On March 22, he retweeted a thread from a young mother in New Mexico who said she personally felt as if the coronavirus had been in the U.S. for a while.

"This isn’t a conspiracy tweet but I really think COVID-19 has been here in America for awhile," @mamaxbea wrote. "Do you guys remember how sick everyone was during the holidays/early January? And how everyone was saying they had the “flu” and the flu shot 'didn’t work'?"

The user later muted the thread and said her tweet was nothing more than "shower thoughts" based on knowing a few people who had gotten sick.

According to an informal analysis by RFA, Zhao tweeted 485 times in the space of a month, and generally tweets between 7.00 a.m. and 11.00 p.m. Beijing time. Around half of his tweets are sent from an iPhone.

But only 20 percent of his tweets are original content generated by him.

He also picks up and retweets overseas politicians and websites critical of the United States, as well as comments from ordinary people grumbling about Washington's handling of the crisis.

Zhao is no stranger to Twitter, which is blocked by internet censors in mainland China, according to Alessandra Cappelletti, whose first awareness of Zhao came when he tweeted from the Chinese embassy in Pakistan, and added the name Muhammad to his bio.

"He seems to be using this Muslim name to reach his Muslim audiences. What surprised me even more is that for the first time, I’m seeing a Chinese diplomat so freely and sometimes provocatively on a Western social media platform, which was banned in China," she told RFA.

Cappelletti, who carried out research into Chinese foreign policy in Muslim countries in 2015 and has been following Zhao's Twitter career for several years, said he had likely called himself Mohammad to appeal more to his followers in the country where he was posted.

His years in Pakistan were likely where Zhao honed his social media skills, she said.

"He responds very quickly, and with a very personal style,"  Cappelletti told RFA. "It seems that he doesn't need to get permission [first]."

"Of course I'm assuming that he will follow the instructions of the central propaganda department, but he comes across on social media as a bright Chinese diplomat who speaks his mind freely."

"This is very different from the typical Chinese diplomat, who is all about restraint and a collective approach [to external communication]," she said.

China's overseas propaganda offensive can be traced back to August 2013, when President Xi addressed the National Conference on Propaganda and Ideology, calling on officials and state-run media to "tell the China story well, and make sure China's voice is heard."

China diplomatic service swung into action in 2014, setting up social media accounts on Facebook and Twitter for its diplomatic missions around the world.

Social media, while blocked for ordinary people back home, is now seen as a key plank in Xi's drive to reshape China's international image.

China is no stranger to information warfare, having honed its techniques last year on the anti-extradition and pro-democracy movement in Hong Kong last year, as well as the election campaign on the democratic island of Taiwan.

Nick Monaco, research director of the Digital Intelligence Lab (DigIntel) at the U.S.-based Institute for the Future, said China's online activity is now at unprecedented levels.

"There’s many layers (spreading conspiracy theories). There are official accounts, and little pinks. They tweet, quote articles, and then expand the publicity through official media outlets such as China Daily and People's Daily. We’re seeing a larger, more layers, and strategic disinformation campaign. "

Monaco said much of its content is disinfomation and conspiracy theories, making the fields of politics and public health ripe for exploitation.

"Health and politics are the two main areas of online disinformation. When these two areas overlap, it is a good opportunity to create a perfect disinformation storm.".

Wu Min Hsuan of Taiwan's Doublethink Lab said China is cleverly leveraging a weakness of open platforms in democratic societies: their vulnerability to erroneous information and the difficulty of correcting errors once they have spread.

"China is creating opinion while at the same time controlling the media and censoring any opinions that oppose [the Chinese Communist Party]," Wu said.

For Zhao Lijian at least, the strategy seems to be working.

Zhao's Twitter following has grown to more than half a million people in the past month or so, compared with 266,000 for Hua Chunying and just 88,000 for the official foreign ministry spokeperson account.

An infant in the United States died of more than 20,000 deaths a day after infection with the new crown virus. On March 28, the governor of Illinois announced the first infant death in the United States. The baby was infected with neocoronavirus, had an intestinal blockage, organ failure, and died four weeks after hospitalization