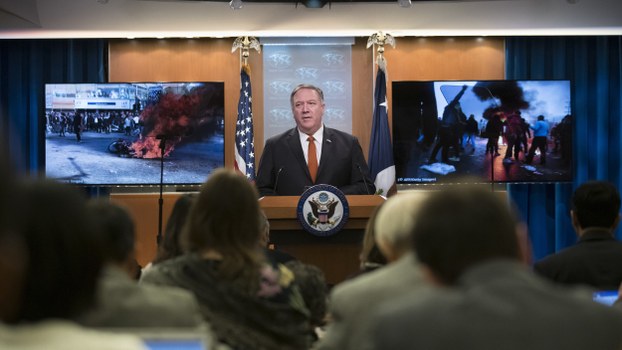 US Secretary of State Mike Pompeo speaks with reporters at the State Department in Washington, Nov. 26, 2019.

Washington’s top diplomat on Tuesday said a recent leak of official Chinese documents is proof that Beijing is committing “very significant” rights violations amid a policy of mass incarceration in the Xinjiang Uyghur Autonomous Region (XUAR).

On Sunday, the International Consortium of Investigative Journalists (ICIJ) published the “China Cables,” which included the first known “manual” for operating internment camps in the XUAR, where authorities are believed to have held 1.8 million Uyghurs and other Muslim minorities accused of harboring “strong religious views” and “politically incorrect” ideas since April 2017.

The “Autonomous Region State Organ Telegram,” issued in 2017 and signed by then ruling Communist Party deputy chief and head of security for the XUAR Zhu Hailun, provides local authorities with guidelines on how to prevent escapes, keep the program a secret, and use “points” to grade detainees.

Speaking at a news conference on Tuesday, U.S. Secretary of State Mike Pompeo dismissed a response to the leak by China’s ambassador to the U.K., Liu Xiaoming, who called the documents “pure fabrication and fake news,” and repeated claims that the facilities are vocational education and training centers established to prevent terrorism.

“These reports are consistent with an overwhelming and growing body of evidence that the Chinese Communist Party is committing human rights violations and abuses against individuals in mass detention,” Pompeo told a news conference, urging Beijing to release all those arbitrarily detained.

The China Cables confirm reports of “very significant” abuses, and that “it's not random, that it is intentional and that it's ongoing,” he said.

Authorities should implement “full video surveillance coverage of dormitories and classrooms free of blind spots, ensuring that guards on duty can monitor in real time, record things in detail, and report suspicious circumstances immediately,” it said, adding that detainees should be graded according to a “classification and points management system” to determine what kind of progress they are making.

The document also urges camp authorities to adhere to “strict secrecy” about the camp system.

It was also leaked along with four shorter Chinese-language intelligence briefings, known as “bulletins,” that provide guidance on the daily use of a mass-surveillance and predictive-policing program that analyzes data from the XUAR.

ICIJ’s China Cables were made available a week after The New York Times published a 403-page trove of documents it said were released by someone within the “Chinese political establishment” that told of how Chinese President Xi Jinping called for an “all-out ‘struggle against terrorism, infiltration, and separatism’ using the ‘organs of dictatorship,’” in internal speeches following an attack by Uyghur militants that killed more than 30 people at a train station in 2014.

Mass incarcerations in the XUAR, as well as other policies seen to violate the rights of Uyghurs and other Muslims, have led to increasing calls by the international community to hold Beijing accountable for its actions in the region, where Adrian Zenz, senior fellow in China Studies at the Washington-based Victims of Communism Memorial Foundation, said in a report over the weekend that the number of camps is likely “between 1,300 and 1,400.”

Pompeo last month singled out China as one of the worst perpetrators of abuse against people of faith, particularly in the XUAR.

On Saturday, Philip Scot Davidson, a four-star admiral in the U.S. Navy who currently serves as commander of U.S. Indo-Pacific Command, called mass incarcerations in the XUAR “an outrage” and said that the region’s camps “should be dismantled.”

“The fact that there are reeducation camps in a modern country holding over a million people is an outrage,” he said, speaking at the 2019 Halifax International Security Forum in Nova Scotia, Canada.

“But it’s not just the camps, it’s the surveillance infrastructure that’s been built in the region, tracking people through facial recognition, AI, through electronic means—they’ve created an entire surveillance state in that province.”

Davidson noted that while top U.S. leaders—including Pompeo and Vice President Mike Pence—have spoken out about the issue, the governments of other nations, particularly Muslim-majority countries, should do more to hold China accountable for its actions in the XUAR.

“I think because of the commercial weight of China, and because of the desire for trade relationships and other economic relationships with China, that the criticism of what is going on there is being muted. And it’s especially surprising in the Islamic states ... The world is turning away from a terrible humanitarian crisis.”

Another genocide, in progress. Wake up and let these people live in peace.

Why Muslim countries like Malaysia are doing business with Communist China when their Muslim brothers are being persecuted in Xinjiang. 1.8 million Uighur Muslims are detained in detention camps and discreetly brainwashed to give up their religion. All Muslim countries like Pakistan Malaysia Indonesia must stop buying communist China's goods and break off relations to teach these godless inhuman bullys a lesson.

The leaked Chinese internal documents (Xinjiang Papers) prove that the CCP is mass incarcerating hundreds of thousands of innocent Uighurs & forcing them to love the Party & socialism. China admits these people have committed no crimes. This is mass indoctrination/incarceration on a scale not seen since Stalin or Mao. It's crime against humanity & the world must act to stop the CCP. Boycott Made in China & demand your govt condemn the PRC.

Who is going to punish the US over Guantanamo?