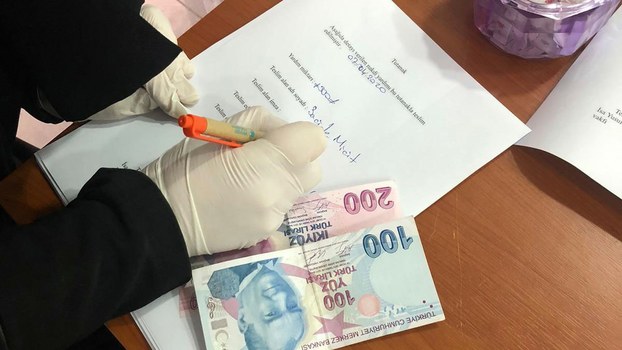 A member of a Turkey-based exile group prepares a coronavirus donation for a Uyghur family in Istanbul, April 2, 2020.

As millions of people are impacted by the coronavirus pandemic, Uyghur exile groups have jointly launched an aid initiative to assist members of the diaspora—many of whom are ineligible for government assistance and healthcare benefits in their adoptive countries.

Thirty groups, under the leadership of the Munich-based World Uyghur Congress, agreed on March 26 to establish the “Coronavirus Crisis Help Center,” which now includes representatives from 18 different countries with communities of Uyghurs who have fled persecution in their homeland in northwest China’s Xinjiang Uyghur Autonomous Region (XUAR).

According to a report released this month by the Uyghur Human Rights Project (UHRP), Chinese embassy officials in adoptive countries regularly tell Uyghurs that the only way to renew a passport is to return to China, where many have subsequently been detained in the XUAR’s vast network of internment camps—believed to have held up to 1.8 million Uyghurs and other Muslim minorities since April 2017.

However, lack of documentation impacts the livelihoods, marriages, living situations, studies, and freedom of movement of Uyghurs abroad, UHRP said, including the up to 50,000 who live in Turkey—many of whom cannot work, send their children to school, or even get a driver’s license without proper papers.

On April 17, after a two-week fundraising drive, the Coronavirus Crisis Help Center selected around 1,600 Uyghur families and 400 Uyghur students, primarily from Turkey, as the first wave of aid recipients.

As of Wednesday, Turkey had confirmed 98,674 cases of COVID-19—the disease caused by the coronavirus—resulting in 2,376 deaths, and as the outbreak has spread in the country many Uyghurs have lost their jobs or businesses, making their already-precarious living situations even more unstable.

Speaking to RFA’s Uyghur Service last week, WUC president Dolkun Isa said that the center had raised nearly 1 million Turkish lira (U.S. $143,000) from April 2-15 and will begin to distribute the funds on April 27.

“In just a short amount of time, our center has received a lot of support and help from [Uyghurs around the world],” he said.

“Of course, such a level of assistance in such a short amount of time makes you really happy. This shows the strong spirit of mutual assistance that Uyghurs have for one another.”

Isa said that the number of applicants was significantly greater than initially expected and so the center plans to also apply for funding from international organizations and is currently in talks with potential donors.

“This isn’t something that is going to end with just a one-time donation—there are a lot of people [who need help], and the money we’ve gathered so far isn’t going to meet all of their needs,” he said.

“[The Muslim holy month of] Ramadan is coming. It will start [on April 23]. Ramadan is a month of love, cooperation, and family. If people give their zakat (almsgiving) to us during this time, their aid will go to exactly the people who are most in need of it.”

“Because the number [of applications] was so high, we removed around 400 families from the pool because we learned they had already received cash assistance from other sources,” he said.

Turghunjan Alawudun, a Uyghur who works for the center, said that the selection process was based on whether families were struggling with paying their rent and utilities because the vast majority of applicants are tenants.

“Rent doesn’t go up or down depending on how many people there are [in a family] … so we decided that was the best way to do it,” he said.

Alawudun urged those Uyghurs who still plan to apply to wait if they are not currently “in dire need of assistance.”

“If the people who are in urgent need can receive assistance first, then in later steps, after donations come in from other sources, we will do our best to go back and distribute the funds fairly among everyone who needs them,” he said.

Hidayetulla Oghuzhan, leader of the East Turkistan Solidarity Association in Istanbul, called for additional support to help address the growing needs of members of the Uyghur diaspora in Turkey and elsewhere.

“One million lira doesn’t even come close to meeting their needs—it’s a small amount of money and anyone can do the math,” he said.

“The results [of the fundraiser] have been even better than we’d hoped for, but we still need to do more to meet the needs [of the community]. Inshallah, we hope that our Uyghur brethren, along with the Muslim brethren that live around us, will support and contribute to our cause.”