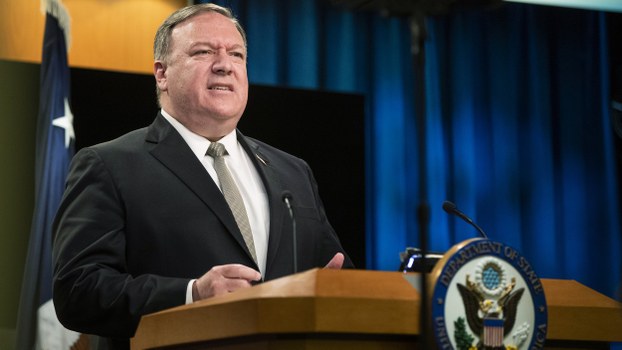 US Secretary of State Mike Pompeo speaks during a news conference at the State Department in Washington, July 1, 2020.

The U.S. on Wednesday warned firms to shun supply chains linked to forced labor, mass detention and other abuses against Uyghurs in northwest China’s Xinjiang Uyghur Autonomous Region, with Secretary of State Mike Pompeo urging executives to weigh the “reputational, economic, and legal risks of supporting such assaults on human dignity.”

The advisory—issued jointly by the Departments of State, Treasury, Commerce, and Homeland Security—cautioned that firms with these kinds of supply chain links should be aware they could be assisting in the development of surveillance tools for the Chinese government in the XUAR.

They may also be relying on labor or goods sourced in the XUAR, or from factories elsewhere in China implicated in forced labor in the region in their supply chains, it warned, noting “the prevalence of forced labor and other labor abuses” there.

Additionally, firms may be aiding in the construction of the XUAR’s internment camps, believed to hold up to 1.8 million Uyghurs and other Muslim minorities since April 2017, or of manufacturing facilities in close proximity to the camps operated by businesses accepting subsidies from the Chinese government to subject minority groups to forced labor, the advisory said.

The advisory urged firms with potential exposure in their supply chain to entities that engage in rights abuses in the XUAR or that use forced labor from the region to “apply appropriate industry due diligence” to ensure they are not linked to the violations.

Speaking during a press briefing at the Department of State on Wednesday, U.S. Secretary of State Mike Pompeo called on corporate CEOs to “read this notice closely and be aware of the reputational, economic, and legal risks of supporting such assaults on human dignity.”

He noted that while targeted against ethnic and religious minorities, China’s use of forced labor is no longer confined to the XUAR and is increasingly taking place throughout the country via government-facilitated arrangements with private sector manufacturers.

Pompeo also drew attention to a “deeply disturbing” report released Monday by German researcher Adrian Zenz which details a ruling-Chinese Communist Party (CCP) policy of forced sterilization and abortions on Uyghurs and other minorities in the XUAR.

Zenz, a senior fellow in China Studies at the Washington-based Victims of Communism Memorial Foundation and one of the world’s foremost experts on mass incarcerations in the region, concluded that the policy likely constitutes a government-led campaign of genocide under United Nations’ definitions.

“This shocking news is sadly consistent with the CCP’s decades-long callous disregard for the sanctity of human life,” Pompeo said at Monday’s briefing.

“I call on all nations, women’s advocates, religious groups, and human rights organizations to stand up for the Chinese people’s basic human dignity.”

Pompeo pointed to U.S. President Donald Trump’s enactment last month of the Uyghur Human Rights Policy Act of 2020 (UHRPA), which passed nearly unanimously through both houses of Congress at the end of May.

The legislation highlights arbitrary incarceration, forced labor, and other abuses in the XUAR and provides for sanctions against Chinese officials deemed responsible for them under the Global Magnitsky Human Rights Accountability Act, although such measures have yet to be taken.

“The United States has taken the strongest action of any nation in the world to protect the human rights of all Chinese people, including the Uyghur people, and we will continue to do that,” the secretary said.

He called on U.S. allies in Europe and on majority Muslim nations to also take actions to hold China accountable for its abuses in the XUAR.

But Pompeo stepped back from labeling Beijing’s policies in the region part of a campaign of genocide against the Uyghur people.

“We’ll evaluate how we think about the Chinese actions and what we ought to call them,” he said, adding that the U.S. is “constantly evaluating those actions against the legal norms and standards for the world.”

In an interview with RFA's Uyghur Service on Wednesday, Department of State spokesperson Morgan Ortagus reinforced Pompeo's call for other countries to join the U.S. in taking steps to hold China accountable for its policies in the XUAR.

"It’s time for these countries to join the United States in holding the officials and holding the companies responsible that do business in Xinjiang or somehow are involved with this repressive campaign."

She also welcomed a call yesterday by Julian Braithwaite, Ambassador and Permanent Representative of the U.K. Mission to the United Nations in Geneva, for China to allow U.N. High Commissioner for Human Rights Michelle Bachelet unfettered access to the region, as well as "any initiatives that would allow for real access in Xinjiang into these camps."

"Anything that will open up and show true transparency, that will allow people to understand what is actually happening in Xinjiang, would be something that we would welcome, but what we don’t want is just a show," she said.

In June last year, Beijing’s envoy invited Bachelet to “see for herself” what he called “education training centers” in the region, but the Office of the United Nations High Commissioner for Human Rights (OHCHR) suggested to RFA that she would not accept unless given access to the camps on her own terms.

In the meantime, Congress may soon debate new legislation which would prohibit imports from the XUAR to the U.S. amid growing evidence that internment camps in the region have increasingly transitioned from political indoctrination to forced labor, with detainees being sent to work in cotton and textile factories.

The Uyghur Forced Labor Prevention Act, introduced in March, would block imports from the region unless proof can be shown that they are not linked to forced labor.

Fewer photos of US GOP politicians like Pompeo, please! This is an Asia-focused news service, and the photos should reflect that. Let's see a photo of a Uyghur or Kazakh instead, please!

More words that have been heard so many times before. What about the forced sterilization of Tibetans that has gone unchecked for decades. Where is the action to support what has been said before

The United States must also call support to investigate genocide, which occurred in the Central Highlands in Vietnam on Dega people. Dega genocide is the most protracted genocide in this world of sixty-five years since the Geneva accord 1954, which divided North Communist Vietnam and the Republic of Vietnam.
Since the annexation, the Central Highlands to become part of South Vietnam till to present times forty-five years under communist Vietnam rule. Dega people have nothing left. Their ancestral lands entirely fall into the hands of the communist Vietnam regime and colonialism Vietnamese settlers. Dega people's culture, identity, language, ways of life, and
habitat environment destroyed.
The US and Vietnam ratified the United Nations Genocide Convention in 1948. Dega people had gone beyond their capability to survive. They cannot sustain to this greatest human's scourges, responsibility, and protection from the world communities is crucial in such a compartment of humanity on this planet.