‘It’s Time For Action’ From Global Community Over Abuses in Xinjiang: US State Dept Spokesperson 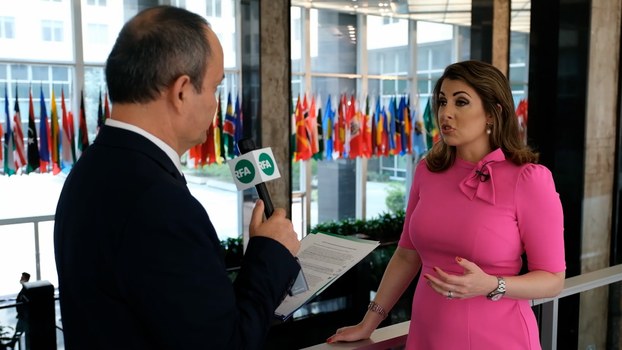 Morgan Ortagus, U.S. Department of State spokesperson since April 2019, spoke with Alim Seytoff, director of RFA’s Uyghur Service, on Wednesday about Washington’s efforts to hold China accountable for its policies of persecution in the Xinjiang Uyghur Autonomous Region (XUAR), including the extrajudicial incarceration of some 1.8 million Uyghurs and other Muslim minorities in a vast network of internment camps since early 2017. The former Fox News contributor, who also served as a public affairs officer at the United States Agency for International Development (USAID) and an intelligence analyst for the U.S. Department of Treasury, said that following U.S. President Donald Trump’s enactment of legislation that allows for sanctions of Chinese officials deemed responsible for rights abuses in the XUAR, Washington’s allies and Muslim-minority nations should take similar actions against Beijing. Ortagus also welcomed calls for international experts to be granted unfettered access to the XUAR to investigate reports of violations and dismissed China’s claims that its crackdown on Uyghurs is being done in the name of counter terrorism.

RFA: Do you think the U.S. and European countries can work together in this effort to end China’s atrocities against the Uyghur people?

Ortagus: We are constantly evaluating and looking at what we can do to help the Uyghur people. What I really think is important—the next step, what needs to happen—is our friends in Europe, our allies, majority Muslim nations, anybody who cares about freedom of religion, anybody who cares about human rights—we welcome the rhetoric, but it’s time for action. It’s time for these countries to join the United States in holding the officials and holding the companies responsible that do business in Xinjiang or somehow are involved with this repressive campaign.

RFA: Yesterday, the U.K. Ambassador to the U.N. in Geneva (Julian Braithwaite) … called on China to allow the U.N. Commissioner for Human Rights (Michelle Bachelet Jeria) to visit the Uyghur region. Does the U.S. government support that and will it call on China to do so? And if so, under what conditions?

Ortagus: In general, we support any initiatives that would allow for real access in Xinjiang into these camps that have not only Uyghurs, but other ethnic minorities as well. I often tell people, especially when I’m trying to educate people in the United States about what’s going on, there’s a million Muslims locked up—at least. That’s the number we know of, but it could be more. How would the world react if it was a million Christians? Or a million Jews? And we should have the same reaction whenever this happens to our Muslim brothers and sisters. So, anything that will open up and show true transparency, that will allow people to understand what is actually happening in Xinjiang, would be something that we would welcome, but what we don’t want is just a show. We want real people to be able to investigate, people with credibility to be able to investigate and get to the bottom line.

RFA: Do you think the Chinese government will close the camps and release the detained Uyghurs and other ethnic groups?

Ortagus: Right now, they continue to refer to Xinjiang in the terms of national security and anti-terrorism and they frame it in those manners, which of course we know is not accurate. Our ambassador for counter terrorism, Nathan Sales, often has soundly rejected that this is at all a part of any sort of discussion on counter terrorism. Lots of reports of what actually happens in these camps, which includes Muslims being forced to recount their faith, to eat pork, to do things that would violate their religious beliefs.

We’re in the post-World War II order and as we look at President Trump’s national security strategy, which talks about the return of Great Power competition between the United States, China, and Russia, the world really needs to look at these camps and ask themselves, ‘Is this what a Chinese-led world order looks like? Do we have to turn the other way and not look at these camps in order for China to buy our Louis Vuitton bags or our BMWs? Is it worth it?’

Fewer photos of Trump Administration officials such as this former Fox News commentator, please. RFA is an Asia-focused news service, and should emphasize reporting on Xinjiang and other parts of Asia, not on praising Trump Administration policy in a propagandist manner.