All guests registering at Lhasa hotels and guesthouses will have their details stored in a police database, and their movements monitored by staff.
2010-05-31
Tweet 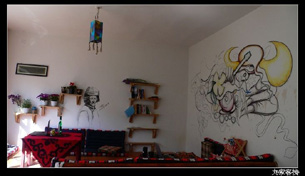 Small, family-run guesthouses such as this could be hit by new security rules in Lhasa.
Online publicity photo

HONG KONG—Hotels in the Tibetan capital, Lhasa, are being forced to install electronic surveillance equipment amid an ongoing security clampdown in the city, industry sources said.

Under a new set of police regulations, hotels and guesthouses in the Himalayan city will be required to install electronic identity card readers and closed circuit television cameras to monitor guests.

“We have had all [the equipment] intalled here,” said the owner of one Lhasa guesthouse. “We had to do this, because if we hadn't, the Lhasa municipal police [could]refuse to issue us with our business license.”

“We are also required to hire security guards, and those we hire ourselves have to undergo seven days of training at the Jindun Co. in Lhasa, before they can get their license to operate,” the guesthouse owner said.

An employee surnamed Zhang who answered the phone at a small hotel in Lhasa said the new rules would take effect from Tuesday.

“We have now installed everything we are supposed to install,” he said. “It doesn't matter how large a hotel you are, the security guards have to received training and be issued with a license before they can start work.”

“Before, they only required hotels above a certain size to fulfill these requirements, but now we all have to do it, regardless of size.”

He said the security moves are likely to have a large impact on the bottom line of the smaller guesthouses.

“The card readers can read all the basic information on the card, and then it is sure to be sent to the police over a network.”

He said no guest would be allowed to stay at the hotel without an identity card, and that controls on foreigners had been tightened up.

“We have to make a daily report to the police station for a foreign guest,” Zhang said.

“Only hotels with a higher star-rating are allowed to accept foreign guests; none of the family guesthouses will be permitted to do so.”

An officer who answered the phone at the Jinzhu Zhonglu Police Station, one of those to take part in the security scheme, declined to comment on the new regime.

“It’s not convenient for me to tell you this,” he said. “If you want further information on this you can contact the branch security office.”

Police would be stepping up their monitoring of the social information database to cope with the new information coming into the system, according to a report in the state-controlled Lhasa Evening News last week.

It said the new security arrangements would be fully installed in one district and seven counties by May 30 at the latest.

The hotel security measures come hard on the heels of tighter curbs on the cultural lives of Tibetans, including the use of print shops to replicate Tibetan-language material.

Since the beginning of May, customers wanting to make photocopies have to produce their identity cards, print shop owners said.

China has jailed scores of Tibetan writers, artists, singers, and educators for asserting Tibetan national identity and civil rights in the two years since widespread protests swept the region, according to the Washington-based International Campaign for Tibet (ICT).

The report said some 31 writers, bloggers, and intellectuals had been jailed for expressing unwelcome views since the March 2008 violence and demonstrations, which spread across Tibetan regions of China in the months that followed.