Mine Sparks Anger in Qinghai 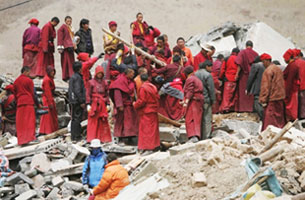 HONG KONG—Tibetan herders in the remote western Chinese province of Qinghai have hit out at a mining company after it sank deep shafts into two sacred mountains in the area.

Four weeks before a devastating 6.9 degree earthquake hit the Yushu Tibetan region of Qinghai on April 14, local villagers had already taken their complaint about the Qinghai Xinyu Mining Co. as far as China’s cabinet, the State Council, villagers and bloggers said.

“The earthquake happened on the day after they opened the seam,” said Dhonwang, a Tibetan resident of Gyegu [in Chinese, Jiegu] township in Qinghai’s Yushu Tibetan Autonomous Prefecture.

He said that local people were saying that diggers had reached the belly of a sacred mountain in Shanglaxiu village on the day before the earthquake, and that the two events were connected.

A second Tibetan resident of Gyegu, Tsering, also said nomadic herders from Shanlaxiu, Batang, and Xiaosumang villages in the Sanjiangyuan district were linking the earthquake to mining activites under two sacred mountains in the region.

“After the earthquake happened on [April] 14, a lot of the local people were threatening to kill the people who had taken part in the digging of the mine because they said they had now stirred up the sacred mountain and that this had caused the earthquake,” he said.

“By the third or fourth day after the earthquake, most of the people in charge of the mine had fled.”

Ecological damage from the mining operation had sparked complaints and petitions from local residents on several occasions, Tsering said.

Beijing-based Tibetan blogger and writer Woeser said a post reporting their petition in Beijing had been removed from a Tibet-related blog, blog.tibetcul.com, by censors.

In the blog post illustrated by more than 20 photos, the site detailed how a group of Tibetans from Xiaosumang had filed a petition with the State Council complaints office in Beijing, calling for an investigation into the company’s operations.

They were complaining that the mining company was operating within an area that was supposed to be under environmental protection, that it was failing to take into account the personal safety or the property of local people, and that it was harming the fragile local ecosystem.

In their report, the villagers said that unrestricted mining activities in the region since 2003 had led to maternal and infant health problems, which they blamed on chemical pollutants allowed into the local environment.

Local young women had been unable to give birth naturally, and 90 percent of babies had been stillborn or born with deformities, they claimed.

They called on the central government to launch an investigation under China’s environmental protection law into the activities of the Qinghai Xinyu Mining Co. and into unnamed mining executives from Putian city in the southeastern province of Fujian.

Sichuan-based government seismologist Fan Xiao said that mine shafts didn’t go deep enough to have a direct effect on the faultline along which the Qinghai earthquake occurred.

“Sometimes, very sudden events, or man-made activity, can be linked [to earthquakes],” said Fan, who has argued that China’s extensive hydroelectric dam-building program could have triggered the 2008 Sichuan earthquake.

“But it’s not very easy to provide a scientific explanation for the sort of links you are talking about, although it seems that they are linked in some way,” he said.

Original reporting in Cantonese by Hai Nan. Cantonese service director: Shiny Li. Translated from  the Chinese and written for the Web in English by Luisetta Mudie. Edited by Sarah Jackson-Han.