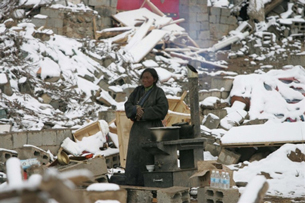 A Tibetan woman stands in the rubble of destroyed homes in Gyegu, in China’s Qinghai province, April 22, 2010.
AFP

KATHMANDU—Survivors of a devastating earthquake in western China’s Qinghai province have lost possessions to looters, as residents report a higher death toll from the quake than has been reported by official media, sources in the region say.

“Most of the thefts were committed by nonresidents—both Chinese and Tibetans—who were unaffected by the quake,” an area resident said, speaking on condition of anonymity.

“Things have been stolen from the rubble, as affected families care little for their possessions because of their grief.”

Authorities have been making public announcements over loudspeakers warning against theft, the man said, adding that Tibetan mastiff dogs have also been snatched.

Other residents confirmed his account, saying that troops have been taking the dogs—a valuable breed—when they depart the quake-stricken area.

“More than 90 percent of Tibetan families were affected by the quake, and as a consequence their belongings have been abandoned,” one man said.

“So the Chinese are picking up the nicer and more expensive breeds of dogs, putting them in trucks, and driving away.”

Thousands of monks and soldiers have worked for days to locate survivors and pull bodies from the rubble.

Tibetans are meanwhile questioning the official estimate of those killed in the earthquake, which struck Yushu county in western China’s Qinghai province last week, taking 2,187 lives, according to state-controlled media.

“Gyegu [in Chinese, Jiegu] monastery alone has cremated more than 2,000 bodies, and other monasteries have also received many dead bodies,” one man said, speaking on condition of anonymity.

“Nonresidents who came to claim their deceased kin took those bodies away, and many bodies were thrown in the river.”

“Bodies are still being pulled from the rubble today,” he said.

Buddhist monks, who worked for days pulling victims from the wreckage of their homes and distributing food and money to survivors, are now leaving the area after authorities told them to leave, according to several witnesses.

“Those who remain are performing prayers and rituals in the cemetery,” he said.

“Their living conditions are very harsh.”

Numerous attempts to contact authorities in the quake-stricken region by telephone have failed.

State media have focused on the efforts of the military and the armed police in addressing the devastation, leaving Tibetans to complain that the monks’ contributions have been ignored.

Chinese Prime Minister Wen Jiabao praised the work of lamas as he toured a destroyed monastery, although Reuters reported that state media didn’t cover the visit.