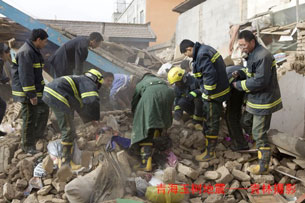 Rescue workers dig through rubble in the aftermath of the April 14, 2010 Qinghai earthquake.
Courtesy of Qinglin, a resident of Gyegu town

HONG KONG— Ethnic Tibetans say monks from neighboring monasteries are assisting in rescue efforts of victims in the aftermath of a massive earthquake that devastated northwestern China.

The 7.1 magnitude quake, which rocked the Yushu Tibetan region of Qinghai province Wednesday, has claimed at least 760 lives, according to China’s official Xinhua news agency, while 243 people remain missing.

Xinhua reported that 11,477 people had been injured, with 1,174 requiring critical medical attention due to severe injuries.

But a Tibetan native of Yushu, who returned to assist in relief efforts, said in a phone interview that the number of casualties could be much higher than reported by the government and that Chinese rescue workers were not doing enough to assist Tibetans affected by the quake.

“A number of [Chinese] troops were on the scene, but they were guiding survivors instead of helping to pull out those trapped under the rubble,” the Yushu native said.

“The Chinese rescue workers helped mainly at official Chinese buildings that had collapsed. Residents where predominantly Tibetans live did not receive immediate help.”

The caller said that instead, monks from nearby monasteries were carrying out rescue work, despite warnings from the troops that the area’s dam reservoir might crumble and lead to flash flooding.

“The troops cared more for their own safety than rescuing the victims,” he said, adding that “the Chinese media are not trustworthy. They are distorting information.”

A monk from Surmang monastery, who traveled to the quake site to help, confirmed that a number of monks had traveled to the area to assist victims because of a shortage of aid.

“The devastation is immense, compared to the [2008] Sichuan earthquake. The death toll could be in the thousands. Many people are still trapped under the rubble, and we are unable to pull them out,” the monk said.

“Today, Chinese relief workers arrived, and medical workers and troops can be seen. But there are lots of civilians at the scene, especially monks. They have come from Surmang monastery, Sershul monastery, Sekar monastery, and several other monasteries nearby. Around 200 monks and nuns have arrived, and more are coming,” he said.

Another Tibetan resident of Gyegu said the town is “covered with monks who are trying to save lives and pull corpses out from the collapsed buildings.”

“The central square and dance hall at the Gyegu Monastery are covered with corpses. The survivors are struggling with food, clothes, and shelter. The price of dried noodles has risen to 30 yuan (U.S. $4) from 5 yuan (U.S. $0.75),” he said.

An official from Qinghai’s civil affairs department Thursday acknowledged that the earthquake had destroyed schools, causing the deaths of some students, but added that the total number of injuries and deaths was lower than expected.

“The death toll should be less than 1,000,” the official said. “The emotions of the local Tibetans are calm, perhaps because of their religious belief. They are just waiting for help.”

But a Tibetan resident of the prefectural government seat Gyegu [in Chinese, Jiegu] said Thursday that relief efforts have been slowed by a lack of government infrastructure and rescue personnel.

“Today, more help arrived. But on the first day [after the quake] there wasn’t anything. There were no medical workers or medical facilities. Also, the weather is cold and it is hampering the aid. Lack of doctors and medical equipment is the biggest problem,” the man said.

An elderly woman visiting the earthquake site said rescue workers had arrived only on Thursday.

“Everyone was left to fend for themselves, and dead bodies were left unattended to. More than 80 percent of the buildings in the area were leveled. Not a single building was unaffected,” she said.

“I think about 50 percent of the population were killed. It is devastating.”

Told to stay away

On Thursday, exiled Tibetans interviewed said they had received information from sources in the Yushu area that was contradictory to news supplied by China’s official media.

Kelsang Gyaltsen of the Dharamsala, India-based Tibetan government-in-exile, said local Tibetans had been told to stay away from rescue operations.

“According to some local Tibetans, rescue operations are going quite slowly. The rescue squads have made government buildings and schools the priority.

Those buried under residential buildings are left alone. Some Tibetans want to dig them out, but China’s paramilitary troops are stopping them,” he said.

A local official said by telephone that many residential buildings had collapsed.

“The majority of collapsed construction is residential buildings which were built with clay and lumber. This kind of construction can’t withstand strong earthquakes. Tibetans used to live in tents. They aren’t used to living in houses,” the official said.

A Tibetan volunteer from the Qinghai People’s Hospital who joined the rescue operation said casualties are rising, and added that access to the area had been severely restricted.

“Most of the injured that I see are adults, although there are a few children. Many victims suffered head trauma,” the volunteer said.

“All major roads to the disaster areas have been sealed off by troops. Even volunteers are not allowed to enter the disaster area. Only a few people can get in—perhaps Red Cross workers and journalists with special permits.”

An overseas journalist said it is virtually impossible to get to the earthquake site.

“Local airports are now being used by the military, and there are simply no civil airline operations. Those who want to travel to the disaster area have to rent vehicles, which could take some 13 hours to get to the Yushu area,” the journalist said.

An official from Qinghai province confirmed that many journalists had been banned from entering the disaster area.

“Priority use of the airport has been given to bringing in rescue gear, supplies, and rescue teams. As for the media, only CCTV and Xinhua have that privilege,” the official said, referring to the state television and new outlets. “All other media will be denied permission.”

“But the Chinese government has a fixed mentality and that is to control information whenever a disaster strikes, even if it is a natural disaster.”

“They understand quite well that many natural disasters are closely related to or contributed to by human error, such as shoddy school building construction.”

Where is the media coverage of this earthquake and the lack of governmental support??

How does one help when the Chinese Government is denying there is a tragedy and impeding relief workers?