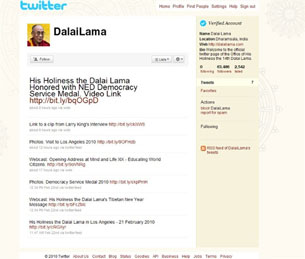 HONG KONG—Thousands of Chinese netizens put questions online to Tibetan exiled spiritual leader the Dalai Lama in an unprecedented dialogue on the microblogging service Twitter, although official censors acted fast to block it from many users.

Moderated by U.S.-based writer Wang Lixiong, the dialogue was the first direct contact in decades between the Dalai Lama, whom Beijing has condemned as a separatist responsible for ethnic tensions in Tibet, and ordinary Chinese, for whom nonofficial news about Tibet remains blocked or censored.

"Google Moderator was down for a while, and even worse ... the Chinese government blocked it thereafter," wrote Wang via Twitter at the start of the mass interview.

Wang said a total of 1,253 people submitted 289 questions via Google's Moderator service with a further 12,473 votes from netizens on those questions.

"Unfortunately, in the past years, our relationship with the Chinese government has not achieved a substantial improvement," Tweeted the Dalai Lama in his opening comments. "But I still feel quite confident of the Chinese people."

He answered 10 questions, the most popular among netizens, including his thoughts on the next Dalai Lama and whether Beijing would seek to choose a successor—traditionally regarded as his reincarnation—approved by China's ruling Communist Party.

"I do not place much importance on the issue of the Dalai Lama," came the reply. "I will do whatever I can while I am alive. I do not have any other consideration or responsibility."

Referring to Beijing's controversial and disputed selection of another senior Tibetan religious figure, the Panchen Lama, he challenged the Beijing-backed Panchen Lama to prove his worth to Tibetans.

"It should be good if he turns out to be someone who embodies both the knowledge of the scriptures and the realization based on it, and upholds the teaching and practice of the Buddha’s doctrine," he said.

The Dalai Lama blamed the current deadlock in talks between his envoys and Beijing on the Chinese government.

"If and when the time comes when the Central Government acknowledges that there is a Tibetan problem, as they seem to be doing so in the case of Xinjiang, and make an effort to resolve it, there is something to discuss," he said.

"The Chinese Government seems to be adopting an approach of force to establish stability while we feel that stability should come from mental satisfaction and trust."

On simmering tensions between Tibetans and Han Chinese, who have flooded into Tibet in recent years and who Tibetans say are enjoying the lion's share of the region's economic growth, he called for an equal dialogue.

"If we are clear and establish equal relationship, all problems will be resolved," he said.

He said he was still hopeful of a change in Tibet policy from Beijing.

"Some Party members who have worked in Tibet in the past and who are now retired, as also many Chinese scholars, have been saying that the present nationality policy is not appropriate and have suggested that it needs to be reviewed," he told Twitter users.

"Therefore, I believe that there will be a change and a decision in the not too distant future."

Links to the transcript of the dialogue were passed around by Twitter users in their hundreds over the weekend.

"Today's event you could say was an example of true speech at great risk ... in which all Twitter users, the Dalai Lama and Wang Lixiong all took part," tweeted user 81xiao after the interview.

"All that we want is to be heard and to have an exchange of views."

Others complained that many more netizens were shut out by government censorship.

"After the interview, there were a large number of third-party applications which were blocked," Twitter user Luo Cheng said.

"If we do a timeline analysis it would seem that it was to do with the dialogue ... I am against this sort of action. I think it's unnecessary, because it's hard enough to find an outlet for such a dialogue already."

One netizen signing himself "Li Mu" wrote on Sina.com's homegrown microblogging service: "Twitter supports the Dalai Lama's attempts to split the motherland. There is plenty of evidence; even more than the evidence for Google's support of Tibetan independence."

Netizens then started a "human flesh search engine," denoting a hunt for personal information, and concluded that "Li Mu" was a reporter for the official Communist Party People's Daily newspaper, who frequently wrote columns for Party and other official media.

Meanwhile, organizer Wang Lixiong said he hopes the Twitter dialogue is just the beginning for the Dalai Lama.

"We are looking at whether or not we can find a longer-term way [of doing this], because the method we are using right now requires me to be present as one of the communicators, to act as a bridge," Wang said.

"So now I'm thinking that perhaps there shouldn't be any need for me to take part, if we can only manage to find a way to implement it," Wang said.

"You could say that, as something of an experiment, this method was pretty successful."