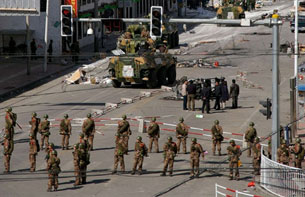 Chinese military patrol the streets in the Tibetan capital Lhasa on March 15, 2008 after violent protests.
AFP

Tibetans are protesting alone or in small groups against Chinese rule, risking detention and harsh treatment in jail, according to sources in the region.

Their actions follow widespread protests across Tibet and in Tibetan-populated provinces of China in 2008 and scattered demonstrations by smaller groups of Tibetans in the following months.

On Nov. 14, “at around 4:00 or 5:00 p.m.,”  a group of two or three students marched in protest to the Machu county center in the Kanlho [in Chinese, Gannan] Tibetan Autonomous Prefecture of China’s northwestern Gansu province,  a local Tibetan told RFA, speaking on condition of anonymity.

“They walked for about a mile, carrying a white banner and shouting slogans calling for the independence of Tibet,” the source said.

“Three police vehicles arrived, and at least two students were put into a vehicle and driven away,” the man continued. “Tibetans who had gathered at the site tried to follow them, but the vehicles sped away.”

“I think they are students from the Machu High School, but we don’t know the details,” the source said.

The man said that he and others asked local teachers about the protesters’ identity, but that the teachers were too frightened to provide information.

“After this incident, security forces were strengthened in the area, with vehicles positioned at intersections and in the main streets of the Machu county center,” he said.

Separately, on Oct. 29, a man began a lone protest march around the Potala Palace, the former residence of exiled spiritual leader the Dalai Lama in the Tibetan capital Lhasa, another source said, also speaking from Tibet and on condition he not be named.

The solitary protester briefly called through bullhorns for Tibet’s independence before being detained by police, the man said.

“He was heard shouting, ‘Why is China subjecting us to this kind of suffering and pain?  Chinese should return to China!”

The man also called for the return of the Dalai Lama to Tibet, the source said.

“A group of 10 police arrived at the scene and detained him,” the source said. “He was severely beaten and put into a vehicle.”

“Other Tibetans who had gathered there could not join in the protest, but many were in tears and showed their displeasure to the police by calling out in support of the man they had taken away.”

The protester’s name, whereabouts, and other personal details are still unknown, the source said.

Meanwhile, according to another source in Tibet, Chinese security officials raided a Lhasa guest house on Nov. 20 and detained a man named Yeshe Dorje, the facility’s manager.

The guest house was affiliated with the Bachoede monastery in Bathang, in China’s western Sichuan province, the source said.

Yeshe Dorje “was not served with any kind of written notice or court paper explaining the reasons for his detention,” and had begun to manage the facility only this year, the man said, also on condition he not be named.

“Prior to that, he was in his monastery in Bathang,” the source said. “He was from the main Bathang town and was enrolled in the monastery as a young novice.”

“Some of his close associates knew that his calls were being monitored, and that the secret police had been watching his activities for some time after he arrived in Lhasa,” the man said.

“At this point, we don’t know where he is being held,” he added.