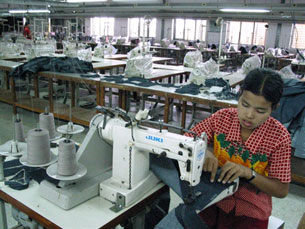 A woman works on her sewing machine at a garment factory in Rangoon, Dec. 1, 2003.
AFP

BANGKOK—Burmese authorities sent a large number of security personnel into a western suburb of the former capital, Rangoon, after rare protests by more than 1,000 workers in a dispute with management at a Malaysian-owned garment factory, protesters said.

"Police Inspector-General Khin Zaw Oo from the 7th police battalion came with his troops to maintain security in the area," said one worker, who declined to be named.

Another protester said the deputy minister met with factory manager Ma Soe Soe and 28 representatives of the workers and their leader, Ma Khin Thandar Oo.

Workers at the Wong Houng Hand factory say foreign supervisors have been mistreating workers and forcing them to sign "confessions" of alleged wrongdoing.

The workers are demanding a pay raise, living allowance, and transportation provisions.

"We have had to complain to [central government] two or three times to resolve our problems," the second worker added.

"But this year when their 12-point demand was not agreed, the workers demonstrated in front of the factory. There were about 1,300 demonstrators."

"They seem to have reached a resolution. There was agreement and an announcement was made at 5 p.m.," he said in an interview.

Tint San, the secretary of the Hlaing Thayar Industrial Zone, said this wasn't the first time workers at the factory had staged protests.

Tint said he was still unfamiliar with the details of recent events at the factory, whose workers have frequently complained to the U.N. International Labor Organization (ILO) about their treatment.

Meanwhile, Cho Maung, spokesman for the Federation of Trade Unions of Burma, said the escalating standoff had drawn concern at the highest levels of government.

"We have heard that the minister for labor U Tin Tun himself will be going to the site of the factory. What the workers have demanded are the rights...in accordance with the basic law governing labor."

He said he had heard of clashes during the demonstration.

"We heard that there have been some beatings in some places. But we have not heard of any arrests up until now."

He said the Federation would submit the case to the International Labor Union and put pressure on the Labor Ministry in Burma if the dispute remained unresolved.

Thitsaphout Than Shwe and his evil regime have murdered raped and tortured the people of Burma for decades, how many more must die before that murdering little low life creature will be stopped. How many more families will lose loved ones because of Than Shwe continually murdering the people on a daily basis? Whether those people are murdered in prison or just shot after Than Shwe’s thugs illegally invade villages and murder the people who are defending their homes and trying to defend their children from either illegal induction into the army or enforced slavery. And how many more of your loved ones will be forced to find refugee in a refugee camp in Thailand. Brothers and Sisters how many more of your people must die, stop this traitor Thitsaphout Than Shwe now.