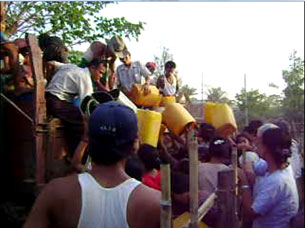 In a photo provided by a local resident, opposition National League for Democracy party members and other private donors distribute drinking water in Pegu, 50 miles north of Rangoon, May 13, 2010.
Local resident

BANGKOK—Burma is suffering from a major water shortage during the annual dry season, but authorities are slowing relief efforts, according to residents in the hardest-hit regions of the country.

Residents said the Burmese military government is attempting to project an image of maintaining control over the situation, even as the drought has led to several deaths in Rangoon and Pegu divisions.

They added that the junta-aligned Union Solidarity and Development Association (USDA) is refusing to allow some aid donations and is forcing organizations that provide relief to mark their vehicles with the USDA flag.

A young man from Dala township said local authorities were questioning aid workers and taking photographs of people who were distributing water earlier in the week.

“Some donors placed the USDA flag on their cars. Others refused and drove their cars on another route. But now there are fewer donors in this township, and many monasteries are facing water shortages,” he said.

“Local authorities are also distributing water, but they are only assisting their family members. They haven’t distributed water to the people. They even deny people water when they are asked for it.”

A relief worker in Kwunchangone township said many villages in the area are also suffering from drought and that the water distributed there is not enough to meet demand.

“Many villages in the area are suffering from severe water shortages after an accelerated evaporation of Burma’s ponds and reservoirs,” the worker said.

“The donors have been questioned by the authorities. The government cannot help the people, but they also don't want others to provide aid. They are suspicious of well-wishers who try to help the people,” he said.

“We are also afraid of an outbreak of disease because of the lack of drinking water and basic hygiene. There is no electricity in the city. It is difficult to pull water from the wells. How do we get water without electricity? We all have many problems.” 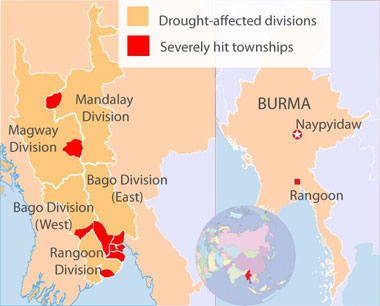 The statement said that a large number of water tankers had been sent out around the region to supply water to people in need and that authorities are tapping underground wells in urban wards with the help of citizen aid workers to meet previous levels of water consumption.

In a May 13 article published in an official newspaper, the government said that some residents of western Magway division and central Mandalay division were hospitalized due to high temperatures.

Of 11 hospitalized Magway division residents, seven died and four are receiving ongoing treatment, while no deaths have been reported from the 14 people hospitalized in Mandalay division, it said.

The article said that the Ministry of Health is issuing daily instructions on steps the public can take to protect themselves against high temperature via TV, radio, newspapers, and journals. It cited an “unnecessary loss of lives as some failed to follow the notifications.”
Not enough done

But aid workers said that the government hasn't done enough to warn the public and to provide them with relief following the weeks of drought.

Myo Myint Thein, a physician in Rangoon division, said the elderly are particularly vulnerable and need to be given better instruction on how to protect themselves from the heat.

“Old people, especially between 60 and 70, have died of heat. Some people who drink alcohol have also died. The death toll has reached 37 within  12 to 13 days. The number is a bit high,” he said.

“People lack awareness [of how to react] and they put wet blankets on their body to prevent heat. This is the wrong thing to do. You should not do things like that in this heat. Especially people in rural areas don't know about it. The death toll is only the number of people who died in urban areas.”

Shwe Zee Kwet, a donor from the Free Funeral Service, an organization that provides burial services to the poor, said the public has been forced to act on its own to deal with the water shortage crisis.

“We went to Pyawbwe village near Thakala Village in Bago division. They don't have safe drinking water. They only have polluted water. All the lakes are dried up. Villagers are trying to get water by digging wells, but there is no drinking water in them,” Shwe Zee Kwet said.

“People from Bago division are distributing water by themselves. We gave them plastic containers to bring water. And they contributed their water and cars. We are also providing fuel and other expenses to people who distribute water in villages,” she said.

“We try to distribute water twice a day, but sometimes we can do so only once a day.”

Chairman of the Free Funeral Service Kyaw Thu said he had donated 1 million kyat (U.S. $156,000 according to the official exchange rate) from his prize money as aid to assist those in need.

Burma’s military government is wary of both international and domestic aid groups and has routinely blocked relief efforts seeking to assist citizens affected by natural disasters.

The junta blocked aid and imprisoned members of NGOs providing assistance to homeless Burmese after Cyclone Nargis tore through the south of the country in 2007, leveling infrastructure and killing some 140,000 people.

Villagers in the worst-hit regions said they have been unable to rebuild their lives in the wake of the storm, which left millions with no home or livelihood.

Local and overseas aid workers said Burma’s ruling military junta deliberately blocked aid to victims of Nargis, and failed to ensure that fields were ploughed in time for the harvest. It has also jailed a number of private citizens, some of them well-known, for aiding cyclone victims.

The junta at the time was preoccupied with a national referendum on a new Constitution. It went ahead with the vote May 10, and announced that the constitution had been overwhelmingly approved. Amid an international outcry, the junta let relief agencies into the country almost four weeks after the storm.