Three Civilians Killed in Hostilities Between Myanmar Army And TNLA 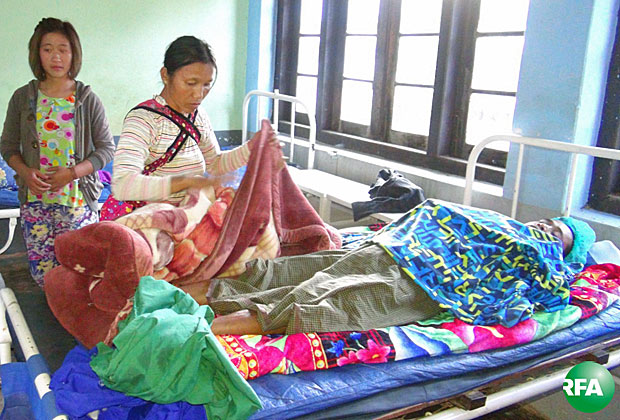 A civilian injured in fighting between Myanmar soldiers and Ta'ang National Liberation Army troops is treated at a hospital in Kyaukme township in Myanmar's Shan state, Dec. 27, 2016.
RFA

Three civilians were killed and eight others injured amid fighting between government forces and the Ta’ang National Liberation Army (TNLA) in Kyaukme township of volatile northern Shan state, a local official said Tuesday.

Those killed during the hostilities on Monday were all men, while the injured includes three children, two women and three monks, all of whom are being treated at Kyaukme hospital, said Shan state assembly legislator Sai Tun Nyan of the Shan Nationalities Democratic Party who represents the town of Kyaukme.

“We heard that three people who were killed were from the same family,” he told RFA’s Myanmar Service. “Their house was badly destroyed by heavy weapons as well.”

Both the government army and the TNLA have increased their troop strength in the area, signaling the possibility of more fighting, Sai Tun Nyan said.

Because of the possibility of an escalation in the fighting, local people are preparing to leave Kyaukme, he said.

The TNLA is part of the Northern Coalition of four ethnic militias that launched coordinated attacks on Nov. 20 on 10 government and military targets in the Muse township villages of Mong Ko and Pang Zai, the 105-mile border trade zone between Myanmar and China, and areas of Namhkam and Kutkai townships in war-torn Shan state.

The other members of the alliance are the Arakan Army (AA), Kachin Independence Army (KIA), and Myanmar National Democratic Alliance Army (MNDAA).

In early December, the group appealed for negotiations to resolve its conflicts with the government army, but it could not agree with the Myanmar government on the form that the talks should take.

The TNLA has also been fighting another ethnic armed group—the Restoration Council of Shan State/Shan State Army (RCSS/SSA)—in the region since late November 2015, about six weeks after the signing of a nationwide cease-fire agreement (NCA) between the government and eight of the country’s more than 20 ethnic armed groups.

The RCSS, the political organization that oversees the SSA, is a signatory to the NCA, but the TNLA is not.

After the RCSS signed the accord, Myanmar army forces joined it to launch the offensive against the holdout TNLA in Shan state.