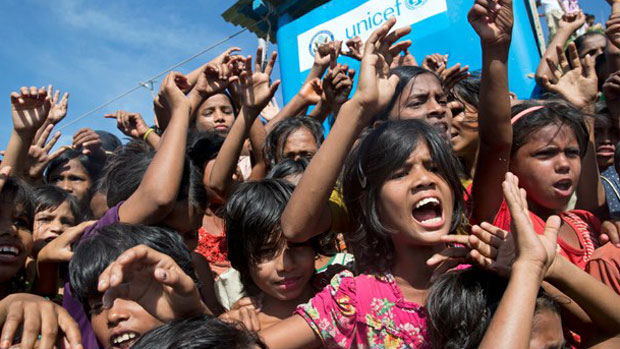 Asia-Pacific nations have pledged at talks in Bangkok to take steps, including legal reforms, to tackle statelessness, a key issue in the region.

More than half of the world’s 10 million people who are stateless live in Asia, with at least 1 million of them Rohingya Muslims from Myanmar, according to the United Nations.

Government officials from 16 Asian countries “have made commitments to take further steps aimed at preventing and reducing statelessness,” a statement from the U.N.’s refugee agency, UNHCR, said Friday at the end of a two-day meeting in the Thai capital.

“A number of states committed to taking specific steps, including measures to achieve universal birth registration and targeting hard-to-reach populations. Others said they would be tackling legal reforms, especially on issues related to childhood statelessness,” UNHCR said.

People who are not formally recognized as a national of any state under the operation of its laws are considered stateless.

Thailand, the Philippines, Indonesia, and Malaysia are among countries in the region grappling with the issue of stateless people living within their borders.

“One of the key things that I was inspired by today was that several states have said that they will not allow children on their territory to be stateless any more,” said Carol Batchelor, UNHCR’s Special Advisor on Statelessness.

The Bangkok meeting came ahead of high-level, global talks to be held in Geneva in October, as part of UNHCR’s 10-year #IBelong Campaign to End Statelessness.

Since the campaign was launched more than four years ago, governments have moved swiftly to contain the statelessness problem, U.N. officials said.

“In this region, some 50,000 people at least, that are known to us, now have a nationality that they didn’t have before this campaign was launched 4½ years ago. So that is a tangible example of some of the progress that’s been made,” Caroline Gluck, a spokeswoman for UNHCR, told BenarNews.

According to Jelvas Musau, senior regional protection officer (statelessness) at UNHCR, one of the main obstacles to addressing the issue is simply understanding it. People often confuse stateless individuals with refugees, he said.

“Refugees are not stateless people. They have their nationalities of where they came from and they will return to those countries. So statelessness is slightly different and once it’s understood properly, I think states will be very keen and eager to address it,” he told BenarNews. Rohingya Muslims sheltering in Bangladesh are an exception, as they are both refugees and stateless.

More than 700,000 Rohingya who fled a bloody military crackdown in Myanmar’s Rakhine state in 2017 are languishing in camps in southeastern Bangladesh. About 800,000 stateless Rohingya remain in Myanmar.

In Thailand, hundreds of thousands of people who have no official citizenship from any state are living in Thai territory, including tribespeople who have come from neighboring countries like Myanmar and Laos.

In Malaysia, authorities are dealing with stateless Rohingya as well as stateless children of Thais who crossed into Malaysian territory to flee from violence in Thailand’s insurgency-hit Deep South. And in the southern Philippines, there are stateless Indonesians living there who came over from Sulawesi island in Indonesia.

In their efforts to reduce the number of stateless people, it is important for countries to share information in their databases about such persons, Batchelor said.

“I think the way forward in improving data is to … have a procedure to determine if somebody is stateless,” she said. “If they are on the territory and they are not a national and they don’t have nationality anywhere else, then they are probably stateless.”

“So having a procedure that identifies and allows for numbers and statistics and data, so once the problem is identified, the solution can be brought to bear. It will be very helpful for the UNHCR and others to have improved statistical information.”

‘One of the proudest moments of my life’

At the Bangkok conference on Friday, an 18-year-old woman, who just a few weeks ago received Thai citizenship, told officials from 16 nations about how her life had changed.

Namphung Panya said she was able to travel to the United States to compete in a science and engineering fair a few days after receiving her citizenship, and would be able to continue her education at the university level.

“It was one of the proudest moments of my life,” she told the conference, according to UNHCR.

Namphung was born in Thailand and lives in Chiang Rai province near the border with Myanmar, the Bangkok Post reported. She is classified as stateless because her parents are from the Thai Yai ethnic group.

In June and July 2018, a small group of stateless people in Thailand drew international attention and scores of TV satellite trucks to a deep cave where a soccer coach and the 12 members of youth team were rescued more than two weeks after they became trapped by rising water.

The world soon learned that the coach and three team members were among the nearly one-half million stateless people registered in Thailand.

In less than a month, the Thai government awarded citizenship to the coach and players. Local reports at the time noted all four were born in Thailand, but were not declared citizens because of the Nationality Act.

Thai Human Rights Commissioner Tuenjai Deetes, who attended the meeting, said Thailand was working to register people but was limited by manpower issues.

“We registered more than 500,000 stateless people, but we have few officials to interview, document and fill in the nationality request which must be solid,” Tuenjai told BenarNews. “The civil service commission could not provide us with more manpower.”

Elsewhere in the region, Indonesia, the Philippines and Malaysia are also facing issues involving stateless people.

Decades ago, Indonesians sailed from North Sulawesi Province to remote sections of Mindanao island in the Philippines where they are undocumented and stateless, and therefore unable to return home.

In 2018, Indonesia’s Ministry of Foreign Affairs announced that thousands of passports were issued to Indonesians and Filipino-Indonesians to allow them to travel to their home country.

A Philippine Department of Justice official said that while his country did not have a specific law pertaining to statelessness, it managed to solve the issue with Indonesia. Adonis P. Sulit, an assistant secretary at the department, offered tips to other nations that could have similar concerns.

“It will be helpful if you have a particular person or group or office to deal with the stateless issue,” he told the meeting in Bangkok. “We were able to reduce statelessness through strong bilateral relationship with Indonesia.”

The Philippines was able to naturalize a large group of stateless persons, while Indonesia did the same for another group and a third was granted dual citizenship.

In 2016, Thai government officials traveled to Malaysia to discuss efforts to help stateless children of parents who escaped from the insurgency-wracked Deep South. Officials at the time did not say how many people would be affected by the efforts.

To combat the plight of statelessness involving children, Malaysia has declared that any baby born in the country is a Malaysian citizen if such citizenship to another country does not carry over through the child’s parents, according to officials at the meeting.

Childhood statelessness has a variety of causes including being born to a stateless parent, lack of registration at birth, migration and gender discrimination that prevents some women from passing their nationality to their children.