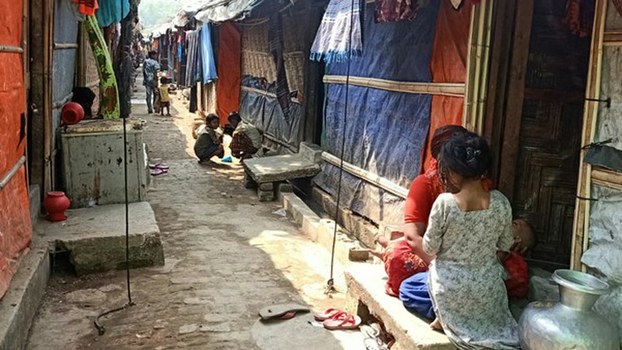 Rohingya at the Leda refugee camp in Teknaf, Bangladesh, keep their distance in light of the COVID-19 pandemic, March 27, 2020.

The United Nations on Friday urged Bangladesh to remove an internet blackout at Rohingya camps during the COVID-19 pandemic, while Human Rights Watch said the government was risking the lives of refugees by not lifting restrictions on their communications.

More than 1 million Rohingya refugees from Myanmar, including 740,000 who fled a brutal military offensive in Rakhine state in August 2017, are sheltering in crowded camps and settlements in southeastern Bangladesh.

“Communication is key to the timely and effective management of this situation, mobile data communications restrictions in the Rohingya refugee camps should be lifted,” Louise Donovan, a spokeswoman for the U.N.’s refugee agency, UNHCR, told BenarNews, an RFA-affiliated online news service, on Friday.

“Humanitarian partners are advocating to the government to re-establish internet connectivity within the camps, to ensure that all refugees have adequate access to information, and to enable communication between partners. Life-saving health interventions require rapid and effective communication,” Donovan said.

Citing national security and a need to maintain law and order, the government in September 2019 ordered mobile phone operators to block internet access to the Rohingya camps. The Bangladesh Telecommunication Regulatory Commission also asked providers to stop selling SIM cards to the Rohingya.

“The Bangladesh government is in a race against the clock to contain the spread of coronavirus, including in the Rohingya refugee camps, and can’t afford to waste precious time with harmful policies,” Brad Adams, Asia director at Human Rights Watch (HRW), said in a news release on Thursday.

“Authorities should lift the internet shutdown, which is obstructing crucial information about symptoms and prevention, or end up risking the lives of refugees, host communities and health care workers.”

On March 19, the United Nations, in a joint statement with the Inter-American Commission for Human Rights as well as the Organization for Security and Cooperation in Europe, urged governments worldwide to refrain from blocking access to the internet during the COVID-19 outbreak.

“Especially at a time of emergency, when access to information is of critical importance, broad restrictions on access to the internet cannot be justified on public order or national security grounds,” the groups said.

In Bangladesh on Friday, a government official responded that no decision had been made on the internet blackout at the camps.

“The issue of restoring internet facilities in Rohingya camps has yet to be discussed,” Telecom Minister Mustafa Jabber told BenarNews, adding his ministry would not make that decision on its own.

“We would implement it after getting directives from Home, Foreign and Disaster and Relief ministries. So far, we have not received any such directives,” he said.

‘We know little about the virus’

“Instead of preventing anxiety, the lack of accurate information is contributing to the spread of misinformation about the disease,” the global rights watchdog said.

A leader at the Kutupalong camp said the pandemic had panicked the Rohingya in his and other camps.

“But we know little about the virus. We could have known more if there were internet facilities,” camp leader Mohammad Nur told BenarNews, adding that Rohingya were trying to maintain social distancing.

No Rohingya have been diagnosed as positive for COVID-19, according to Mohammad Shamsu Douza, additional commissioner of the Refugee Relief and Repatriation Commission.

“However, four people who came from India and one from Australia have been put in quarantine at a UNHCR transit camp and hospital,” he told BenarNews. None have been diagnosed with the coronavirus.

Despite the internet blackout and restrictions on mobile phone devices in the camps, information about how people can protect themselves from the virus is being disseminated through radio spots, videos, posters, leaflets and messages in the Bengali, Burmese and Rohingya languages, according to Donovan of UNHCR.

Imams and other community leaders have also been helping spread the word, Donovan said.

“The humanitarian community is taking all preventive and precautionary measures to mitigate the risks of COVID-19 for the people we serve, as well as our own teams, while also ensuring that essential activities and facilities, to the extent possible, must continue,” the U.N. official told BenarNews via email.

The stepping up of hygiene promotion, staff training for infection prevention and control, and the mapping of isolation facilities are among measures that aid agencies and groups are taking to safeguard the residents of the crowded refugee camps from COVID-19, she said.

Meanwhile in the capital Dhaka on Friday, Bangladesh officials reported four new coronavirus cases at the national level, bringing the total number of cases to 48. Bangladesh has also recorded five deaths from COVID-19.

Globally, more than 25,400 people have died and at least 566,000 have been infected, according to the latest data compiled by disease experts at Johns Hopkins University in the United States.