India: Two Rohingya Groups in Custody after Trying to Cross Into Bangladesh 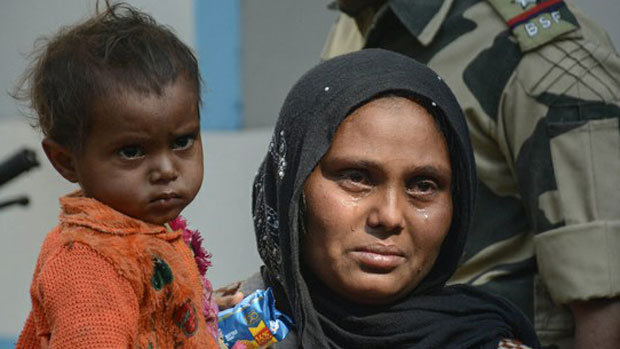 A Rohingya woman, who was detained by Indian officials in the northeastern state of Tripura, cries as she holds a child after they were stuck in no-man’s land along the border with Bangladesh for more than three days, Jan. 22, 2019.
AFP

Thirty-one Rohingya trapped in no-man’s land after trying to cross into Bangladesh were transported by India’s Border Security Force (BSF) to a prison in Tripura state on Tuesday, after a second group was removed from a bus and taken into custody the night before, officials said.

The detention of the first group of Rohingya occurred after BSF members and their Border Guard Bangladesh (BGB) counterparts failed to agree on what to do with the refugees who tried to cross the frontier on Friday night, a senior Indian official said.

“The group of Rohingya was stuck near the Raimora border outpost in no-man’s land along the India-Bangladesh border for nearly three days. The 31 Rohingyas were taken around 11 a.m. Tuesday to the Amtoli police station in Tripura and were charged with illegal infiltration under the Foreigners Act,” the senior BSF official who requested anonymity told BenarNews, an RFA-affiliated online news service, by phone.

The Home Ministry had approved taking the group into custody, the official said, adding that Bangladeshi and Indian personnel had accused each other of trying to push the Rohingya Muslims across the border.

“Information was received from reliable sources that BGB brought Rohingya from their side to push them into India,” BSF said in a news release.

The Indian official said the Rohingya were given “comfortable” temporary accommodations.

On Monday night, 30 Rohingya, including 12 children, were arrested in Assam – another northeastern Indian state that borders Bangladesh – after they boarded a bus, police said. The detainees were interrogated by Assam police before being produced in a court and remanded to judicial custody on Tuesday.

Since early December about 1,300 Rohingya have fled India, settling in Bangladesh refugee camps, according to Bangladesh’s commissioner for Refugee Relief and Rehabilitation. In India, the leader of a New Delhi-based NGO, the Rohingya Human Rights Initiative, said Rohingya feared an immigration crackdown by the central government.

A Bangladesh official, meanwhile, confirmed that the 31 Rohingya were sent back to India.

“Since Sunday, we, the BGB, had two meetings with our Indian counterparts on this issue. We told them that the Rohingya people belong in Indian territory,” Lt Col. Mohammad Gulam Kabir, commanding officer of the BGB post in Brahmanbari district, told BenarNews. “They hold refugee cards issued by the UNHCR in India. They cannot be pushed into our territory.”

“The Indian BSF officials told us that they would take the matter to their higher authorities and act accordingly. Finally, the Rohingya were taken back from the no-man’s land,” he said.

“They were frustrated with the way they had been living in Jammu and Kashmir. They traveled for seven days to reach the border. And they were offloaded from trucks to enter Bangladesh illegally,” Kabir said. “We have been continuing our vigil as the refugees may try to re-enter Bangladesh again.”

India sent a dozen Rohingya back to Myanmar earlier this month and in October 2018. While India has not carried out any large-scale deportation, Prime Minister Narendra Modi's Hindu-nationalist government in October began gathering biometric data of Rohingya to verify whether they had U.N. refugee status, officials said.

The plight of the Rohingya drew international attention after hundreds of thousands of them fled from Myanmar’s Rakhine state to refugee camps in Cox’s Bazar, Bangladesh, following a police crackdown against them in August 2017.

While an estimated 720,000 Rohingya settled in refugee camps since the crackdown, joining 300,000 already in Bangladesh, thousands more are scattered across India despite a threat by the ruling Hindu nationalist Bharatiya Janata Party in 2017 to deport as many as 40,000 to Myanmar.