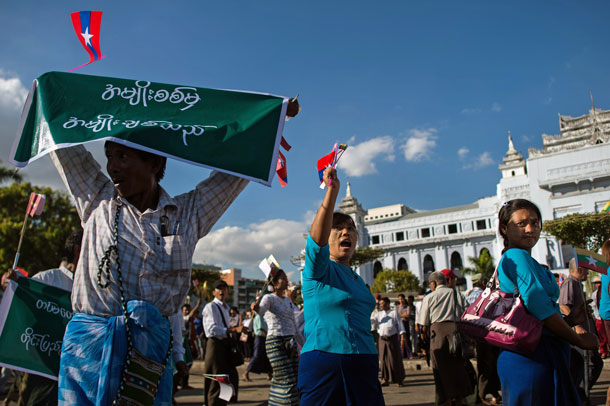 Mortar shelling by the Myanmar army during hostilities between government troops and an ethnic armed group forced more than 2,000 internally displaced persons to flee their camps in Kachin state late Tuesday and early Wednesday, a refugee said.

Government soldiers captured the Kachin Independence Army’s (KIA) third battalion headquarters in Waingmaw township on Tuesday in airstrikes and attacks by infantry troops, cannon, tanks, and heavy weapons, according to an announcement on Tuesday by Myanmar’s commander-in-chief’s office.

There were no immediate reports of any casualties or injuries.

Khun Ra, an internally displaced person (IDP) who was living at the Zai Awng refugee camp, told RFA’s Myanmar Service that she has heard the fighting between the KIA and government army for the past three months, and that the hostilities have been getting worse.

“We are fleeing out of fear because of the mortar shells from the government army as we can no longer live in the camp,” she said. “Many of us are now on Waingmaw Road, and we can’t go forward because the fighting is ahead, but we can’t go back to the camp.”

The KIA and three other ethnic militias have been engaged in a new round of hostilities with Myanmar’s armed forces in the war-torn state since Nov. 20, when they teamed up to launch coordinated attacks on 10 government and military targets in three Shan state townships and the 105-mile border trade zone between Myanmar and China.

Government soldiers have seized other KIA outposts, including the militia’s strategic mountaintop Gidon outpost in Waingmaw township on Dec. 16.

The clashes have resulted in an increase in the number of internal refugees and civilian deaths and have stymied the government’s efforts to bring warring ethnic militias to the negotiating table.

The United Nations estimates that more than 100,000 people have been displaced by fighting between government soldiers and ethnic armed groups in Kachin and the northern part of neighboring Shan state.

Attempts earlier this month by the government’s Peace Commission to discuss an end to the hostilities individually with the four militias comprising the Northern Alliance militias went nowhere, though the groups indicated a willingness to hold all-inclusive discussions.

Kachin soldiers, who have long been at war with Myanmar army, told the Associated Press that the government has increased its offensives, including airstrikes, since the new administration under de facto national leader Aung San Suu Kyi took over in April.

The Nobel laureate, who also serves as Myanmar’s state counselor and foreign affairs minister, has made ending the country’s decades of civil wars and attaining lasting peace the main mission of the government under her National League of Democracy (NLD) party.

Talks with Wa and Mongla

On another front, a government peace delegation led by military lawmaker Thein Zaw is heading to the town of Lashio in northern Shan state to hold peace talks with the leaders of two other rebel militias—the United Wa State Army (UWSA) and the National Democratic Alliance Army (NDAA), also known as the Mongla Army.

The peace group will meet with leaders from the UWSA—Myanmar’s largest non-state army—in the town of Pangkham in Wa Special Region 2 on Thursday and with Mongla leaders on Friday in the town of Mongla, said Kyi Myint, spokesman for the Mongla group.

“We are going to talk about peace and development,” he said. “We can only say exactly what we have talked about after meeting.”

The Wa and Mongla ethnic minorities live in a mountainous region of Shan state on the border with China and have strong cultural links with the country.

The UWSA was one of the ethnic militias that refused to sign a nationwide cease-fire agreement (NCA) brokered by the former government in October 2015.

Though the UWSA and NDAA have a long history of close relations, their ties were strained by Aung San Suu Kyi’s peace initiative, the 21st-century Panglong Conference, where Wa representatives attempted to coerce the NDAA into sending a low-level delegation to attend the talks that began on Aug. 31.

USWA delegates walked out of the conference because of an apparent misunderstanding over whether the group was a participant or observer at the peace talks.