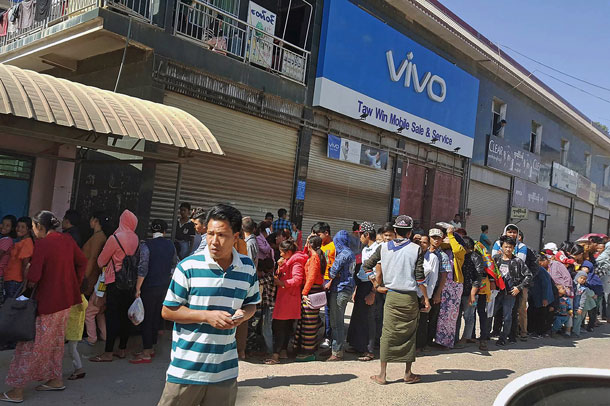 A long line of Myanmar residents in the town of Muse in northern Shan state wait to cross the border into southwestern China's Yunnan province, Nov. 22, 2016.
AFP

The relatives of a 17-year-old Myanmar woman trafficked to China more than a year and a half ago said Wednesday that they recently had contact with her but fear that her Chinese abductor might sell her again, amid efforts by NGOs and anti-human trafficking authorities to locate and rescue her.

In April 2018, a local couple from the teenager’s neighborhood in Taungoo township in southern central Myanmar’s Bago region told her they could arrange for her to get a job in China, where salaries for low-skilled work are higher than they are in Myanmar, the young woman’s mother said.

Unbeknownst to the young woman, Thuzar Aye, the couple were brokers for human traffickers, and once she was in their hands, the person for whom they worked sold her to a Chinese man in the border town of Ruili across the river from Muse in Myanmar’s northern Shan state, her mother said.

Thuzar Aye was forced to have the man’s baby later that year, she said.

Now that Thuzar Aye’s family recently had contact with the teenager, her relatives say they are worried that she might be sold again to someone else.

“My daughter wanted to help support the family as a grownup since we have been facing hardships,” Thuzar Aye’s mother, Tumar, told RFA’s Myanmar Service. “We trusted the brokers and relied on them to find her a job, so we let her go with them.”

“Since then, we have inquired about her whereabouts in many ways,” she said. “We didn’t know my daughter had been trafficked.”

Thuzar Aye’s mother appealed to the public to help her daughter return home.

“It has been over a year,” she said. “I have been so concerned about her that it has left me emaciated.”

“I didn’t accept it,” Tumar said. “I said I would accept the money if I could talk with my daughter. He repeatedly tried to give me that money, saying my daughter had a decent job in Ruili.”

Tumar said that when she was finally convinced that Thuzar Aye did have a good job in China, she accepted the money, though Soe Naing took a cut of 50,000 kyats (U.S. $32) as a broker fee.

Soe Naing and his wife had earlier told the teenager that she would get a job that paid 300,000 kyats (U.S. $190) a month at a restaurant in the border town, her mother said.

“It happens all the time’

Molly San, a volunteer who helps trafficked Myanmar women and girls return home, said Thuzar Aye was among five young women trafficked to Ruili at the same time, although three of them were sent back to Myanmar because their Chinese “hosts” did not like them.

“The girls were taken by Soe Naing, also known as Pauksi,” she told RFA.

“The girl [Thuzar Aye] told me that she had been sold in Ruili,” Molly San said. “They were [all] taken away on April 25, 2018. Thuzar Aye and another girl named Gyan Gyan were left behind, and three other girls returned. The Chinese didn’t like their appearances.”

Though Thuzar Aye and Gyan Gyan were sold to “hosts” in China, the former succeeded in contacting her family members this year about her ordeal, prompting authorities to detain Soe Naing and his wife.

Those who violate Myanmar’s 2005 Anti-Trafficking in Persons Law prohibiting sex and labor trafficking face sentences of 10 years to life in prison.

Despite the law’s stringent criminal penalties, human trafficking remains rampant in conflict-affected northern Shan state along the border with China and in other states and regions where a dearth of income-earning opportunities places woman at risk of being trafficked.

“In China, they feed the newborn babies milk powder, while the trafficked girls are sold again to another client,” said Thaung Tun, a member of the Karuna Foundation, a rights organization that assists victims of human trafficking. “It happens all the time.”

Now Thuzar Aye’s family is concerned it will happen to her, she said.

“Her family members have issued appeals many times,” she added. “So far, there’s been no progress.”

Anti-human trafficking authorities and officials from other relevant departments are not working effectively to help trafficking victims like Thuzar Aye, Thaung Tun said.

RFA could not reach officials from the Myanmar Police Force’s Anti-Human Trafficking Unit for comment.

The police officer who filed the case against Thuzar Aye’s traffickers said police are working on rescuing her.

“We have filed a case for Thuzar Aye,” he said. “We had planned to rescue her before filing the case. We are working through a regular procedure as mandated by … the anti-human trafficking law.”

So far, no progress

Thuzar Aye, who is still in southwest China’s Yunnan province, first contacted Lin Lin, a Myanmar migrant worker from Shwebo district in Mandalay region through social media earlier this year, and he got in touch with her family.

“After we became acquainted, she asked me for help,” he said. “When I returned home for the holidays, I contacted her parents at their address in Taungoo.”

“There are many cases like that of Thuzar Aye in China,” Lin Lin said. “I cannot effectively help her since I’m working full-time in China. Thuzar Aye is lucky that her message coincided with my return to Myanmar.”

Thuzar Aye connected with volunteer groups helping trafficking victims after she reached her parents, he said, adding that at least six other women have also contacted him for help to escape their traffickers.

The teen's family meanwhile has contacted the Chinese consulate in Myanmar’s capital Naypyidaw, though there has been no further word on her.

RFA could not reach officials at the consulate for comment because no one was available on account of a holiday.

“So far, there has been no progress,” he said. “We have informed the Myanmar consular office [in China] about it. We reported it to the Anti-Human Trafficking Unit, [and] they said that they are working on it.”

“Because I’m a native of this township, I have regular contact with the girl’s family, and I got to talk with the girl,” he added. “I am very sorry for her. I will help her at all costs.”

Each year during the past decade, hundreds of women from Myanmar have been trafficked to China to be sold as brides to Chinese men or used as surrogate mothers, according to the Karuna Foundation.

Police Chief Kyaw Nyunt of Myanmar’s Anti-Human Trafficking Task Force in Muse district told RFA in February that many trafficked women have been tricked into crossing the border with promises of a better life, but once they arrive in China, they are at the mercy of traffickers.

He said most of the trafficked victims are women from central and lower Myanmar — areas where poverty rates are above 30 percent and reach as high as 46 percent in Ayeyarwady region.