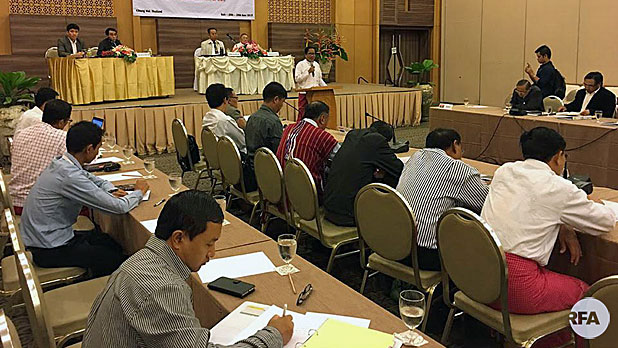 Four ethnic armed groups belonging to an umbrella organization for militias that have not signed a nationwide peace pact with the Myanmar government have split from the body over a disagreement about the pact and are solidifying their ties to the country’s largest rebel faction, sources with knowledge of the situation said Thursday.

Some members of the United Nationalities Federal Council (UNFC) told RFA’s Myanmar Service that the organization has decided to let the Ta’ang National Liberation Army (TNLA), Myanmar National Democratic Alliance Army (MNDAA), and Kachin Independence Organization/Kachin Independence Army (KIO/KIA) leave the group after they requested to do so.

The departing groups want the government’s nationwide cease-fire agreement (NCA), which some ethnic militias have signed and others have not, to include all rebel organizations.

The UNFC’s central executive committee made the decision during a meeting in Chiang Mai, Thailand, that convened on Tuesday and will run until June 29.

The three ethnic militias, which are still engaged in ongoing separatist conflicts with the Myanmar military, have not signed the NCA.

A fourth ethnic militia—the Wa National Organization (WNO), the political wing of the Wa National Army that operates in northern Shan state and near Myanmar's border with Thailand—has also left the UNFC, some of the organization’s members said.

Representatives from other ethnic armed groups requested that the KIO not leave the UNFC, but KIO leaders said the militia will stand with the “northern allies,” or Pangkham Allies—a group of seven ethnic armed militias that has formed a coalition led by the United Wa State Army (UWSA), Myanmar’s largest nonstate army.

The northern allies made several unsuccessful attempts to join the UNFC as a unified force, and have now formed an alliance with the China-backed UWSA, which has emerged as a key player in Myanmar’s peace process, a development seen as boosting Beijing’s influence over its violence-ridden neighbor.

The four militias that have left the UNFC have agreed to let La Jar, the KIO’s secretary general, and the KIO’s Colonel La Aung continue to communicate with the umbrella organization, the sources said.

The UNFC declined an invitation from the Myanmar government to attend the second session of the 21st-Century Panglong Conference in May, an effort led by the country’s de facto leader Aung San Suu Kyi to end decades of ethnic separatist civil war.

The Arakan Army, KIA, TNLA, and MNDAA were invited to the conference as observers rather than full participants, because they are involved in ongoing hostilities with the national army.