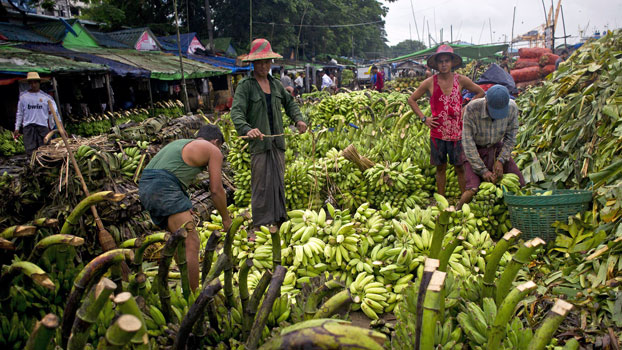 The six people from Jinghphaw Nadi Company have been operating the plantations near Aung Myae Thar No. 1 and No. 2 villages in Waingmaw township since 2018 and now have expanded their growing areas by more than 300 acres in the two communities.

“The Forestry Department has filed charges against the company for the illegal occupation of the forest reserve area,” said Zaw Bauk, administrator of Aung Myae Thar No. 2 village.

“These foreign nationals were reportedly living in the forest reserve area,” he said.

The company manager was released on bail for health reasons, while the others are being held in the township jail, Zaw Bauk said.

“The prosecution process hasn’t started yet,” he told RFA’s Myanmar Service. “We are still checking out the evidence presented by the Waingmaw township Forestry Department.”

RFA could not reach Jinghphaw Nadi Company for comment.

Area residents have long complained about banana cultivation resulting in losses of farmland, deforestation, the destruction of natural habitats, low wages for laborers, and damage to their social and economic well-being.

Aung Myint, chief of Khauksint village, told RFA in March that residents were very concerned about the impact of pesticides from nearby banana plantations.

“When people passed by the plantations while [workers] were spraying chemicals, they suffered from bleeding and fainting, and some were hospitalized,” he said.

“When we complained to department officials, they said they would look into the matter, but later on we found out that they favored the companies, so they didn’t do anything,” he said.

Renowned for its heroin production, Kachin state has implemented crop-substitution programs in recent years to replace the poppy cultivation that produces opium.

Earlier this year, Kyaw Kyaw Win, Kachin state’s minister of agriculture, livestock, and irrigation, told RFA that officials had not issued permits for banana plantations, although some companies had planted banana trees on fallow land and on farmland where fruit trees are allowed to be grown.

At the time, he also said he would submit a proposal to the state government to set up a special committee whose subcommittees would look into illegal plantations and their impacts on the environment and local labor.

Controversial China-backed tissue-culture banana plantations, banned in Laos and Thailand, began popping up in Kachin state about 12 years ago and have quickly expanded in Waingmaw township, which lies alongside the Irrawaddy River near the state capital Myitkyina.

A research report issued earlier this year by the local NGO Land Security and Environmental Conservation Network indicated that that there are more than 100,000 acres of banana plantations in the state's Myitkyina and Bhamo districts.

Banana plantation operators have been accused of taking over land previously leased from authorities by locals, many of whom have been displaced by armed conflict and are living in temporary camps in Kachin state, the online journal The Irrawaddy said in a March report.