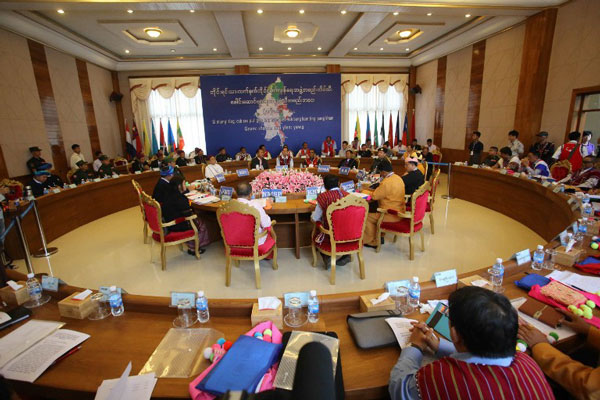 A group of ethnic militias decided on Friday not to sign the Myanmar government’s nationwide peace pact on the last day of their three-day summit at the headquarters of the country’s strongest ethnic rebel force, but instead formed a committee to discuss a “new path to peace,” a military official from the conference said.

The meeting, hosted by Wa and Mongla ethnic groups from the mountainous region of eastern Myanmar’s Shan state on the border with China, was held at the headquarters of the United Wa State Army (UWSA)—Myanmar’s largest nonstate militia—in Pangkham, the administrative capital of the militia's territory.

Col. Ta Phone Kyaw, general secretary of the Ta’ang National Liberation Army (TNLA), said the participants agreed on nine points, which included not signing the NCA, but rather come up with a new way to forge peace.

“Having a nine-point agreement is something through which we can show our ethnic groups’ unity despite sustaining offensive attacks from government military,” he said.

Eight ethnic armed groups signed the NCA in October 2015. Other militias did not endorse the pact because they objected to its lack of all-inclusiveness or because they were—and continue to be—engaged in hostilities with Myanmar’s military.

“We think that the government military needs to stop its offensive attacks and hold political dialogue,” Ta Phone Kyaw said.

The newly formed committee will try to hold discussions with national government and military representatives to determine what the new approach will be, he said.

On Thursday, UWSA chairman Bao Youxing told delegates at the meeting in Pangkham that “a new path to peace” is necessary because the government’s efforts to get other ethnic militias to sign the NCA have lost their momentum, Agence France-Presse reported, citing a leaked version of his speech as the source.

The civilian-led government plans to hold the second meeting of the 21st-Century Panglong Conference of peace talks in March.

But Ta Phone Kyaw said the non-NCA signatory groups cannot yet say if they will participate in the summit.

Ethnic leaders said they will try to resolve political problems through political means and discuss with government representatives the 15 points that the UWSA submitted during the first round of the Panglong Conference last August and September.

UWSA delegates walked out of the first round of peace talks because they were designated as observers rather than participants.

Myanmar’s de facto leader Aung San Suu Kyi has been leading efforts to end decades of civil wars between ethnic armed groups and the military and forge peace. But ongoing skirmishes in Kachin and Shan states in the country’s north have threatened to derail the process.

Thank you for reporting on the condition of ethnic minorities in Burma. I appreciate you highlighting their views & perspectives on Burma's flawed official peace process. In media reporting, tragic suffering such as the Rohingya's is often portrayed as "communal violence", when in reality they are the victims of a persecution. identifying the situation in Burma correctly is very helpful.