Bodies of Four Victims Recovered From Myanmar Coal Mine Collapse 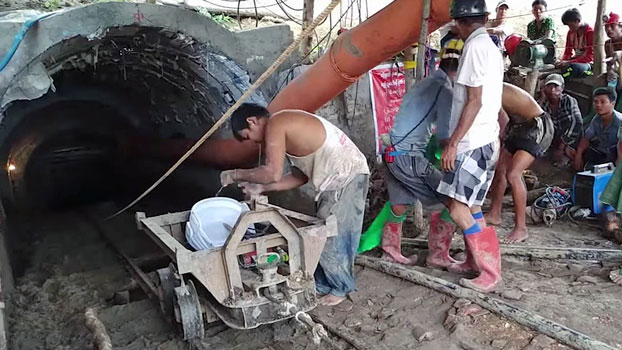 A worker places equipment in a cart before sending it down a mine shaft during search operations at a mine in Minhla township, central Myanmar’s Magway region, Aug. 27, 2019.
RFA

Rescue workers have recovered the bodies of four miners killed in a coal mine collapse three days ago in Minhla township of central Myanmar’s Magway region after water from torrential rain breached area levies and poured into the shaft, translators for the company said Wednesday.

The first two bodies recovered on Monday were identified as those of Soe Aung, 19, from Kyauk Htaung village in Minhla township, and Paing Soe Win, 28, from Hla Kaya village in Ann township, they said.

Rescuers on Tuesday recovered the bodies of Naing Htet Oo, 20, and Aung Chanthar, 16, both from Ann township, they said.

The four workers who died were inside the mine’s 600-foot-deep pit when it collapsed, but no details of the causes of death were available.

On the day the disaster occurred, the Inngyin Taung mining company was conducting a test run of the operations, the translators told RFA’s Myanmar Service.

The company, which employs some 40 workers, including Chinese technicians, is reportedly owned by a Myanmar national, according to Chinese translators who were on the scene the day after the accident.

“The water poured down into the mine so rapidly that they could not climb up to escape,” Sai Aung Lwin, a Myanmar translator for the company, later told RFA. “The heavy rain was unexpected and unprecedented. It’s tragic.”

“We went there, tried to stop the water, and then pumped the water out throughout the night,” said translator Chan Myae. “The flooding was gone the next morning.”

Local police have opened an investigation into the incident, and mining ministry officials from Naypyidaw have inspected site to determine whether it was operating in accordance with standard procedures, said Myint Zaw, Magway region’s minister of natural resources and environmental conservation.

The local government allows small Myanmar businesses to operate mines in Magway region, but not foreign individuals or entities, he said.

Nine mining companies operate about 40 small and medium-sized coal mines in the Minhla coal-mining area, producing a total of about 2,000 tons of coal per month, according to a report by the online journal The Irrawaddy.