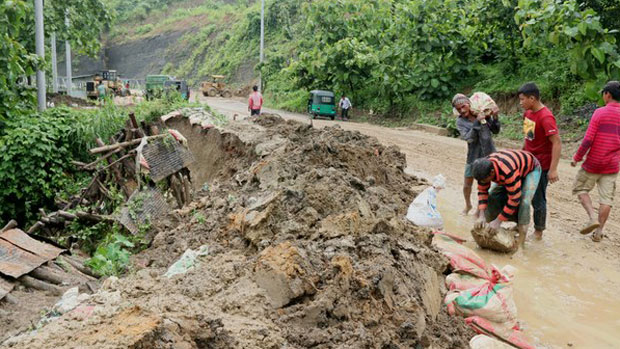 At least 12 people including women and children were killed as of Tuesday and several others went missing as torrential rains wreaked havoc and spawned landslides in hilly Bangladesh districts near the world’s largest refugee camp, officials said.

Landslides occurred in Rangamati and Cox’s Bazar, in an area bordering Myanmar’s Rakhine state, from where about 700,000 Rohingya Muslims fled following a military crackdown in August 2017, officials said.

“Most of the victims were buried under mud when surrounding hills gave way,” he told BenarNews, an RFA-affiliated online news service.

A Rohingya youth, Mohammad Ali, died after a tree fell on him in Ukhia, where he took shelter after fleeing violence in Myanmar eight months ago, said Abul Khair, officer-in-charge of the Ukhia Police Station.

“So far, more than 200 Rohingya families in five camps have been affected as monsoon rains lashed the camps for the last two days,” he told BenarNews. “The shacks have been damaged, deluged or destroyed since the weekend.”

Rangamati, Bandarban and Khagrachari districts in the region had been cut off from the rest of the country after heavy rain churned up debris that blocked roads, officials said.

“They are struggling to reach people because of the difficult terrain,” he told BenarNews.

The first heavy monsoon rains of the year could be an early test for refugees and humanitarian agencies in Bangladesh, Andrej Mahecic, spokesman of the U.N. refugee agency UNHCR said in a statement Tuesday.

Mahecic said at least one child died after torrential rains, bearing winds of up to 70 kph (43 mph), lashed through refugee settlements in Cox’s Bazar this weekend, causing 37 landslides and affecting about 11,000 people.

Cox’s Bazar currently shelters 900,000 refugees, including 720,000 who arrived in Bangladesh since Aug. 25 last year, he said, warning that based on the agency’s aerial mapping of the settlements, up to 200,000 people could be at risk of landslides and floods.

On June 13 last year, at least 130 people were killed in landslides in Rangamati, Bandarban and Chattogram districts, officials said.

“So far, more than 14,000 refugees at high risk of landslides across the settlements have been relocated to safer areas,” Mahecic said. “More land is urgently needed.”