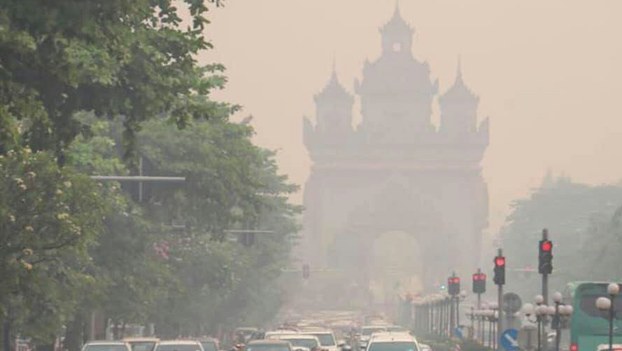 Smog covers the streets of Vientiane, Laos in April, 2019.

Residents of Laos’ capital Vientiane have been forced to endure a blanket of heavy smog caused by slash and burn agriculture since March.

A prolonged period of low atmospheric pressure in the Southeast Asia region is preventing the smog from clearing up and as the capital becomes hotter, residents are becoming increasingly concerned for their health.

“Some days in the capital when you look up, you can’t even see the sky,” said a man from Vientiane in a recent interview with RFA’s Lao Service.

An official of the Lao Health Ministry said the ministry has advised people to take precautions when not indoors.

“The smog this year is way worse than last year. We’ve notified people in Vientiane and the northern provinces that they should wear masks when going out,” he said.

The ministry issued a warning this week saying that air pollution was in the orange zone on Laos’ air advisory index, meaning the air is polluted and dangerous to the health of people.

According to the 2018 Environmental Performance Index, Laos was the most polluted country in ASEAN, a ten-nation regional grouping.

The main cause of the foul air conditions is slash-and-burn agriculture, a process by which farmers in forested regions clear the land by burning it.

“It’s been smoggy because the farmers are burning their fields and rice paddies. When they burn the fields, the fire spreads to other places,” said an official of the Natural Resources and Environment Ministry.

The resulting layer of ash makes the land fertile for a few years, but after that the land becomes useless and the farmer must find more forested land to burn.

“During Lao New Year [which falls in mid-April], when driving in the North I saw a lot of forest fires [caused by] farmers burning their rice fields. The air in and around Luang Prabang is very dusty,” said a Lao environmentalist.

The ministry official said that fighting the forest fires has been a challenge.

“We can’t extinguish the fires because we don’t have enough manpower or high-tech equipment, like airplanes,” said the official.

A big contributor to the smog in the capital was a huge fire in Vientiane’s Phou Pha Nang National Protected Forest that reduced almost 100 hectares of the forest to ash. Lao media has said that smoke from that disaster remains in the sky above the capital to this day.

On a small scale, slash-and-burn cultivation is not a problem. It has been practiced in forested regions for thousands of years worldwide, but in modern times the scale of damage that can be caused by this method, both to the forest and to air quality has multiplied exponentially.

The practice is prominent among ethnic groups living in the mountains, and they usually begin clearing and burning land in March and April every year.

Greenpeace Thailand’s director Tara Buakamsri and other experts blamed seasonal smog in the Mekong area on monoculture maize farming in a recent report in The Nation, a Thai English-language newspaper. 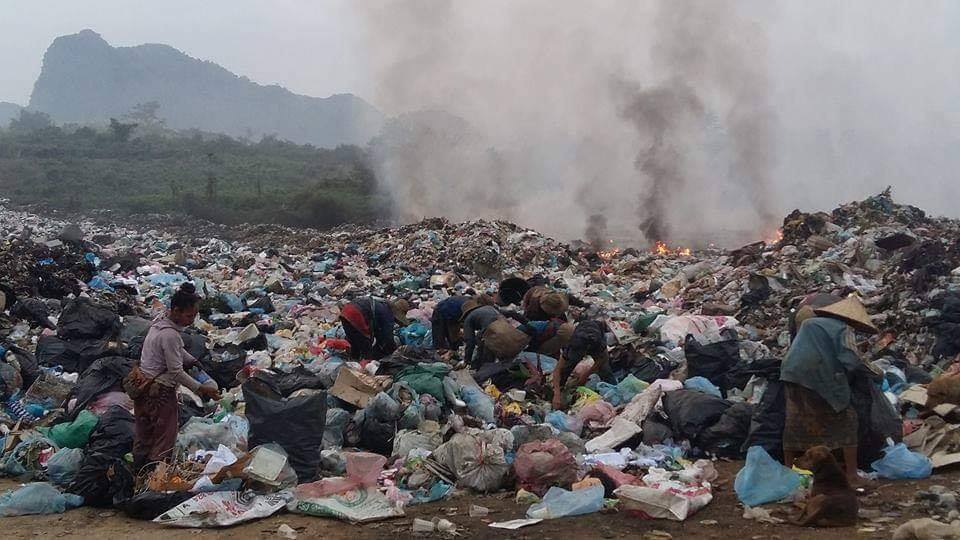 Slash and burn agriculture is not the only culprit. People living in cities and towns also routinely burn garbage, especially after the New Year celebration.

Residents of Vang Vieng told RFA that a large trash dump near the city was left burning for several days after it had been lit on Saturday.

“We can’t sleep at night because the smoke [from the dump] comes close to our village. We can’t even breathe,” said one resident.

After receiving many complaints, the district authorities are looking into the matter. An official of the local government said, “We’re going to inspect the situation and try to solve the problem.”

There are no official reports on the number of people who have fallen ill because of the smog. The government has said that it is making an effort to curb slash-and-burn agriculture, but stopping it is difficult.

Two years ago, an official of the agriculture and forestry department of Xayaburi province told RFA that they had orders from the central government to control the practice better.

“But some farmers burn their land at night,” the official said.

The Slash and burn agriculture needs to be totally suppressed! I can witness that such primitive and harmful practice is still widely carried out in the Northern parts of Vientiane Province.