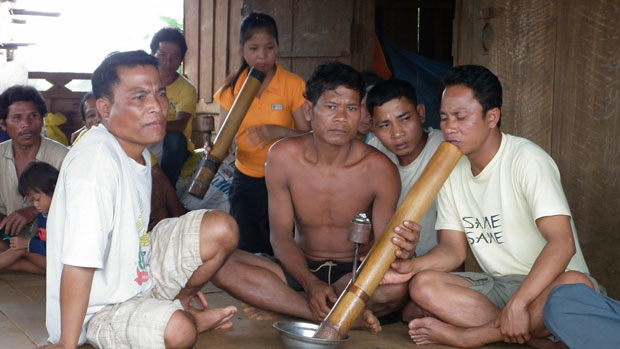 Yeub villagers in the Sekong province of Laos are shown in a 2012 photo.
RFA

Two Lao villagers who were detained in 2017 for protesting their loss of land awarded by the government to a Vietnamese rubber company were recently released from prison after serving their sentences in full.

Identified by sources as Nai and Bountaen, the two were initially arrested with 13 other protestors from Yeub village in Sekong province’s Thataeng district.

“Nai was released on September 20,” a villager told RFA’s Lao service on the condition of anonymity,

“Bountaen was freed on September 30. They spent two years in custody, which was the sentence handed down by the provincial court in June,” the villager said.

The group of 15 protesters were taken into custody by police in July 2017 for obstructing workers and cutting down trees on land granted by the government to a Vietnamese rubber company in what is believed to have been a 50-year concession.

Several of those detained were beaten or subjected to electric shocks in the days following their arrest, with many later reported to be malnourished and in failing health, relatives told RFA in earlier reports.

Another, a man named Somsavanh, died in jail on Jan. 29, 2018 in what authorities described as a “suicide,” though a relative said the man’s funeral was later arranged by authorities, leaving family members unable to participate or perform religious rites.

Five of the original 15, two of whom were underaged, were released prior to the sentencing without explanation. The remaining nine were sentenced in June 2019, and one was released shortly after.

Vanida Thephsouvanh, chairperson of the Paris-based Lao Movement for Human Rights told RFA that she believed their initial arrest was unjust.

“They should never have been arrested because they were only practicing their basic rights to their land,” she said.

“It is a shame that the court did not grant them justice, especially when some of the detainees were 14 or 15 years old.”

Regarding Somsavanh’s death in custody, Vanida said, “He did not want to die in prison. He wanted to be freed so he must have been tortured to death somehow. All these villagers must be released immediately.”

CORRECTION: A previous version of this report incorrectly stated that seven of the sentenced protesters remained in prison.  Currently six remain.