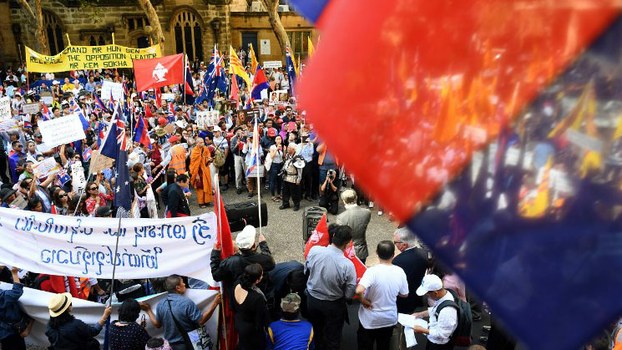 Exiled Lao democracy activists on Monday gave a guarded welcome to the European Union’s human rights dialogue last week with Communist authorities in Laos, but called on Brussels to apply more pressure on Vientiane to sign global treaties and adhere to them.

After the meeting on March 15 in Brussels, the EU issued a statement saying that “during the dialogue, the delegations had the opportunity to engage on a wide spectrum of sensitive issues in a constructive and meaningful manner.”

The EU said topics for the eight round of human rights dialog included ratification of international human rights conventions, rights of vulnerable groups, women and children's rights, human trafficking, freedom of assembly and association and freedom of expression.

“The EU expects the Lao PDR to uphold its commitments under national and international law and to ensure the implementation of freedom of expression, association and peaceful assembly which are guaranteed by the national Constitution revised in 2015, and by the International Covenant on Civil and Political Rights,” said the statement.

“Individual cases of persons who have been detained or have disappeared,” were also raised, the EU statement said, adding that Brussels urged the Lao government to ratify the International Convention for the Protection of All Persons from Enforced Disappearance.

In December, supporters and family members marked the fifth anniversary of the disappearance of Sombath Somphone, who received the 2005 Ramon Magsaysay Award for Community Leadership — Asia’s equivalent of the Nobel Prize — for his work in the fields of education and development.

Sombath went missing on Dec. 15, 2012, when police stopped him in his vehicle at a checkpoint on the outskirts of Vientiane. He was then transferred to another vehicle, according to police surveillance video, and has not been heard from again. Rights groups suspect that government-linked organizations or criminal elements may have abducted him.

Exiled activists in France and Australia took note of the talks in Brussels, led by David Daly, head of the South East Asia Division at the European External Action Service, and Phoukhong Sisoulath, director-general of the Department of Treaties and Law of the Ministry of Foreign Affairs, but said more needed to be done.

“This year, the EU did raise some various issues,” said Vanida Phepsouvanh, president of the Paris-based Lao Movement for Human Rights.

“It’s about time that the EU should stop being too soft with Lao government that has signed but never implement the international conventions on human rights,” she told RFA’s Lao Service.

Before the next round of rights talks, the ninth between the EU and Laos, is held in the Lao capital Vientiane in 2019, “the EU should look into whether or not Laos has implemented any international conventions on human rights, and released any critics,” Sisoulath said.

“If not, the EU should make respect for rights a condition before dealing with Laos on other matters,” she added.

Speaking to RFA Sydney after Australia’s special summit with the Association of Southeast Asian Nations (ASEAN), Bounthone Chanthalavong-Wise, president of the Alliance for Democracy in Laos, said “Laos has been trying to avoid the international community on human rights issues.”

“The world always presses the Lao government to ratify this convention (Convention for Protection of All Persons from Enforced Disappearance). Laos should ratify it and respect human rights if it wants to develop the country,” she said.

Bounthone’s group joined a large gathering of activists protesting authoritarian regimes in the ASEAN grouping, including Laos, Cambodian and Vietnam.

“We the protesters are calling for change from the dictatorial regime to democracy and respect for human rights, especially in Laos,” she said.

“We are also urging the Lao government to release political prisoners, in particular those three workers who were sentenced up to 20 years in jail for criticizing the government on Facebook,” Bounthone told RFA.

Charged with criticizing the Lao government online while working abroad, the three were handed prison terms ranging from 12 to 20 years at a secret trial in April 2017, sentences described as harsh and unjust by rights groups worldwide.

Lao communists and Lao monkeys, your days are numbered and the end is near. You can start running for your lives but you won't escape from your sins. You can still laugh but not for long. Cuba and Vietnam are bound to change sooner or later. You, Laos, will fall like leaves to cover dogs excrements.Justice will step in and Lao people will remind what you did to them during your long governance.