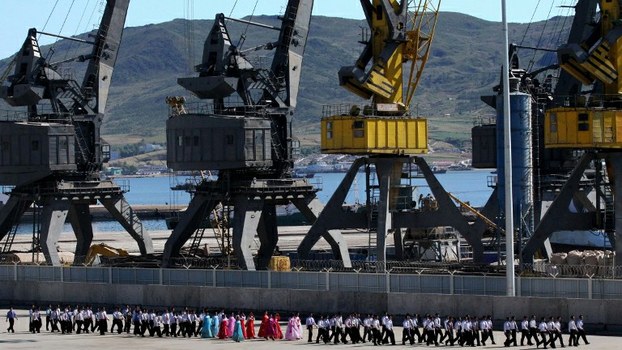 Participants attend the opening ceremony of a rail link to Russia from the North Korean port city of Rajin, in a file photo.

Workers from North Korea dispatched to Russia to earn foreign currency for the Kim Jong Un regime are being shortchanged as their employers flee the U.S. dollar in favor of the Chinese yuan to avoid sanctions targeting Pyongyang's illicit arms programs, according to sources.

North Korea regularly exports workers to Russia, China, and places farther afield such as the Middle East and Africa, but requires them to remit much of their earnings to Pyongyang, which is believed to use the cash to fund development of missiles and nuclear weapons.

At the beginning of the year, Russia-based employers largely ended the practice of paying North Koreans in U.S. dollars, which Pyongyang prefers because of the currency’s stability, but which are more likely to attract attention for skirting sanctions, sources said.

Instead, they said, the employers are paying North Korean handlers in rubles, which the handlers then change into yuan before paying workers and transferring the rest to Pyongyang. But the new system has led to frustration over how handlers determine what to give workers’ wages and what to give the state.

A North Korean source who once worked processing timber in Russia, but recently relocated to China, told RFA’s Korean Service that workers stopped receiving their wages in U.S. dollars earlier this year in favor of Chinese yuan, and that they were now earning significantly less money.

The worker said that as a technician, he was granted permission to relocate to an area of China near the border with North Korea, so that he could be closer to his hometown, but said his fellow workers had been required to stay in Russia.

“Most North Korean workers in Russia are getting paid in Chinese yuan this year … and they are not happy about it,” he said.

A North Korean executive of a trading firm who recently visited Russia told RFA that businesses operating in Russia are under “intense pressure” from the ruling North Korean Workers’ Party Central Commission to make deals for U.S. currency.

“However, Russian enterprises are standing firm on the decision not to compensate in U.S. dollars because of international sanctions on North Korea,” said the executive, who also asked to remain unnamed.

“Due to the stricter sanctions imposed by the United Nations against North Korea in March this year, Russian enterprises want North Korea to accept rubles as payment instead of U.S. dollars. So the Central Committee is now demanding crude oil or steel instead.”

The source confirmed that Russian enterprises had been paying monthly salaries of U.S. $350 per North Korean worker until this year—U.S. $50 of which was given by handlers to workers as wages and the rest wire transferred to Pyongyang.

The executive suggested that there should be “no difficulties” for North Korea in paying its workers in Russia their regular wages, despite the switch from U.S. dollars to yuan, noting that “more than a quarter of total dispatched workers in Russia are employed by Chinese business owners who possess land in Russia.”

Last month, a source in Vladivostok told RFA that his company’s internal policy specifies that it must transfer 70 percent of North Korean workers’ salaries to Pyongyang while the workers keep the rest, but he acknowledged that they had nearly nothing left to spend after they used their earnings to cover room and board.

“Even if they have some money left over, it is not enough to send to their families in North Korea or even to buy some drinks or cigarettes,” he said at the time.

Another source in southeast Russia’s city of Khabarovsk said North Korean authorities are keeping a close eye on citizens it sends to the region, establishing a reporting system for each work group and even monitoring workers during their dining hours.