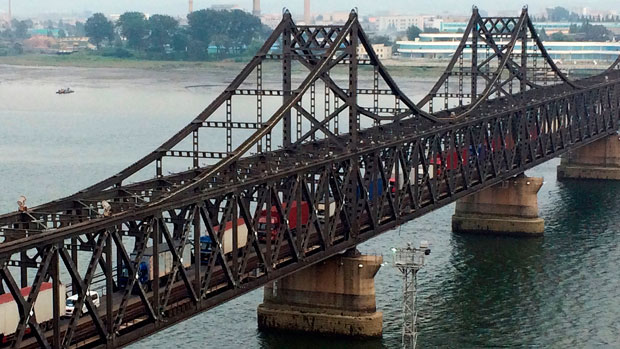 Trucks move along a bridge connecting North Korea with China near the port city of Dandong in a Sept. 4, 2017 photo.
AP

Talks between the two leaders at the end of March and the beginning of May appear now to have opened the door again to the illicit trade in goods banned under international sanctions punishing  Pyongyang for its nuclear weapons and missile programs, sources say.

“Smuggling is thriving in the Yalu River area, and this is keeping the border very busy,” a resident of North Pyongan province’s Ryongchon county told RFA’s Korean Service this week, speaking on condition of anonymity.

North Korean workers from trading companies and foreign currency generating firms now transport still-sanctioned products by ship on the river and hand them over to their Chinese partners on the outskirts of China’s Donggang and Dandong cities, the source said.

In the case of still-banned seafood, though, smugglers “openly cross the river in daylight, as live products have more value,” he said.

Also speaking to RFA, a North Korean trader living in North Pyongan said that North Korean authorities had already turned a blind eye to smuggling on the border, fearing damage to the North Korean economy if all trade with China were stopped.

“My own company suffered losses in the past year when Chinese border guards seized our vessel and all of our products, but we never stopped smuggling,” he said.

“To avoid inspection by Chinese border guards, [North Korean] trading firms had to rent Chinese vessels, and the rental fees were determined by the ships’ owners,” the source said, adding, “Now, with Chinese authorities easing their restrictions, the rental price is half of what it used to be.”

North Korean traders and smugglers are well aware there will be a summit meeting between North Korea and the U.S. in just a few days, he said.

“And if this meeting goes well, and results in an easing of economic sanctions, there will be even more smuggling between North Korea and China than before,” he said.

They are laughing at President Trump, the blockade is over.