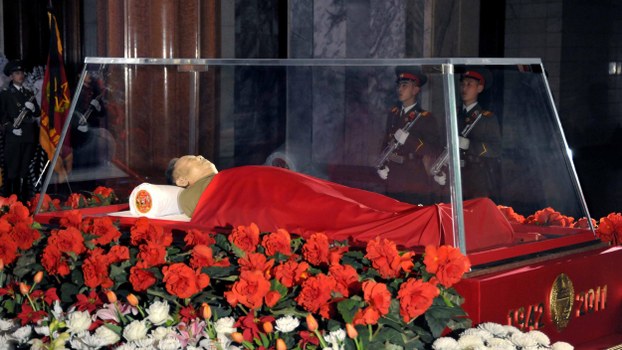 North Korean authorities are turning to implicitly mandatory donations from residents to finance the continued preservation of the embalmed bodies of its deceased former leaders, sources say.

The bodies of Kim Il Sung (1912-1994), the founder of North Korea, and his son Kim Jong Il (1941-2011), father of the current leader Kim Jong Un, are kept on display in the Kumsusan Palace of the Sun in Pyongyang, evoking similarities to Lenin’s Mausoleum in Moscow and Mao’s in Beijing.

But maintenance of these publicly viewable corpses is not cheap; in March this year the New York Post estimated that North Korea spends about $400,000 per year on the preservation of Kim Jong Un’s father and grandfather.

As Pyongyang is strapped for cash, it is now turning to North Korean residents to foot the bill of continuing to maintain the Palace of the Sun and its occupants.

“Today there was a ceremony to award certificates for the Kim Il Sung and Kim Jong Il Fund to factory representatives,” said a source from North Pyongan province in an interview with RFA’s Korean Service last Thursday.

“They gave the certificates to party members and workers who donated money to show their loyalty. It will be used to help with the upkeep of the Palace of the Sun.”

The source said that a speech given at the ceremony in North Pyongan encouraged people to learn from the loyalty of the donors and to help by participating in raising funds.

“The party forced all workers to make regular contributions to the Palace of the Sun, saying they would give commendations and preference to donors,” said the source.

“In the speech they said that regular loyalty donations will go into the Kim Il Sung and Kim Jong Il Fund, which will honor the great leaders who contributed their lives to the prosperity of their country and the happiness of our people,” said the source.

The source noted that not everyone in attendance at the ceremony was happy about the plan.

“Some people think it is ridiculous how the authorities are ignoring their livelihoods while trying to raise money to keep dead bodies from rotting,” said the source.

A source from Yanggang province said there was a similar ceremony there on Monday, and that the version of the fund in Yanggang was collecting money in situations that would normally be an opportunity for authorities to extract bribes.

“On July 8th, there was an event to give medals and citations to people who donated money to the Kumsusan Palace of the Sun. I was surprised because most of the honorees were smugglers who take goods to and from China,” the second source said.

“The smugglers are able to avoid punishment when they get caught by donating tens of thousands of Chinese Yuan to the Kim Il Sung and Kim Jong Il Fund, in lieu of bribes,” the second source said.

“Once they are released they get more opportunity to work in state-led smuggling operations [because of their donations,]” said the second source.

“Most people, even in remote areas in Yanggang province, know that a lot of money is spent [yearly] on preserving the bodies. Residents are angry that smugglers’ donations are used to preserve the bodies of their leaders and the smugglers, [who were breaking the law] receive accolades in return. [They are then free] to continue smuggling,” the second source said.

Pay up ! Daddy needs a new nose ! Regime too nosy anyway ? Nothing but trouble... Bankers ! Body by Fisher.