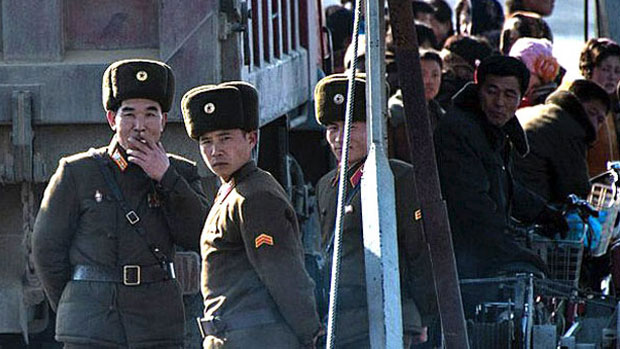 North Korean soldiers stand on a boat across the border with China in a file photo.
AFP

Military authorities in North Korea have disbanded a company of border guards following the suicide in June of one of its officers after he was passed over for membership in the country’s ruling party, RFA’s North Korean Service has learned.

The officer, a deputy platoon commander of the 3rd company, 2nd platoon of the 25th Brigade of Ryanggang Border Guards, shot himself with a rifle after confronting his company commander at his home, a source in Ryanggang province on North Korea’s border with China said.

“And when the platoon leader’s suicide caused widespread repercussions, his unit was inspected by the Central Party’s military department,” RFA’s source said, speaking on condition of anonymity.

Investigators then found evidence of bribery and corruption involving senior officers in the unit, he said.

About to be discharged from the border guards, the deputy platoon commander had entered his name several times on a list of soldiers applying for membership in the ruling Korean Workers Party, the source said.

But when he learned that other soldiers who had bribed the company commander for a recommendation had joined the party ahead of him, he went with a gun to the commander’s house in Songhu village in Hyesan and threatened to kill him, the source said.

“However, the company commander told the deputy commander that if he killed him, his family would all become political prisoners and three generations of his family line would be destroyed, and in the end the deputy platoon commander turned his gun on himself,” he said.

Investigators concluded that discipline in the company had collapsed because soldiers were deserting, defecting, and committing suicide owing to corruption among senior border guard officers and other “irregularities,” the source said.

“So they decided to remove senior officers from the 25th Brigade of the border guard unit, and they disbanded the entire 3rd company, which the deputy platoon commander had been assigned to,” he said.

Also speaking to RFA, a source in North Hamgyong familiar with military affairs said that the endorsement of military political leaders and one’s own commanding officer is essential for soldiers seeking membership in the country’s ruling party.

“And even if the company’s political leader provides a solid recommendation, a soldier will be described as ‘ideologically unhealthy’ if he doesn’t bribe the company’s commanding officer, and his application will not be accepted,” the source said.

“For this reason, soldiers about to be discharged from the military must pay bribes both to the political leadership and to their commanding officer, and in some cases military officials fight each other over the bribes,” he said.

Border-area residents are aware of this situation, and accuse the border guard units of being more interested in smuggling and bribery than in guarding the country’s borders, he said.