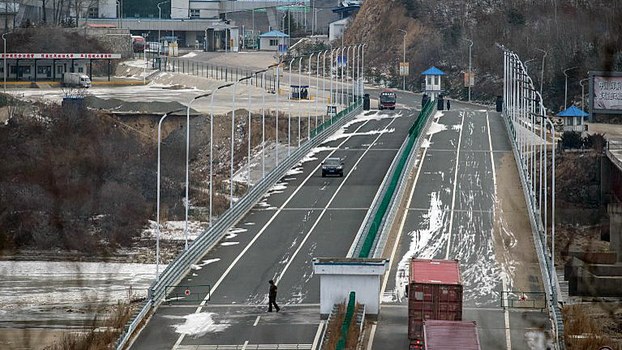 A truck entering the Rason Special Economic Zone makes its way across a bridge marking the border between North Korea (bottom) and China (top), Nov. 21, 2017.

North Koreans who live in border areas where mobile reception from China is available use smuggled cell phones to talk to family members living in China or South Korea. Authorities use radio locators to determine the callers' locations through the use of radio waves.

Residents are anxious about the new radio locators because they allow authorities to immediately detect and monitor call locations and conversations, sources said.

The Russian devices perform better than the German ones that authorities have been using and are especially "terrorizing" executives in government’s run companies who frequently make illegal calls to the outside world, they said.

“The State Security Department recently ordered installations of the newest version of additional radio locators along the border with China in Yanggang province,” said source from the province, adding that the agency has already set up 30 Russian radio locators there since early January.

“They are known to perform better than German radio locators that are already installed, so those who use illegal phone users are filled with terror about them,” said the source, who requested anonymity.

As of the beginning of the New Year, the State Security Department, North Korea's secret police agency, stepped up crackdowns on illegal phone users in border areas, he said.

“Until now, there was no problem detecting illegal calls using the German radio locators, so when residents made the calls, they had to change locations every one to five minutes to avoid detection by the German devices,” the source said.

But with the new devices, which are not thrown off track by physical movement, more executives from government and judicial authorities have been caught making calls, he said.

“One executive from the Yanggang’s Organization and Guidance Department (OGD) got caught, and it profoundly affected the society,” the source said.

The OGD is an oversight agency of the Central Committee of the Workers’ Party of Korea, the country’s ruling party. Its main responsibility is to implement the teachings and decisions of North Korean founder and former president Kim Il Sung, grandfather of current leader Kim Jong Un.

“As the New Year began, the [provincial] State Security Department installed dozens of the latest model of radio locators in the North Hamgyong area to block the inflow of outside information and the leakage of inside information to the outside,” said the source who declined to be named.

Though state security authorities informed residents about the installation of the new models and said that those caught using phones illegally would be sentenced to at least six months in a labor camp, the warning has not deterred everyone from placing calls to the outside, he said.

“Illegal phone calls in the border area continue, despite that those making them could face hard labor in a camp in this extremely cold weather,” he said.

The source cautioned that authorities will not be able to detect all illegal calls made with the Russian-made radio locators given the high number of people who use illegal mobile phones in border areas.

“Though the devices are the newest radio locators, it won’t be easy to uncover all illegal phone calls,” he said. “If North Korea blocks all the illegal calls that executives, traders, and smugglers make, its market will be paralyzed.”

And even if executives and traders are caught, they can always bribe authorities to look the other way, making use of the devices pointless, sources said.