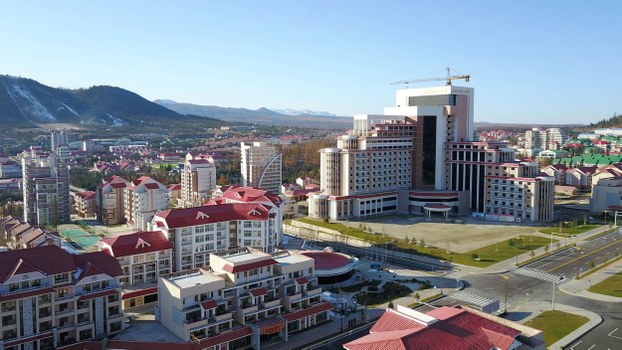 A robber believed to be a worker at North Korea’s Samjiyon county construction project last week allegedly murdered a family of three who lived near the worksite. Residents living near the major state-sponsored construction project say they live in fear because the October 28 murder is the latest of several violent incidents perpetrated by personnel working on the project.

“Construction at Samjiyon should end as soon as possible,” a resident of Ryanggang province told RFA’s Korean Service on Monday.

“It’s frightening and horrible. Soldiers at the construction site are turning into robbers,” the source said.

Most of the workers at Samjiyon are active military that have been assigned to work on the project, a total reconstruction of the entire town which, according to project maps released by the state-run Korea Central News Agency (KCNA), consists of more than 400 new buildings.

“Murder and burglary are taking place almost every day, and residents are terrified,” said the source.

The source described the incident, saying, “On October 28, a family in Hosan-ri, Samjiyon county, Ryanggang province was killed by a robber. [They] were sleeping at home and were all killed instantly [when struck] by an object the robber was wielding.”

“People who hear about this frightful incident are living with lots of anxiety,” the source added.

“The killer went into the house to steal food, most likely. It seems like he got into a fight with the husband, because there were sacks of corn strewn about the kitchen.

The source then described the state of the husband’s corpse, saying, “The husband was found dead covered in blood after being hit in the head with an ax. He was near the kitchen door, holding sacks of corn.”

“The judicial authorities think that the suspect entered the house to steal food, then swung his ax when he was discovered by the owner of the house. They believe he killed the man and the rest of the family too,” the source said, adding that locals were shocked by the crime, especially because the daughter, an 11-old-girl, was among the dead.

“Judicial authorities suspect the culprit was one of the [military personnel] that have been mobilized to work on Samjiyon. They have been questioning the workers for about a week, but they have yet to [find the killer], said the source.

A second source, also from Ryanggang, said incidents like the alleged murder are common these days.

“In May, a young couple living near the Samjiyon county constructions site was also killed by a robber who attacked them in their home,” the second source said.

“[Later] it was revealed that the [one] who killed the couple and covered them with blankets was a soldier who had been mobilized for construction,” said the second source.

The second source said that after Kim Jong Un ordered the project’s second phase to be completed next year, many more soldiers were mobilized to work on the project.

“They are experiencing extremely intense labor conditions, working day and night without getting enough food,” the second source said, adding, “They steal food or commit robberies without hesitation because they can’t stand the hunger.”

The second source said that residents fear for their safety due to the incident.

“Yet another murder, and this time an 11-year-old child was killed for no reason. Residents are anxious about who will be the next victim claimed by the Samjiyon county construction project,” said the second source.

“The people now resent the authorities, asking when the day will come when they can live and eat well without the fear of being robbed.”

KCNA reported on November 4 that construction on the Samjiyon county township was progressing at its “final stage.”

“A work is going on to finish off the construction of all objects, including thousands of houses, public buildings and nearly 200 facilities,” the agency said.