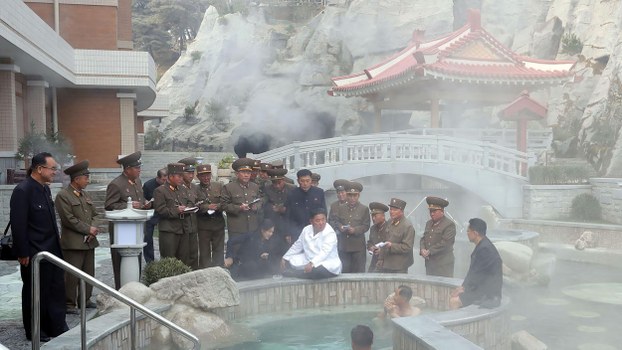 Residents in North Korea are fed up with being mobilized to prepare for field inspections by Supreme Leader Kim Jong Un, a tradition started by grandfather and carried on by his father, sources within the country say.

The field inspections are happening at more frequent intervals than before and residents say that it is a burden to be mobilized for an upcoming inspection because it hampers their ability to make a living. In addition, the people are tasked with donating supplies ahead of a planned inspection, so they are growing resentful.

“This month, the supreme leader inspected local areas in North Hamgyong province, but none of the residents were welcoming of the visit,” a resident of North Hamgyong told RFA on October 27.

“His local inspection did not improve people’s lives. Instead, it’s actually hindering their livelihoods, so antipathy is growing,” the source said.

The source said that when Kim Jong Un’s grandfather was in charge of the country, a local inspection would have been an occasion to celebrate.

“In the Kim Il Sung era, when a local inspection was scheduled, every resident in the entire area would come forward and prepare for his visit with joy,” said the source. Kim founded the Democratic People’s Republic of Korea with Russian help in 1948 and ruled until his death in 1994.

“This is because when Kim Il Sung was making a field inspection, they would be happy to receive benefits like an [uninterrupted] supply of electricity and access to food supplies that had been suspended,” the source added.

“But now with Kim Jong Un in power, the residents are worried about inspections in their area, because they will be mobilized and be ‘urged’ to support the scheduled inspection by donating supplies,” the source said.

“Residents’ lives are not improving in North Hamgyong province even though Kim Jong Un has visited several times this year,” the source added.

The source recalled many visits to North Hamgyong by Kim over the years, but said they had no effect on improving local standards of living.

“In May 2015, the supreme leader inspected [two fish farms] in Chongjin and told them to keep working toward the goal of providing fish to the people. It’s been five years since [that visit] but the people of this province have never tasted any fish from those fish farms,” the source said.

“The fish farms were from the beginning under the supervision of the Korean People’s Army Unit 810 and they are managed by soldiers,” the source said.

Another source, also from North Hamgyong, told RFA on October 28 that an upcoming visit from Kim Jong Un might result in a similar outcome – lots of effort invested in preparing for these inspections with no rewards.

“Local residents are complaining about Kim Jong Un’s upcoming visit to [a vegetable farm] and [a] power station scheduled for this month,” the second source told RFA.

“Although construction on the power plant and the farm’s greenhouse are complete, the residents still do not have electricity and there is no chance they will ever see any vegetables from that greenhouse,” the second source added.

The second source said the frequency of the inspections is taking its toll on the residents.

“This year, with an unusually large number of national and provincial projects being proposed, all residents in the province were subject to mobilization and had to donate supplies,” the second source said.

“Nevertheless, the supply of electricity for the people remains cut off, so the people live in darkness. There was also a food shortage, so the residents are complaining about it all,” said the second source.

“The people say that after Kim Jong Un came to power, he has been constantly inspecting everything, but living conditions are just as they were five years ago,” the second source said.

“They say that since his visits make their lives difficult because of mobilization and donations, it would be nice if he would just stop going on these inspection tours.”