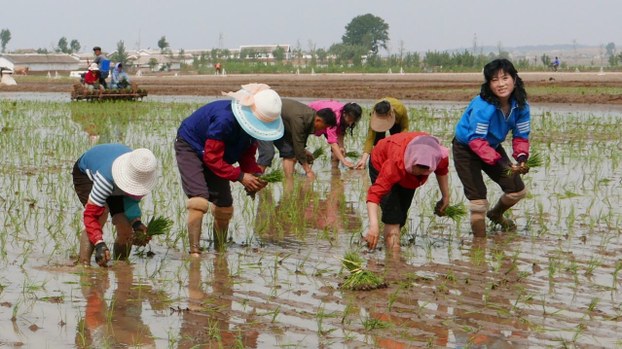 In this May 17, 2019, photo, North Korean farmers plant rice seedlings in a field at the Sambong Cooperative Farm, South Pyongan Province, North Korea.

North Korea is moving forward with its annual “farming battle” labor-mobilization campaign despite the coronavirus crisis, raising health concerns as it is not providing facemasks to citizens conscripted to plant crops, sources in the country told RFA.

The free-labor drive comes as North Korea, which uses military phrases to motivate workers in agriculture and industry, is facing grain shortfalls made worse by COVID-19 border closures with China and longer-term deforestation threats as it cuts down forests to expand farmland, experts said.

“Rice planting battles have begun on farms all over the province,” a resident of South Pyongan province who requested anonymity to speak freely told RFA’s Korean Service.

“In Unsan county, housewives are being mobilized to support farming. Despite the continued spread of the coronavirus, authorities are pushing head with the mobilization campaign without quarantine equipment or assistance,” the source said.

North Korea still officially claims that there is not a single confirmed case of the coronavirus within its borders, but RFA reported last month that the government advised people in mandatory lectures that the virus was spreading in three parts of the country, including the capital Pyongyang.

“The authorities are ordering residents to take preventative measures for themselves, without providing facemasks, then sending them off to toil in farming projects. From dawn the people must work on seedbed preparation and planting at designated farms,” the source said.

“Residents complain that they can’t go home until they have satisfied their planting quotas. [Authorities] don’t care about their own quarantine measures, they just want to exploit unpaid labor,” the source added.

Another source, a resident of North Pyongan province who requested anonymity for legal reasons, told RFA Monday the coronavirus had caused labor shortages in the region.

“There is not enough support,” the second source said.

“Due to the coronavirus crisis, school is not in session until June, so the students cannot be mobilized like in previous years,” the second source said.

But even without the free labor provided by students, the planting must occur on schedule.

“That’s why they are mobilizing housewives to support farming in the rural areas. They say that if rice planting is not completed this spring, grain production will fall and we won’t be able to confront U.S. economic sanctions,” the second source said.

The sanctions imposed by the United States and the United Nations are aimed at depriving Pyongyang of resources that could be funneled into its nuclear and missile programs.

“Residents who are already unable to make ends meet due to the coronavirus crisis are suffering even more because they have to [provide labor] to support the rural [farms],” the second source said.

The crisis has taken its toll on the livelihood of the average citizen.

With no emergency safety net in place, the sudden interruption in income has created a desperate situation for most people.

“The authorities have not said a word about the people’s livelihood, they’re just forcing us to plant rice,” the second source said.

“They just tell us to take our own precautions and wear masks to avoid being infected. So a lot of residents are complaining about it, saying the authorities should give them masks instead of saying [empty] words.”

North Korea will be short about 860,000 tons of grain this year, according to estimates from the South Korean Ministry of Unification.  The North produced 4.64 million tons of grain last year, well short of its annual demand of about 5.5 million tons.

“Last year, [North Korea] tried to solve their agricultural and food problems in anticipation of prolonged sanctions, but the coronavirus happened as an unexpected variable at the beginning of this year,” Kim Kwan Ho of the Rural Research Institute of the Korea Rural Community Corporation told RFA.

“Farming materials like fertilizer aren’t being imported or smuggled in because the border is closed,” said Kim.

He said that if sanctions against Pyongyang and the coronavirus crisis overlap with any common natural disasters that could potentially happen in North Korea, like drought, flood or typhoon, the food shortage there would likely be worse.

Kim warned that aid from other countries would not be enough to bail North Korea out of its food issues.

North Korea has responded to poor agricultural performance by chopping down its forests to create farmland at an increasing rate, according to a satellite image study of the Korean peninsula.

The loss of forest to farmland accelerated to ensure food security, despite deforestation policies in place, the study’s findings said.

“Deforestation in North Korea thus requires more attention but would not be easy to mitigate due to economic constraints,” it said.

The accelerating trend of forest decline in North Korea contrasts with the rest of the world, according to a recent report from the U.N. Food and Agriculture Organization (FAO). The country has experienced ruinous floods that were blamed on erosion caused by planting on lands not appropriate for agriculture.