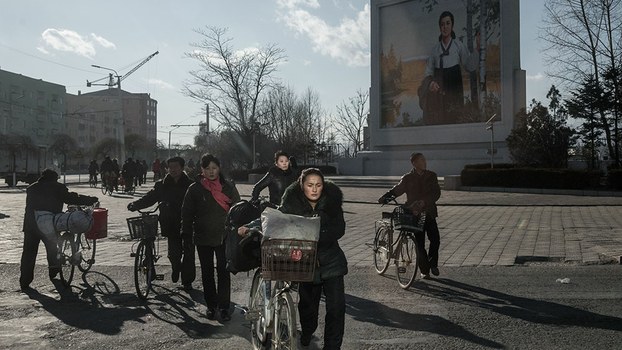 Residents of two cities in North Korea’s North Hamgyong province are grumbling over a government directive requiring them to provide funds and supplies to aid the construction of the latest historic site to memorialize the country’s founder Kim Il Sung, according to local sources.

But rather than provide them with a source of pride, the designation has left residents furious over the latest project they will be expected to shell out for, even as families already face difficulties making ends meet, they said.

According to the source, the site at Mt. Wangjae has been used as an outdoor museum honoring Kim Il Sung’s revolutionary history since 1970, and includes statues of Kim and anti-Japanese partisans, a monument, an exhibition center, and a guesthouse for military visitors.

Once the site was confirmed as a Revolutionary Historic Place construction project, however, “residents must cover all necessary funds and supplies” for additional construction and maintenance, he said.

“The offering that Chongjin city’s residents need to make is a minimum 10,000 won (U.S. $1.25) per household ... as well as an arbitrary additional amount of money or supplies,” the source said, referring to North Hamgyong’s capital on the country’s northeastern coast.

“The residents are complaining since they were informed about the … construction. They are resentful of the fact that they already have dedicated so much by contributing money to the state’s large-scale construction projects upgrading Samjiyon county [in Yanggang province], the capital Pyongyang, and the [tourist beach] project in [Kangwon province’s] Wonsan city,” he added.

A second source from North Hamgyong told RFA that residents of Hoeryong—a city in North Hamgyong on the Tumen river across the border from China’s Jilin province—also received a directive to provide assistance for the construction of Mt. Wangjae Revolutionary Historic Place.

“They are being forced to provide food for construction workers at the site,” he said, adding that each household is expected to deliver 10 kilograms (22 pounds) of grain in support of the project.

“They are strongly critical of the fact that they must make additional offerings, as they already gave out so much food for the Samjiyon and Wonsan construction projects.”

According to the source, authorities collect funds and supplies from residents “every single day, twelve months a year,” for varying reasons.

“The residents believe that the Central Committee’s directives for construction projects are just another trick to collect money and food,” he said.

While residents had regularly accepted Central Committee directives related to Revolutionary Historic Places in the past, the sources told RFA that open criticism of the practice is a relatively new phenomenon in North Hamgyong.

Last month, sources told RFA that a critical slush fund controlled by North Korea’s leader Kim Jong Un is nearly depleted following a series of nuclear weapon and missile tests, and that he no longer has enough money to govern the country.

In addition to expenditures on weapons tests, the sources said that Kim has also spent lavishly from the fund on showpiece projects such as the Ryomyong Street neighborhood in the capital Pyongyang and the Masikryong Ski Resort in eastern North Korea’s Kangwon province, as well as on his “on-the-spot guidance tours” of different industries that are used as propaganda by state media.

Earlier, sources had indicated that the Kim regime lacked funding for basic schemes such as building nursing homes for senior citizens—ordering North Korea’s provinces to build the facilities as part of a New Year’s push to complete showcase projects, but passing the cost of labor and construction on to local citizens who are already strapped for cash.

While funding for construction, including materials and labor, is being demanded from area residents, the sources said North Korean citizens are becoming increasingly frustrated with projects that will end up being hailed as among Kim’s achievements.