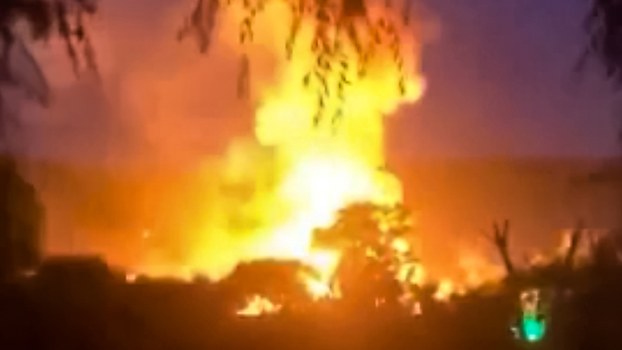 A screenshot from a video shows fire engulfing a building in Hyesan city, in North Korea's Ryanggang province, Aug. 3, 2020.

A video showing a series of explosions in North Korea’s Hyesan city earlier this week has emerged, appearing to confirm South Korean media reports and defector accounts of blasts that claimed more than a dozen lives in the city on the border with China.

A China-based activist that assists refugees fleeing North Korea recently provided RFA’s Korean Service with what he claimed is footage of the blasts filmed on Monday from across the Yalu River in China’s Changbai city. The 14-second video shows black smoke rising into the sky in Hyesan as several explosions are heard in the background.

“I heard that a fire started at a place where gasoline was stored, moved to a liquefied petroleum gas (LPG) container, and caused a series of explosions,” said the source, speaking on condition of anonymity because of the nature of his work.

“I know the North Korean authorities were trying to deal with the accident, but I don’t know what they managed to do.”

The activist’s account is similar to those in reports by the Seoul-based Daily NK and other South Korean news outlets, which said the incident is believed to have occurred after gasoline stored in a home in the city’s Tapsong neighborhood caught fire at around 6:10 p.m. on Monday, causing a nearby LPG cylinder to explode and setting off a chain of blasts of similar cylinders attached to other homes. Hyesan is a city of 192,000 people.

The Associated Press published a similar video on Wednesday it said was obtained from a Chinese travel agent who had previously visited Hyesan. The travel agent said he shot it from a park in Changbai and that the blast had occurred near Hyesan’s orphanage and tourism office.

The Daily NK said Wednesday that at least 15 were killed in the explosions and that the death toll could continue to climb, while other South Korean media have suggested “dozens” had been killed or injured. RFA’s Korean Service was unable to independently confirm the numbers.

As with most deadly incidents inside North Korea, the country’s state media has not reported on the blasts. Neither have news outlets in China.

Seo Jae-Pyoung, the secretary general of the Association of the North Korean Defectors, told RFA that residents of Changbai said they “heard that a big explosion killed several North Koreans” but “could not confirm whether LPG was the cause of the explosion.”

South Korea’s Unification Ministry spokesman Yeo Sang-gi told reporters during a press briefing in Seoul on Wednesday that “we only know it was an accident involving gasoline and LPG,” while the ministry had seen “reports of several casualties.”

“A fact-checking process should take priority” before any conclusions are made, he said.

Yeo said the Unification Ministry will “take the time to more closely monitor the situation.”

Last month, a fire at a train station in the North Korean city of Sinuiju destroyed a freight train carrying hundreds of tons of cooking oil from China, as well as a warehouse full of cargo, witnesses who watched the blaze from across the Yalu in China’s Dandong city told RFA at the time.

While the cause of the fire was unclear, sources said firefighters had failed to put it out because extinguishers at the train station were empty.