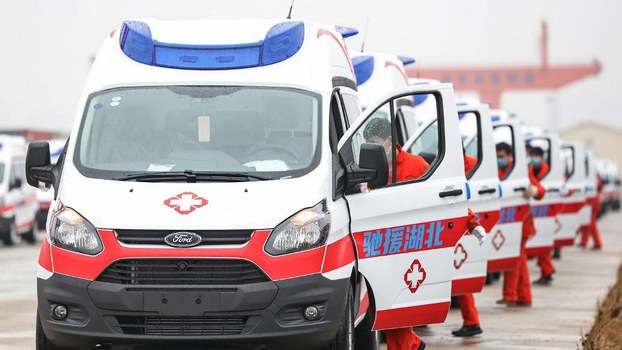 Negative pressure protection and monitoring ambulances preparing to leave for the central Chinese city of Wuhan, epicenter of the coronavirus epidemic, from Nanchang in Jiangxi province, Feb. 12, 2020.

China said it had seen a rise in coronavirus cases of more than 15,000 after officials changed reporting criteria in the worst-hit province of Hubei, of which Wuhan is the capital.The country now has 59,822 confirmed cases, compared with a global total of 60,349. Of the 1,370 deaths attributed to the novel coronavirus (COVID-19), 1,310 were in Hubei.But Su Ih-jen, infectious diseases expert at Taiwan's National Institutes of Health, said the real number of infections in China is likely at least 500,000, given that the majority of coronavirus patients in and around Wuhan haven't been able to access medical care to achieve a diagnosis.Extrapolating the number of infections aboard a sealed environment like the Diamond Princess cruise ship currently quarantined in Japan, Su said Wuhan, also a quarantined environment, should be seeing an infection rate of around five percent, which would add up to 500,000 people.China's National Health Commission spokesman Mi Feng said Hubei had adopted a revised diagnosis and treatment plan aimed at accelerating the identification and treatment of patients.That adds a "clinical diagnosis case" classification to identify suspected cases who appear to have pneumonia so that patients can be accepted as soon as possible and treated as confirmed cases, Mi said, adding that should “reduce severe illness and mortality.”Citizen journalist Chen Qiushi, who is currently incommunicado, believed detained, reported that he had followed one Wuhan patient whose X-rays showed ground glass opacification in both lungs, a key indicator of pneumonia through his medical appointments on Jan. 29. The patient was eventually refused a test for COVID-19 due to the shortage of test kits, and turned away without medical care.Amid simmering public anger over the suppression of frontline medics who tried to warn people about the newly emerging outbreak in December, the ruling Chinese Communist Party has reshuffle a number of local leaders, sending former Shanghai mayor Ying Yong to replace Jiang Chaoliang as provincial party secretary.Meanwhile, Wang Zhonglin was announced as replacement for Wuhan party secretary Ma Guoqiang.Doctor-led diagnoses

A medical worker surnamed He said the changes were fairly meaningless for those at the epidemic's front line, however."So they've reshuffled a few leaders, and what they will usually do is to dig up some dirt on the previous leaders," she said.She said the changes in rules governing who gets confirmed as having COVID-2019 were more significant, however."They've also changed the criteria for diagnosis. Before, you needed a test kit diagnosis, so a large number of people died without ever becoming a confirmed case.""A lot of the time, the whole thing hinged on the test kits, but now they are doing doctor-led diagnoses which means they can diagnose pneumonia based on the whole clinical picture including CT scans," He said."So a lot of the cases that were previously only listed as suspected cases have now become confirmed cases," she said.World Health Organization (WHO) spokesman Tarik Jasarevic said the agency is seeking more clarity from China on the changes to its case definition and reporting protocols."It is our current understanding that the new case definition widens the net, and includes not only lab-confirmed cases but also clinically diagnosed cases based on symptoms and exposure," Jasarevic said in an email to The Associated Press."The jump in cases today reflects the broader definition," he said, echoing He's analysis.Meanwhile, authorities in the southern Chinese province of Guangdong have ordered the evacuation of luxury apartment buildings in Poly Yue Gardens after more than 300 cases were diagnosed in the provincial capital Guangzhou.Fecal-oral transmission?

A Guangzhou public hospital doctor surnamed Zhang said there were concerns that some cases had been transmitted within the building via sewage pipes, but that tests are still under way."Fecal-oral transmission has not been confirmed yet," Zhang said. "There was talk of traces of viral DNA in people's feces, but that doesn't add up to the virus being present.""However, I can't rule out transmission through the elevator shaft," he said. "That is a possibility, although they had been disinfecting the elevator three times a day.""Exactly how many people are now infected within this residential community is another matter ... It requires careful analysis to establish transmission routes," he said.Guangzhou resident Liang Yiming said most of the city remains under lockdown, with people only leaving their homes to buy essential supplies."Each residential district has designated a few businesses to supply food and drink to local residents, and none of the restaurants are allowed to operate," Liang told RFA."But there are still a few people operating in a grey area, by serving takeaway food only," she said. "Basically, if anyone comes to check, there won't be any customers in the restaurant, so it doesn't count."Zhang said his hospital requires staff to maintain a distance of more than one meter from each other in the canteen."I think it's unlikely that such strict guidelines are being followed in people's homes, right?" he said. "Personally, I think the epidemic prevention measures are a little over the top.""The most effective measure would be for everyone to be isolated in their own isolation room, but this would come at too great a cost to society," he said.Reported by Gao Feng, Zheng Chongsheng and Qiao Long for RFA's Mandarin Service, and by Wong Siu-san and Sing Man for the Cantonese Service. Translated and edited by Luisetta Mudie.