'China's Gandhi' Gets Out of Jail, Fellow Rights Lawyer Watched by Police 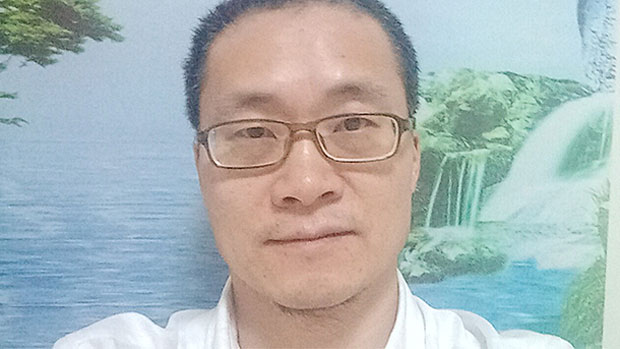 Authorities in the southern Chinese province of Guangdong on Tuesday released a human rights lawyer known as "China's Gandhi" at the end of his sentence for subversion.

Tang Jingling served a five-year jail term after being found guilty of "incitement to subvert state power" by the Guangzhou Intermediate People's Court in the provincial capital.

"Overall I'm not doing too badly," Tang told RFA shortly after his release on Monday.

Tang's first act on his release was to travel to pay his respects at his mother's grave in Jingzhou city, in the central province of Hubei. But he said he would need to go back to Guangzhou soon.

"During my post-release medical, they found some kidney stones that are growing pretty fast, so I plan to go back to Guangzhou pretty soon to sort out my health problems," Tang said.

"I would like to thank everyone who helped and supported me. You are the reason we were able to get through this difficult time," he said.

Tang said he still plans to keep fighting for a free and democratic China, but after he has restored himself to better health.

"In the two days since I got out of prison, it seems to me that things are a bit worse than before, the atmosphere," Tang said. "Things haven't progressed in a more liberal direction; they seem to be more restricted, which I am quite worried about."

Tang, who was stripped of his license to practice law by the authorities, was detained after he tried to launch a nonviolent civil disobedience movement along with fellow activists, earning him the nickname "China's Gandhi."

He received a longer sentence than the others because of his position as the leader of the movement.

Tang had played a prominent role in press freedom protests centered on the Southern Weekend newspaper in early 2013, as well as taken part in commemorative activities for the 25th anniversary of the Tiananmen Massacre the following year.

The police charge sheet for Tang mentioned his involvement in "civil disobedience movements," a commemoration of the death of Mao-era dissident Lin Zhao, and a June 4 meditation event.

Also mentioned was his part in a campaign to end China's "hukou" household registration system linking access to education and other public services to a person's town of birth.

Tang's lawyer said he was tortured while initially detained at Baiyun District Detention Center in Guangzhou, while rights groups said the case was marked by multiple procedural violations.

Tang's wife Wang Yanfang told RFA that the prosecution had used his recommendation of the work of U.S. scholar Gene Sharp on nonviolent civil disobedience as part of its case.

She said fellow activists Wang Qingying and Yuan Xinting, who were handed sentences of two-and-a-half and three-and-a-half years respectively, had been placed under police surveillance ahead of Tang's release.

"Since he got out, the others have been placed under surveillance," Wang said.

"I hope Tang Jingling will be free to go online and to speak for freedom, as well as enjoy true freedom of movement, not just within China, but overseas."

Meanwhile, the wife of prominent Chinese rights lawyer Jiang Tianyong said he has yet to regain his full freedom following his release from prison earlier this year.

"The situation right now is that there are more than 20 state security police watching him 24 hours a day," U.S.-based Jin Bianling told RFA. "If he goes out, he is closely followed by several vehicles."

"I think they're doing this to step up the psychological pressure on him," she said. "I am most concerned about his health right now, because it's hard for him to get to the hospital for treatment under these circumstances."

Authorities in the central province of Henan allowed Jiang, 48, to return to his parents' home three days after his release at the end of a two-year jail term for "incitement to subvert state power."

But Jin has said she is concerned for his health after he was tortured by cellmates in a bid to get him to "confess" to the charges against him, and has called for him to be allowed to seek medical treatment in the U.S.

Jiang has blamed his poor health on torture and ill-treatment while in prison, which included being forced to sit on cold, hard concrete for long periods of time, she said.

Jiang was only allowed to return to his parental home in Henan's Xinxiang city after he went on hunger strike in protest at being taken away immediately by state security police following his Feb. 28 release.

London-based rights group Amnesty International reported last July that Jiang had seen a deterioration in his physical and mental health amid concerns that he was at risk of torture or other ill-treatment in Xinxiang Prison.

Jiang, who pleaded guilty to "incitement to subvert state power" at the Intermediate People's Court in the provincial capital Changsha on Aug. 22, 2017, was sentenced in November 2017.

His sentence was based on his setting up of a campaign group in support of rights lawyers detained in a nationwide police operation targeting the profession since July 2015, the court said at the time.

He was accused of "speculating" on politically sensitive cases and "inciting others to illegally gather in public places" and "stirring up" public opinion, the indictment said.

Reported by Xi Wang for RFA's Mandarin Service, and by Lau Siu-fung for the Cantonese Service. Translated and edited by Luisetta Mudie.