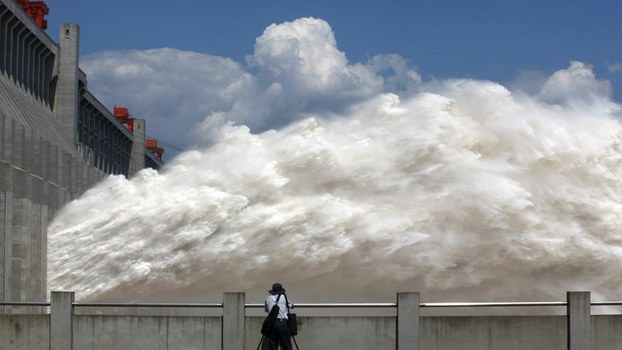 Floodwater is released from the Three Gorges Dam, a gigantic hydropower project on the Yangtze River in central China's Hubei province, in file photo.

Official Chinese media moved on Sunday to dismiss safety concerns around its massive Three Gorges hydroelectric dam on the Yangtze River, after photos of what appeared to be signs of warping circulated on social media.

Social media users in China have been posting satellite imagery showing what appears to be undulations in the line of the main dam, amid growing public concern that its structural integrity is compromised.

A post highlighted and translated by the Hong Kong-based China Media Project  (CMP) compares satellite imagery of the dam from 2007 to 2018, saying the photos suggest “serious warping” of the dam structure.

Another post cited by CMP reads“Terrifying! Expert team from the Three Gorges Dam has confirmed that the dam has changed shape!”

In response, the Global Times newspaper, the sister paper of ruling Chinese Communist Party mouthpiece the People’s Daily, published a high-resolution satellite image from the Gaofen-6 satellite which it said disproved the claims.

“Monitoring data gathered since it began operations shows that all buildings are in normal working condition,” the China Three Gorges Corp (CTG) said in a statement released on its official account on the social media platform WeChat.

It said “horizontal displacement” in the dam had been less than three centimeters (about one inch), ad was affected by water levels and temperatures.

“The Three Gorges Dam is an absolute safe project, which could survive up to 1,000 years. Apart from Earth gravity, no other external power, either flood or earthquake, could cause the deformation of the dam," the Global Times quoted engineer Guo Xun of the China Earthquake Administration in Beijing as saying.

“Rumors abound over the Three Gorges Dam, manipulated by domestic and overseas forces, who intentionally tarnish the project and the Chinese government for their own purposes,” the paper said, citing unnamed “Chinese experts.”

Some 700 million people live downstream from the dam, and not everyone has been convinced by official assurances that all is well, and that the apparently wavy dam is operating within its normal elasticity range.

An engineer who has worked on the Three Gorges dam who gave only his surname Liu said he hadn’t been able to verify either claim, as he is currently working on a different project.

But he said he couldn’t say whether the Google satellite imagery definitely indicated a problem with the dam.

“There is a warping phenomenon that is caused by lateral water pressure, and but it should be very small, measurable in centimeters or millimeters,” he said. “In the Google satellite images, it would appear that the deformation is pretty big, and it may indicate a problem with the image.”

“But if it were accurate, and there was really such a large change in the structure, then you would already have seen leakage or collapse of the dam, or a catastrophic release of water,” Liu said.

He said there have always been quality issues with the Three Gorges dam, including cracks and substandard concrete that was discovered during construction, with notification made to China’s cabinet, the State Council, at the time.

“These things have an impact on quality, but don’t necessarily mean that there will be serious problems like dam breach,” Liu said.

He said the main issue is a lack of public trust in the government.

Repeated calls to the Yangtze River committee of the ministry of water resources in Beijing rang unanswered on Sunday.

“The government said that it was not so serious, but official statements always lie and can’t be relied upon,” Chen said. “Most ordinary people have no idea … but if there is a problem with the dam, that would present a huge danger.”

The CMP said the concerns over the dam are being framed as a point of national pride, rather than an issue of technical safety.

“Naturally, given the fact that the Three Gorges has for some stood as a point of pride and a symbol of China’s technological and engineering prowess, accusations are also surfacing that the whole focus on the Three Gorges Project over the past five days has been a conspiracy cooked up by ‘anti-China forces’,” it said in an analysis of recent media reporting on the topic.

It said the symbolic importance of the project for Chinese nationalism meant that public discussion of the project has been heavily censored by the government for years.

“At no point since the project’s construction got underway in the 1980s has discussion of the possible implications in terms of environmental or human cost been truly possible,” it said.

Those are warped aerial images which we’ve seen a million times before. The “wavy” problem is in the photograph, not in the dam’s concrete itself! Stop spreading disinformation, you obvious PROPAGANDA outlet.