'The Wandering Earth' Seen as Propaganda Coup For China's Ideologists 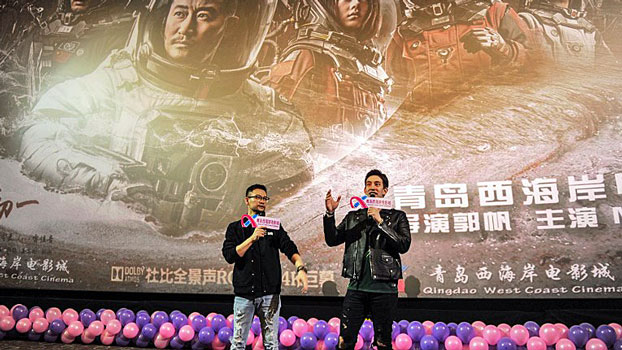 The ruling Chinese Communist Party's propaganda experts are pinning their hopes on the country latest homegrown movie to sow the seeds of their president's ideology overseas, industry analysts said.

The sci-fi blockbuster "The Wandering Earth," which opened in China on Feb. 5, has been singled out for praise by the country's foreign ministry, as well as the ruling party's Central Commission for Discipline Inspection, which rarely comments on cinematic output.

Based on a story by Liu Cixin, the movie tells the story of Chinese taikonauts trying to save the Earth from an unstable sun — a theme that echoes the plot of Liu's "Three-Body Problem" trilogy.

Set in a far-distant future, where the dying sun threatens to extinguish all life on Earth, the film shows an attempt to relocate the planet to orbit a safer star.

"I know the hottest movie now is 'The Wandering Earth.' I don’t know if you have watched or not. I’d recommend it," foreign ministry spokeswoman Hua Chunying told journalists without being asked about the film.

But as the movie, directed by Frant Gwo (Guo Fan) and co-produced by China Film Group Corporation and hit-maker studio Beijing Culture, opened throughout the United States last week, analysts told RFA that China is hoping for more than just box-office success.

Official Chinese media also seem to see it as a further extension of the country's 'soft power' and ideological influence overseas.

Online commentator Wen Zhao agreed that the production values alone are an excellent advertisement for China.

"This has been the most successful Chinese movie of recent years that seeks to emulate overseas movies," Wen said. "It has the doomsday theme, along with highly successful special effects."

"It has family relationships, a clear plot line, and an excellent arc to the climax of the story," he said.

'Chimes in with Xi Jinping Thought'

But columnist Wu Zuolai said the movie is also being seen in political circles as the embodiment of President Xi Jinping's personal brand of ideology, which seeks a leadership role for China on the world stage, as well as the export of its technological-authoritarian model of governance.

"Anything that chimes in with Xi Jinping's so-called thought, for example that shows China coming up with a plan to save the world, is going to get the propaganda department or even the Central Commission for Discipline Inspection behind it, to try to boost box-office revenue," Wu said.

"Because they need the box-office income [to be high] too," he said

"This film emphasizes collective action by the whole human race, and officials can use it to promote their world view, because Xi Jinping said something similar last year," Luo said.

"Of course, the government is going to get involved when you have such a high-grossing film," he said.

An industry insider who gave only his surname Liu said the domestic market is strongly weighted to favor film-makers who sing to "the main theme tune."

"The current movie market is very weird," Liu said. "There are maybe 1,000 movies or so in production every year, but only a few dozen people who can really make money."

"Box office receipts for movies ... like 'The Wandering Earth' are very high, but really good movies are a bit niche in this country," he said.

While there are no direct references to the Chinese Communist Party in the movie, the film's success is entirely down to its willingness to pick up and run with themes close to the leadership's heart, he said.

"There are several types of producer in China, and some of them are dedicated to subjects related to [government propaganda], and the government will support them," Liu said.

"You have to think about which way the political winds are blowing when you look at domestic productions."

Man this website is so bad ,do you even read what you guys are posting online? So biased so much hate. Funny that you guys have to add a 'Free' under your logo to cover-up your biased opinions, people aren't stupid you know.

- The bad guys... oh wait, there are no bad guys to shoot... the problems are the Sun and Jupiter (and gunning them down is pretty ineffectual)
- The senior astronaut is Russian
- The plan was first thought of by Israelis
- The world government speaks French
- The interfaces are all in English
- Every country's rescue squads other than the Chinese accomplished their missions - these missions were all world government run
- Everybody needs to choose to work together (they are not coerced into it)
- The final acts of sacrifice are all done for family and humanity, and not for glory, and are actually against the wishes of the government (which is actually said, clearly, in the movie)

If this is Chinese government propaganda, sign me up for more!

Anybody who wants to know where the real masters of propaganda are just needs to watch this movie and then read this review.

Come on! What the movie shows is not Xi's value, it's the common value shared by every earthlings. The movie tells not even a bit of the communist propaganda, in fact, there is only one government, the United Earth Government, and the earth is saved by a joint collaboration of all races, not just the Chinese. The Wandering Earth is of no difference from any other Hollywood Scifi blockbusters, save all the political shits please!