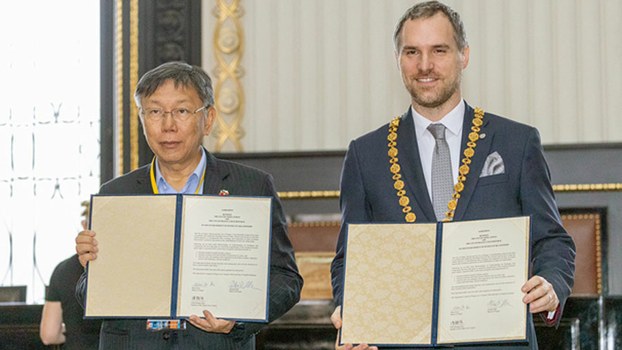 The mayor of the Czech capital has signed a sister-city agreement with Taiwan's capital Taipei, rejecting China as "an unreliable partner" in the wake of President Tsai Ing-wen's election victory at the weekend.Prague mayor Zdeněk Hřib, of the anti-establishment Pirate Party, announced the move after Taiwan president Tsai Ing-wen won a second term in office on a platform of standing up to pressure from China, which has included the threat of annexing the democratic island by force to achieve "unification."Hřib signed the sister-city arrangement with his Taipei counterpart in Prague's Old Town Hall on Monday.The cities have pledged cooperation in business and economic development, science and technology, tourism, education, healthcare, and culture.Prague Zoo will receive pangolins from Taipei Zoo, while Prague will send students to Taipei to study Chinese and also learn from Taiwan's experience of digitizing healthcare and operating its Mass Rapid Transit (MRT) system.In a newspaper commentary published Sunday, Hřib said China was a "risky and unreliable partner."He wrote in Germany's Welt am Sonntag that he couldn't accept an agreement that forced city officials to "speak out against the independence of Tibet and Taiwan.""As mayor I am working to fulfill my campaign promise to return to a course of respect for democracy and human rights," Hřib wrote, and accused the Czech government of neglecting the legacy of the peaceful 1989 Velvet Revolution that ended four decades of communist rule in the former Czechoslovakia.Just a day later, the city of Shanghai announced it had ended its twinning arrangement with Taipei.Long-running exchange

Prague has "repeatedly made erroneous actions on Taiwan and other major issues involving China's core interests," the Shanghai municipal government said in a statement on Tuesday. "We urge Prague's municipal authorities to recognize their mistakes promptly."Taipei mayor Ko Wen-je said the twinning agreement was "just the start" of a long-running exchange."The city of Prague has the right to make friends with any city in the world," Ko told journalists. "It doesn't need permission from China.""Prague shouldn't be prevented from making twinning arrangements with any sister-city."Ko said Monday on his Facebook page that the two cities shared "democratic values, respect for basic human rights and cultural freedoms."Taiwan's Mainland Affairs Council (MAC), the executive department charged with managing the relationship with China, said the island is governed by the 1911 Republic of China, which is a sovereign state, and that it is normal for its cities to enter into twinning arrangements.Prague also suspended sister-city relations with Beijing in 2019, prompting Beijing to cancel concerts by four Czech musical groups.Hřib wrote of the decision that the cancellations were made "for purely political reasons.""As mayor of our capital, I tried to keep my campaign promise, namely, that I would return to the path of respect for democracy and human rights, the ideals of our Velvet Revolution, which are ignored by the current leadership of our republic," he said in the article.Unification vs sovereignty

In Saturday's general election, Taiwan's President Tsai swept to a landslide victory, seeing off China's preferred candidate Han Kuo-yu and garnering more than 57 percent of the total vote after she vowed to defend the island's way of life against threats, infiltration and saber rattling by China.China said on Monday that the democratic island's "separatists" would "leave a 10,000-year stink."Tsai's election victory came after she stood up to increasingly aggressive rhetoric from Chinese President Xi Jinping, who called last year for "unification," refusing to rule out the use of force to annex Taiwan.Tsai responded by saying that Taiwan's 23 million people -- who are ruled under the Kuomintang (KMT)-founded Republic of China regime that fled to the island in 1949 after losing the civil war -- have no wish to give up their sovereignty.Taiwan was part of Japan for 50 years before being handed back to the 1911 regime, and has never been ruled by the Chinese Communist Party, nor has it formed part of the People's Republic of China.Tsai also argued that the erosion of democratic progress and civil liberties in Hong Kong under China's "one country, two systems" means that Taiwan should never take Beijing seriously when it talks about "unification."The election followed half a year of protests in Hong Kong, which underscored to Taiwan's voters the erosion of democratic progress and civil liberties under the "one country, two systems" model that China wants to use to rule Taiwan.Tsai told journalists at a news conference after her victory was announced on Saturday that she expects pressure from China to continue, and even worsen, but said her government utterly rejects the notion of Chinese rule under the same formula as Hong Kong.Beijing has been stepping up its campaign to isolate Taiwan diplomatically since Tsai was elected in 2016. Taiwan now has formal relations with only 15 countries, including Belize, Nauru and the Vatican, after Kiribati and the Solomon Islands broke off diplomatic ties with Taipei last year.Beijing insists that its diplomatic partners accept its claim on Taiwan, known as the "one China" policy, effectively forcing them to cut ties with the Republic of China.Reported by Chung Kuang-cheng for RFA's Cantonese Service. Translated and edited by Luisetta Mudie.

There's one-China country. China is one country and Taiwan is a different country. Like it or not.