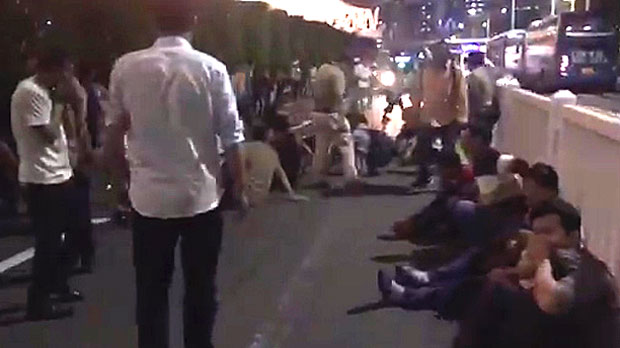 Former blast-workers protesting for health compensation huddle after being attacked by police in Shenzhen, Nov. 7, 2018.
Screen grab from video

Riot police in the southern Chinese province of Guangdong have used pepper spray on a small group of former blast-workers seeking compensation for lung disease, RFA has learned.

Police used the crowd-control measures to target a group of several hundred former blasters who staged a protest outside government social welfare offices in Guangdong's Shenzhen city on Wednesday.

Video obtained by RFA showed dozens of people at the scene staggering or crawling on the ground racked with coughing, while others yelled defiance at police.

Many were migrant workers from the central province of Hunan recruited to work as drillers and blasters, detonating explosives and using drills to cut shafts and passageways in rock, from the 1990s.

"We began coming out to Shenzhen ... to work in the drilling and blasting industry 30 years ago, but the construction companies did not provide us with effective protective measures," the protesters wrote in an open letter to the city government last May.

"The government did not fulfill its responsibility to effectively regulate the construction companies’ work safety conditions."

The protesters say they weren't informed of the severe occupational hazards that went with the job until they began getting sick and dying from silicosis years later.

"I am in so much pain right now, I feel like I'm going to die," silicosis sufferer and protester Yixiang told RFA on Thursday. "The police beat us up with metal batons."

"They also sprayed pepper spray on a lot of us, which left us in considerable pain," she said.

A former miner with similar health problems said the authorities had kept promising to address the protesters' demands, but then failed to act.

"I can't even walk upstairs now," the protester said. "We are only here having this demonstration because they've done nothing to sort this issue out."

"I can't say much more, though, because they are monitoring all of our phones," he said.

The group organized in 2009 to demand redress from the Shenzhen authorities, calling for compensation and an apology from the companies concerned and local officials.

It said the city government's disease control and prevention agency (CDC) had failed to adequately inform and test some workers, although others had been diagnosed with silicosis and awarded compensation.

"Dozens of us have died of silicosis," the letter said. "Of those who were diagnosed in 2009, more than 70 have died, and those of us who are still alive are getting sicker and sicker."

It said more than 200 workers were diagnosed with silicosis or discovered their illness had increased in severity after a fresh round of testing by health authorities in Hunan late last year.

The protesters called on the government to provide workers, or the families of deceased workers, with compensation and to adequately regulate the industry in future.

According to the Hong Kong-based China Labour Bulletin (CLB), the leader of the 2009 silicosis protests, Xu Zhihui, died in June 2015 at the age of 55.

Xu was one of around 180 construction workers from Leiyang in Hunan who made national headlines in the summer of 2009 when they traveled back to Shenzhen to demand compensation for the pneumoconiosis they had contracted while working as drillers and blasters on the city’s construction sites in the 1990s, CLB reported.

While the majority of workers were awarded various levels of compensation, ranging from 70,000 yuan to 130,000 yuan depending on the severity of their illness, the compensation received was too little and too late for many, it said.

"During the times when Xu Zhihui was in reasonable health, he continued to work on behalf of his colleagues, meeting with the media, volunteers, and student activists in a bid to ensure that the Leiyang workers were not forgotten," the group said in a report on its website.

The police abused harmless citizens who caused no harm, but instead witness against the harm done to themselves by a system that does not care about them. The police themselves are threatened if they do not do the abuse they will be next. Criminal communists caught again abusing the people and the police.