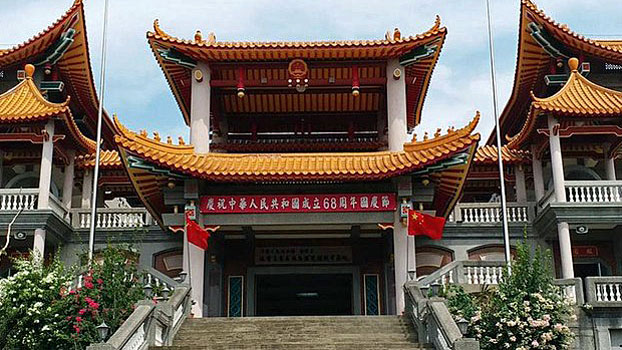 A view of the entrance to the Biyun Temple in Taiwan's Changhua county in an undated photo.
Photo courtesy of Wei Ming-jen/Facebook

A Chinese Communist Party supporter on the democratic island of Taiwan is in a dispute with local authorities after taking over a 100-year-old Buddhist temple to make a shrine to the ruling ideology of the People's Republic of China, just across the Taiwan Strait.

In a highly controversial development that many on Taiwan regard as an attempt at subversion and infiltration, the Biyun Temple in Taiwan's Changhua county has been reinvented as a "a base for the patriotic education and socialist identity of Taiwan," according to recent media reports.

Portraits of late supreme Chinese leader Mao Zedong and Premier Zhou Enlai have replaced Buddhist art on the walls, which now resonate to the sound of the communist national anthem, instead of Buddhist chanting for world salvation.

The communist "temple" plays the national anthem of the People's Republic of China and raises its five-starred flag in a daily ceremony, according to its founder, architect Wei Ming-jen.

According to a recent report in The New York Times, Wei is determined to speed up the "reunification" of Taiwan with the People's Republic of China, which has never ruled the island.

In response to local complaints about noise levels, and public concerns that Wei may be an agent of the Chinese state, officials from the county government, which is controlled by the ruling Democratic Progressive Party (DPP), cut off the water and electricity supply to the communist temple, saying it is an "illegal structure."

Wei was briefly detained after scuffles with officials, and a court case relating to the allegations of illegal development is under way.

He denies, however, that the project has Beijing's official backing, claiming that it was his own idea, and privately funded.

But former monks and nuns at the temple have accused him of evicting them after he was hired to oversee its expansion 10 years ago.

"He basically took over Biyun Temple," a monk, who gave only his religious name Bi-Tse, told RFA. "We are living next door to the temple at the moment, and they are doing all kinds of strange stuff in the new building, like raising the national flag of mainland China, and singing their national anthem."

"This isn't good for Taiwan, so the county government is planning to demolish the whole thing," he said.

A nun who asked to remain anonymous made a similar allegation.

"We are Biyun Temple," she said. "We are the real owners of the temple, and he took over our buildings."

‘Tantamount to an invasion’

Wang Yi-kai, a businessman who heads the Taiwan United Nations Alliance (TAIUNA), hit out at the administration of President Tsai Ing-wen for not doing enough to prevent Wei's project.

"[The Chinese Communist Party] are invading and engulfing our country, and there are people here who are doing their propaganda work for them," Wang told RFA in a recent interview. "It is tantamount to an invasion."

"This sort of invasion isn't just about free speech, because the Chinese Communist Party's United Front Work Department likely has some part in it," he said. "The government must take steps to deal with this, or else people will think that they are leaving us open to such invasions."

"We respect people's ideological freedom, but we must not have any illegal or chaotic situations occurring," Chiu told RFA. "We are a country with freedom, democracy and the rule of law, and everything is handled according to law."

"The judicial authorities should investigate whether or not he had the help of the Chinese Communist Party," he said.

Former Changhua county official Chen Wen-pin told RFA that Biyun Temple's expansion, where the communist shrine is located, was an illegal development at a statutory monument.

"At Biyun Temple we have a Taiwan citizen who is using the ideology of the Communist Party of China to do illegal things in Taiwan," Chen said.

And Changhua county councilor Hsu Shu-wei said Beijing has more than 800 missiles currently targeting Taiwan, meaning that it is a hostile foreign power.

"Even if it is his personal property, it should not be tolerated as a base from which to subvert Taiwan," Hsu said. "I think this is a matter of national security, and ... must be handled according to national security law."

Wei declined to respond to requests for an interview, and one of his representatives declined to comment, saying that a court case related to the allegations of illegal construction was still in progress.

China's People's Liberation Army (PLA) is gradually preparing for a possible invasion of Taiwan, according to a military analysis published by the Pentagon in Washington earlier this year.

Taiwan was ruled as a Japanese colony in the 50 years prior to the end of World War II, but was handed back to the Republic of China under the nationalist Kuomintang government as part of Tokyo's post-war reparation deal.

When the regime fled to Taiwan in 1947 after losing a civil war to Mao Zedong's communist troops, the Republic of China government ceased to control most of China, though it continues to be the official name of the Taiwan government.

Taiwan began a transition to democracy following the death of Chiang's son, President Chiang Ching-kuo, in January 1988, starting with direct elections to the legislature in the early 1990s and culminating in the first direct election of a president, Lee Teng-hui, in 1996.

Reported by Hsia Hsiao-hwa for RFA's Mandarin Service and by Pan Jiaqing for the Cantonese Service. Translated and edited by Luisetta Mudie.

Like their friend across the river from this town, China is an oppressive dictatorship. If they try to invade Taiwan, it will give the people under their control an opportunity to rise up and win their freedom. Tibet, East Turkestan, South Mongolia, maybe Hong Kong too await this opportunity.

The communist plan for this building will backfire - very disrespectful of culture.