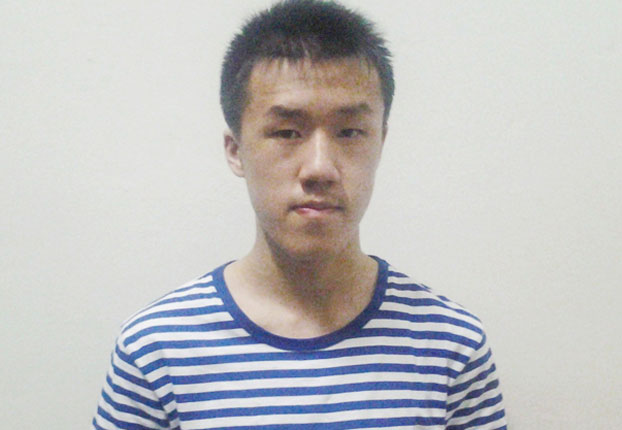 A Chinese college student and political asylum-seeker detained in Thailand for having an expired passport is incommunicado after going back to China voluntarily, fellow activists said.

Xu Zhenxin, 19, was detained last month after Thai police asked for his identification en route to the northern city of Chiang Rai, where he had hoped to find work.

Xu arrived back in China at Guangzhou's international airport on Aug. 24, after which he was briefly contacted by a fellow refugee.

"He got out of the airport after getting off the plane at Guangzhou airport, and I was talking to him by phone at that time," the refugee, who asked to remain anonymous, said.

"But we only spoke a few words, then he hung up."

The Thailand-based Chinese asylum-seeker said Xu said he was acting of his own free will, but that friends who met with him thought was "wasn't himself."

"He said he was determined to go home, and that he'd already bought the plane ticket," the refugee said. "But we haven't heard anything from him since, and we don't know if he's been detained or not."

Thailand-based political activist Li Xiaolong said Xu had seemed miserable when he visited him last month at the immigration detention center where he was being held.

Xu arrived in Thailand last November after taking a cross-border bus to Vietnam and a flight to Bangkok.

He had already received approval for resettlement as a political asylum-seeker, and held a UNHCR letter of protection.

A former freshman student at the Nanjing Post and Telecommunications University, Xu described himself as a political activist who frequently handed out leaflets calling for democratic reform on the streets of the city.

He had been interrogated several times by the city's state security police, who had beaten him at least twice, fellow refugees told RFA.

He also spent a week in a "black jail," an unofficial detention center, they said.

Xu's detention comes amid a growing climate of fear for Chinese dissidents who have sought political refuge in Thailand.

Claims of his voluntary return are also reminiscent of statements made by Chinese police that five Hong Kong booksellers detained last year for selling "banned books" to customers in China had willingly cooperated with police investigations.

Veteran refugee Li Yuzhou had also asked to go back to China after getting into an altercation last month with guards at the Bangkok Immigration Detention Center, Li said.

"The guards at the immigration detention center told my wife that he was sent back to China on Aug. 29," he said.

"[They said] that Li Yuzhou wanted to leave Thailand, because he would have been effectively locked up here indefinitely," Li said.

Thailand-based refugee Lin Dajun said Li Yuzhou had been talking of going back to China for the past couple of years, but his friends had tried to stop him.

"He had been talking about going back for the past couple of years, but a  lot of people told him to wait and see whether the United Nations would help him or not," Lin said.

"The U.N. handled his case very badly, so this isn't a recent thing," he said. "We all told him that if he went home, he'd never get the chance to leave again."

Li Yuzhou fled China in 2002 after Beijing state security police put pressure on him to spy on fellow political activists in the Youth Study Group.

Li Yuzhou wrote about their demands and posted the information online. He then joined the Thailand branch of the banned opposition China Democracy Party (CDP) soon after arriving in the country.

He was detained in an immigration detention center in Sept. 9, 2009 after being accused of planting fake explosive devices, and had twice resisted attempts by the Chinese government to extradite him.

Li Xiaolong's wife Gu Qiao is currently facing deportation for illegal immigration after the family were rescued from the wreck of a sailing yacht off the coast of southern Thailand.

Gu, who holds no passport, is being held in an immigration detention center, and recently pleaded guilty to immigration offenses, paving the way for her repatriation.

Li was released on bail with the children, while another refugee who sailed with them, Zhao Wei, was released because he holds a valid Thai visa, as were two other members of the yacht's crew.

Gu was later transferred to the Bangkok Immigration Detention Center from a similar facility in Chumphon, where the rescue operation took place.

Li, a founding member of the banned opposition China Democracy Party (CDP) from the southwestern province of Guangxi, escaped China with his family in 2014, before being classified a genuine refugee by UNHCR.

He had set up a local chapter of the party while in Thailand, and was also vocal in the campaign to prevent the repatriation of Chongqing-based activists Dong Guangping and Jiang Yefei.

Jiang and Dong, who had fled persecution in their home country, were handed back to Chinese authorities last November in a move that drew strong criticism from the U.N. They are now in criminal detention in Chongqing, where they face subversion charges.

Jiang's wife Chu Ling and Dong's wife Gu Shuhua and daughter Dong Xuerui flew to Canada from Bangkok for resettlement as political refugees just days after the two men were repatriated. They now fear Jiang and Dong are  at risk of torture and other violations of their rights.

Reported by Hai Nan for RFA's Cantonese Service. Translated and written in English by Luisetta Mudie.

So where is my old friend Li Yuzhou? His Facebook has been inactive since departing Thailand. This is a good man that has more than paid his penance with 7 years of incarceration in Thailand as a persona non grata. I think many people can attest to his strength of character and good will as the ambassador of IDC, Bangkok. I truly hope that his days of strife are over. Bless you Mr. Li......and good luck always.

CCP security police tentacles have spread far into such neighboring countries as Thailand and Cambodia, spreading lawlessness and arbitrary detentions across the PRC's borders.