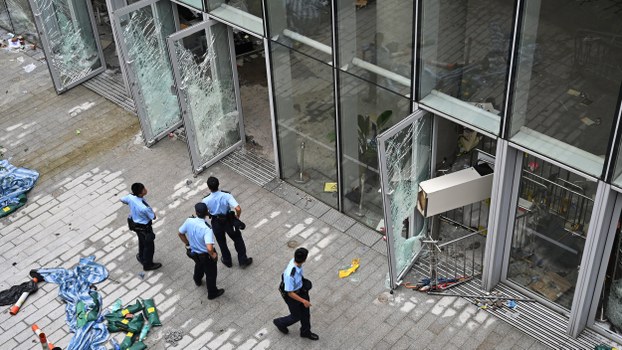 Police stand outside the Legislative Council building in Hong Kong inspecting damage after protesters broke into the building, July 2, 2019.

China on Tuesday called the occupation of Hong Kong's legislature by anti-extradition protesters "serious illegal acts that trample on the rule of law and endanger social order," while Britain called on China to respect its promises to preserve the city's freedoms for 50 years.

Hong Kong marked the 22nd anniversary of its handover to Chinese rule on Monday with a huge outpouring of public anger over plans to allow extradition to China and renewed calls for democracy, culminating in the storming of the Legislative Council (LegCo) by protesters who spray-painted anti-extradition slogans throughout the building.

U.K. foreign secretary Jeremy Hunt said Britain condemns "violence on all sides," in an apparent reference to police violence used to clear protesters as well as the storming of LegCo.

But he called on Lam's administration to realize that the protests stemmed from "a deep-seated concern by people in Hong Kong that their basic freedoms are under attack."

Beijing officials have previously said that the 1984 Sino-British Joint Declaration governing the handover of Hong Kong is nothing more than a historical document, and rejected any attempts from London to intervene in its implementation.

But Hunt said Beijing agreed to be bound by the treaty for 50 years after the handover.

Foreign ministry spokesman Geng Shuang also hit out at comments from foreign governments on recent mass protests against plans to allow the rendition of alleged criminal suspects to mainland China from Hong Kong.

Geng referred to protesters as "violent criminals," after a relatively small number targeted the Legislative Council (LegCo) with window-smashing, the destruction of security shutters and anti-extradition and anti-China graffiti, amid questions over why a detachment of riot police stationed inside the building did nothing to stop them over the course of several hours.

Monday's storming of LegCo came after an estimated 500,000 people marched peacefully against planned amendments to the Fugitive Offenders Ordinance, and amid renewed calls for fully democratic elections in the city.

Meanwhile, the state news agency Xinhua "strongly condemned" the actions of the protesters, saying that the occupation of LegCo was an "undisguised challenge" to Chinese rule and a "serious violation" of Hong Kong law.

Government headquarters and LegCo remained closed following the protests, which saw computers smashed and walls and doors spray-painted with slogans saying "Hong Kong is not China," "Withdraw!" and insults targeting the police and government.

Chief executive Carrie Lam's cabinet will now meet elsewhere, while LegCo will remain closed for two weeks while the damage is repaired, according to its president Andrew Leung.

Kurt Tong, the U.S. consul in Hong Kong, said the intentions of those seeking to bring change were good and Hong Kong has "the right ideas and the right values."

But he said the U.S. was disappointed to see the "violence" at the LegCo building.

Taiwan president Tsai Ing-wen said that protesters had expressed their desire for freedom and democracy.

"We hope that the Hong Kong government will deal with these demands from its citizens in good faith," Tsai said in a statement on her Facebook page. "If they [do], this will resolve the conflicts in Hong Kong society. If not, they will only get worse."

"The people of Taiwan have also fought for freedom and democracy ... during the last century, and therefore we feel keenly the plight of the people of Hong Kong ... We hope young people there will take care and stay safe," Tsai said.

Lam on Tuesday repeated her assurances that the extradition plans would be shelved and expire at the end of the current LegCo term, but stopped short of withdrawing them entirely, prompting fears that Beijing is insisting on their revival at some point in behind-the-scenes meetings.

"By suspending the bill at this point in time with no timetable and no plan to resume the debate of the bill in the Legislative Council, the bill will expire, or the bill will die, in July 2020 when the current LegCo term expires," Lam told reporters.

She struck a conciliatory note by noting that the the majority march was peaceful and generally orderly, before "seriously condemning" the storming of LegCo.

"This is something that we should seriously condemn because nothing is more important than the rule of law in Hong Kong," she said, rejecting protesters' calls for the dropping of all charges against those already arrested.

Police commissioner Stephen Lo said riot police had retreated out of safety concerns in the face of "violent tactics," tampering with the electricity supply and the discovery of a canister of P-phenylenediamine, which can cause itchy eyes, skin redness and swelling, and shortness of breath, earlier in the afternoon.

"I [was] afraid that, given that the lights had gone off, that there would be a trampling incident, and that bad things could happen if my colleagues became mixed up with protesters storming the building," Lo said.

Democracy campaigner Joseph Cheng, a former politics professor at Hong Kong's City University, said the international support for the Hong Kong protesters could have a backlash in Beijing.

"China very clearly sees international concern and media reporting of events in Hong Kong as interference in its internal affairs," Cheng said. "That won't necessarily lead to Hong Kong being let off the hook; in fact it will lead to a marked hardening in its attitude that Hong Kong needs to be even more tightly controlled."

Colonial-era second-in-command Anson Chan said the violence on Monday night could also prompt a public backlash against the protesters, but she said Lam should try to see things from the point of view of the very young protesters who occupied LegCo.

"One of the most important reasons [behind the violence] was that, after two million people took to the streets in protest two weeks ago, the chief executive didn't show her face, neither did she respond to any of their demands," Chan said.

"The [Hong Kong] government needs to think about and learn from this: we definitely don't want a situation where young people lose any faith in them at all," she said.

But an online poll by the Economic Times newspaper on Tuesday that garnered 225,087 replies showed that 81 percent of respondents agreed with the storming of LegCo as "a valid method of expressing demands."

Protesters also removed the flag of the People's Republic of China on Monday from a ceremonial flagpole outside the city's exhibition center, replacing it with a blackened flag of Hong Kong flown at half-mast, on a day deliberately chosen to coincide with the anniversary of the ruling Chinese Communist Party's founding in 1921.

Police had also been filmed beating some protesters with batons as they pushed towards the Convention and Exhibition Center, with social media posts showing photos of protesters with bleeding from head wounds, and amid reports of multiple calls for ambulances.

The protest was the latest in a string of mass actions in recent weeks, amid growing anger over the extradition amendments, and the use of tear gas, rubber and textile bullets, pepper spray and batons by police on unarmed protesters on June 12.

The amendments are widely seen as a threat to Hong Kong's way of life, which was supposed to have been protected by the "one country, two systems" framework under which the former British colony was handed back to China in 1997.

If they become law, the city could lose its status as a separate legal jurisdiction and trading entity, while journalists, visitors, rights activists, dissidents, democratic politicians, and members of the business community could be targeted for words and actions deemed illegal by Chinese authorities, and extradited to face trial in Chinese courts.

Pro-democracy lawmakers say the only solution to recurring mass protests in Hong Kong is for the government to allow fully democratic elections, a demand that was rejected by Beijing in 2014, sparking the Occupy Central, or Umbrella Movement.

Hong Kong's lawyers have also come out in support of protesters, saying that the extradition bill should be withdrawn completely, as opposed to the postponement offered by Carrie Lam last month.

Reported by Wen Yuqing for RFA's Cantonese Service, and by Qiao Long for the Mandarin Service. Translated and edited by Luisetta Mudie.

The success of protest against extradition treaty to China, have emboldened the Hongkongers. They are not contend with initial success, they are asking for more, for the resignation of lady Lamrin, and just showing sheer frustration and anger at Bejinng. It will be hard for Hongkong authorities to concede any thing more.
The sheer number of protesters, and the spotlight of the international media put the authorities in a difficult position for fear of backlash against any stringent measure. The British authorities support for Hongkong people are inspirational. They have shown some spin by calling out China to be accountable and keep their words in promises China made to it takes over the territory. The revolutionary protest in Hongkong is reverberating the Tienanmen protest for democracy in 1989. The western world's like US should speak out more forcefully to defend Hongkong people rights.