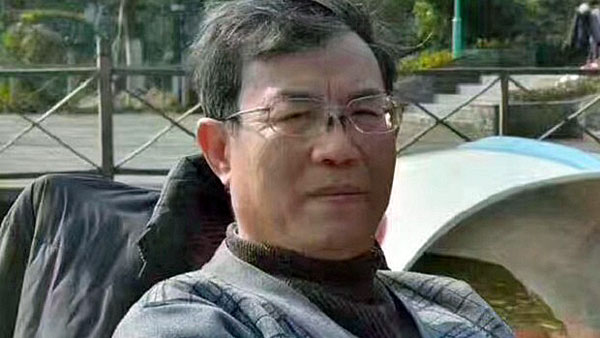 Authorities in the southwestern province of Sichuan are moving ahead with the subversion trial of a former professor at a ruling Chinese Communist Party school, although a date has yet to be set for the trial, RFA has learned.

Zi Su was taken away from his home in Sichuan's provincial capital Chengdu on Apr. 28, 2017, after he posted an open letter online calling on Chinese President Xi Jinping to step down as head of the party in favor of Hu Deping, son of late ousted Premier Hu Yaobang, whose death in 1989 sparked the student-led Tiananmen Square protests.

He was initially held on suspicion of "incitement to subvert state power," but the charge was changed to the more serious "subversion of state power."

The defense is calling for an open trial, but the authorities have yet to make a decision on this or on the trial date.

Zi plans to plead "not guilty" to the charges. However, defendants in China's judicial system who refuse to make "confessions" that are often broadcast by state-run media typically receive much harsher sentences.

"He was there, too; he seemed in good spirits and his health seems pretty good," he said. "He is a veteran party member and government official with a huge amount of experience behind him."

"There is no doubt that he is innocent," Ran said. "He only behaved as a citizen and party member, and only acted in accordance with the law and the constitution, as well as the party's constitution."

"The law states that trials that don't contain any state secrets should be held openly," he said. "The prosecutor and the judge both accept this. But they haven't made a decision yet."

A friend of Zi's who gave only his surname Luo said Zi is honest and patriotic.

"He is clearly innocent, judging by his thinking and everything he has said," Luo said. "He did nothing wrong whatsoever ... He supports democratic principles. I think he is a person worth learning from, and I have huge admiration for him."

Sichuan-based constitutional scholar Li Shuangde said Zi's open letter calling on Xi to step down is likely behind the case against him.

"Zi Su is now being charged with subversion of state power, not incitement to subvert state power as was previously the case," Li told RFA. "He will certainly be found guilty, because he posted that open letter online, and this is the second time he has been detained."

"His lawyers and family are applying for bail for him, but the authorities haven't granted it," he said.

In one of Zi's letters, he hits out at a "personality cult" around President Xi, likening the president's leadership to that of late supreme leader Mao Zedong.

The approval in March by China's rubber-stamp parliament, the National People's Congress (NPC) of a second and unlimited term in office for Xi appears to have borne out these fears.

Zi also wrote that Xi had launched an "unbridled attack" on rights lawyers and democracy activists, as well as on online freedom of expression.

He said the president's much-vaunted anti-corruption campaign had been selective, and "waged under a one-party dictatorship."

Most of all, Zi hit out at the "seven taboos," a list of things never to be discussed in public life, which were the subject of party Document No. 9, which veteran political journalist Gao Yu was jailed for "leaking overseas."

They are: universal values of human rights and democratic, constitutional government, press freedom, civil society, citizens' rights, the historical mistakes of the Chinese Communist Party, the financial and political elite, and judicial independence.

Zi said the "taboos" had comprehensively restored the ideology of late supreme leader Mao Zedong. He was taken away by police within hours of posting the letter.

"Subversion of state power" carries a minimum jail term of 10 years in cases where the person is judged to have played a leading role.

Reported by Lau Siu-fung for RFA's Cantonese Service, and by Yang Fan for the Mandarin Service. Translated and edited by Luisetta Mudie.

I believe the English phrase "subversion of state power" is a mistaken translation from the Chinese 颠覆国家政权. It is mistaken because any political power can only be "won, fought for, seized, or transferred". Therefore the correct translation of 颠覆国家政权 should be "to win or to fight for state power".

If a defendant understands 颠覆国家政权 as such, he/she may use the Article 79 of the Chinese constitution to defeat the 颠覆国家政权 charge, because Article 79 provides the right to people to win state power by means of elections.

Resign you man named Xi. You cannot take that ? Too Bad, mon.