Chinese authorities detain an activist for posting a photo of the 1989 pro-democracy protests.
2010-11-29
Tweet 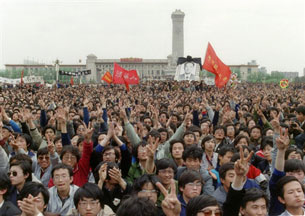 Authorities in Beijing have formally detained a veteran human rights activist after he posted a photo of the 1989 student demonstrations in the capital on a popular Internet chat service.

Bai Dongping, a former worker activist and now a prominent legal advocate for petitioners, was detained by police on Saturday on suspicion of "incitement to subvert state power," his wife said.

"Six people, including officers from the national security police from the Xicheng district branch and the local police station, came around at 1:00 a.m. on Saturday and took Bai Dongping away," said Bai's wife Yang Dan. "They also took away his cell phone and his computer."

She said Bai was released several hours later, but warned that he shouldn't try to leave Beijing.

"But at 1:40 p.m. in the afternoon, they called up again and said they wanted to talk to him again," Yang said. "After he went over there, he didn't come back."

"I went over there ... the next day ... and the duty officer in charge said he had been transferred to the Xicheng police station under criminal detention."

The charges revolved around Bai's posting of a single photograph on the popular online chat service QQ a few days earlier, which depicted students demonstrating.

Yang said the police had later informed her that Bai was being detained on suspicion of "incitement to subvert state power."

"When I saw him during the period they let him go again, he told me that it was because of [the photo]."

"They said 'he'd crossed a red line.' I don't know what that means, but that's what he said," Yang said.

She said she planned to hire a lawyer to defend Bai as soon as she received official confirmation of his detention.

Bai, 47, played a prominent role as a worker activist in the 1989 student-led pro-democracy movement in Beijing.

A committed Christian, Bai is also a member of the Petitioners and Rights Defenders' Group of lawyers.

Tang Jitian, a fellow member of the group, said Bai was an active member of China's civil rights community.

"He has really done a lot of work to promote democracy and to improve human rights," Tang said, adding that the charges against Bai seemed "serious."

"From one perspective, it seems serious, but ... perhaps they're just making them seem serious to frighten the family," he said.

Tang said that a second member of the same legal group, veteran activist Li Hai, hasn't been heard of since he was taken away by police from the Shenshan house church research office on Oct. 30.

Bai has also been known to attend Shenshan meetings.

"We haven't had any news from him," Tang said of Li. "He's probably either under house arrest, or has been forced to 'take a trip out of town.'"

"Basically, no one knows what's become of him," he said.

Li, 56, was another prominent 1989 activist, who took on the role of liaison officer for the autonomous students' association that directed the Tiananmen Square protests.

He was handed a six-year jail term for subversion in 1995.

Reported in Mandarin by Qiao Long. Translated and written in English by Luisetta Mudie.