In rural Shaanxi, tensions have been running high between farmers, officials and real estate developers.
2010-05-17
Tweet 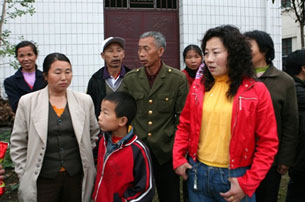 Family members gather outside a kindergarten where seven children and a teacher were hacked to death with a cleaver in Nanzheng, May 12, 2010.
AFP

HONG KONG—Residents of Nanzheng county in China's northern province of Shaanxi have painted a grim picture of simmering pressures among farming communities in the region, after last week's gruesome attack on a kindergarten in the area.

Villagers living in a different town in the same county where the killings occurred say they have been bombarded with government requisition notices for their farmland amid the global economic slowdown, sparking protests, beatings, and detentions for anyone who tries to protest the loss of his or her land.

"The whole county is rife with land profiteering," said one resident of Dahekan township, Li Jinyi.

"Murky Nanzheng and corrupt Hanzhong have pushed local farmers to death's door... Things have been so hard for us these past few years."

Nine people, seven of them small children aged four and five, were confirmed dead at the Hanzhong Municipal 3201 Hospital after a local man went on a rampage with a kitchen cleaver before committing suicide in nearby Shengshui township last week.

"They are requisitioning land again," Li, 87, said. "They have publicized that they will build a 'Times Square.'"

"The announcement is telling local farmers to stop tilling the fields, and that the land will be fenced off. In reality, it will be given to property developers. When they have taken all our land, there'll be nothing left for us to live on," he said.

Last month, Dahekan villagers said they were beaten by a gang of men allegedly hired by a local property development company after they protested plans to use 170 mu (11.3 hectares) of their farmland for the construction of an "International Health Spa."

In total, residents of Sanhuashi, Yuying, and Dianzijie villages in the Dahekan area said a total of 4,000 mu of farmland had been taken over by local governments in the area since 2007, with more than 300 families forcibly evicted from their homes.

Yuying villager Tuo Ruilian said the land grabs were made under the auspices of a highway project.

"They have taken more than 4,000 mu of land from these four villages, and the government and developer have got together to beat up the local people," Tuo said, adding that repeated complaints and attempts at lawsuits had been ignored by the authorities.

"We are law-abiding citizens, yet they have demolished our homes. And to this day, the entire family, young and old, is homeless. We are living in a shack made of asbestos tiles on the site of an abandoned factory by the river, where the weeds grow," Tuo said.

"Nobody cares about us. We have made complaint after complaint to higher levels of government, and I have been detained three times by the government," he said.

An employee who answered the phone at the Dahekan township government offices declined to answer questions about the villagers' allegations.

However, an employee who answered the phone at the Nanzheng county government planning and construction bureau confirmed that there are a number of intercity highway projects affecting villages in the area.

"They are basic infrastructure projects," the official said. "For example, urban highways and other projects for the public good."

An employee who answered the phone at the Nanzheng county Land and Resources Reserve and Exchange Center confirmed that the local authorities had recently sold at auction a plot of more than 100 mu of farmland in Dianzijie village.

"It was zoned for residential development," he said.

"It was just sold recently. A plot of land just to the south of the Nanzheng highway in Dianzijie."

Officials in Dahekan have been compensating villagers at a rate of 73,000 yuan per mu since 2008, although in Dianzijie, villagers said they only received about half of the money earmarked in the budget for compensation, with the rest siphoned off to the developer, villagers said.

Dianzijie villager Zhang Jinhe said he has been campaigning for fairer compensation, but with little success.

"The county government gave us 75,000 yuan per mu, which was divided between the township and village governments to be given out. But at the very least there was 2,000 yuan per mu missing by the time local people got their money. They sold it [the land] to the developer for 580,000 yuan," Zhang said.

Zhang, who is the main representative of local people over the compensation issue, said he has been detained repeatedly by the authorities since he started trying to protest at the low compensation.

"In 2008 they locked me up for a few days after the demolitions," he said.

"In 2009, they dragged me back from Beijing and charged me with contempt of an official ruling. They said I hadn't demolished my own house, and I was locked up for nine months."

But local resident Li Jinyi said the villagers are still planning to take their complaint to Beijing, both about compensation and about repeated detentions of villagers under the pretext of "political study classes."

"They have been detaining us in this place illegally and saying we are there to study the law," Li said.

"Once you go in there, you don't get out for a month and a half."

"They're the ones who don't understand the law, and they are asking us to study the law. Petitioning isn't against the law, so on what basis are they detaining us?"

Chinese social scientists have linked the recent spate of kindergarten massacres to deep-running problems in Chinese society, with social conflicts like those in Nanzheng growing in intensity.

They have also blamed decades of political violence and a lack of well-established mental health services for the spate of violence against children.