Employees and management face off at a Coca-Cola joint-venture bottling plant in southern China, as the country's official trade union begins to flex its muscles for the first time in decades.
2008-09-12
Tweet 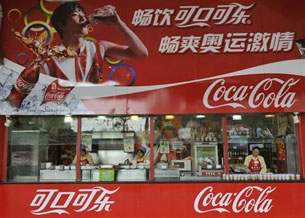 HONG KONG—A dispute over collective labor contracts at a Coca-Cola bottling plant in the southern province of Guizhou has underlined fears that new legislation won't help Chinese workers unless the country's official union makes sure it has teeth.

The row at the factory belonging to the joint-venture Hunan-based COFCO Coca-Cola Beverages Co. blew up in April, according to Wu Likang, a distribution department employee at the Guizhou plant.

"The new Labor Contract Law took effect on January 1, 2008," she said. "Our contracts expired on April 30. On April 3 at 6 p.m. they called us into a meeting all of a sudden with no notice, and told us that they were outsourcing our jobs and turning us over to a third party."

"We would no longer be Coca-Cola employees," she said.

Wu said about 10 people were notified directly that their contracts were being terminated, while others left of their own accord. More than 20 distribution and warehousing employees had left the company.

"Now there are only four or five people still working in the distribution department. Everyone else has left," she added.

They called us into a meeting all of a sudden with no notice, and told us that they were outsourcing our jobs and turning us over to a third party."

Pay cut in half

She said the workers had once received a basic salary of 2,500 yuan (U.S. $365) a month, but that their incomes had been cut in half after the transfer to the labor contractors Rongcheng. The workers had complained several times to Rongcheng.

Eventually, on July 16, the company issued an announcement titled "Regarding the decision to terminate labor contracts." The workforce had been unemployed since then, Wu said.

An employee who answered the telephone at the Hunan Zhongliang Coca Cola Soft Drinks Co. said they didn't know about the dispute.

Asked if they could transfer the call to someone responsible, they said: "Nobody is in the office right now. They are all very busy because it's the National Day holiday soon."

But a human resources manager at Rongcheng confirmed there had been a labor dispute at the company. "I don't deny it," she said. "There was a dispute between workers and management because of cuts to their salary."

COFCO Coca-Cola Beverages Co. is a joint venture company established between COFCO and the Coca-Cola Co., and is the only Coca-Cola bottling group controlled by Chinese-funded enterprises.

The workers have petitioned local authorities in the Guiyang municipal government several times, Wu said. The case is currently awaiting arbitration from the labor department. Wu thinks it unlikely to come out in favor of the workers, because of statements already made by local officials.

Activists have taken angry aim at the apparent unwillingness of local state-run union and labor department officials to play a crucial role in giving the new legislation teeth.

But a recent, high-level campaign by the All-China Federation of Trade Unions (ACFTU) to sign collective labor contracts with global retail giant Wal-Mart by the end of this month, and steps taken by union officials in the southern city of Shenzhen, show that things may be changing.

The collective labor contracts cover remuneration, working hours, paid vacations, labor insurance, and welfare benefits, and stipulate that workers should be paid more than the local minimum wage, according to a July 31 report in the official Workers' Daily newspaper.

According to the Hong Kong-based China Labour Bulletin, which has long slammed the ACFTU for its failure to enter into collective bargaining with employers, are the changes in Shenzhen a "crucial turning point" in the history of China’s trade union movement.

It quoted Guangzhou FTU chairman Chen Weiguang as saying in July that the union was a matter "for the workers themselves."

And it pointed to breakthrough wording in recent labor guidelines issued by the union in Shenzhen, which call for a "responsible, empowered, and battle-ready union" that can protect workers’ rights, according to Zhang Youquan, head of the Shenzhen Federation’s legal department.

Zhang told a new conference to announce the new regulations that this was the first time the term “collective bargaining” (jiti tanpan), as opposed to the previously used but much weaker concept of “collective consultations” (jiti xieshang), had been applied in China’s local legislation.

China Labour Bulletin director Han Dongfang said China had long been at the point where something had to be done.

"Today in Shenzhen we can see the worst excesses of capitalism, but also the desire of the people for social justice and–with these new regulations–the willingness of the government to move towards capitalism with a human face," he said in a statement on the CLB Web site.

Also significant in the Shenzhen regulations was the omission of any reference to the union's role in facilitating a return to normal production in the event of a dispute, it said.

it is a good book about coke. call, what coca cola did to stop the union from coming in.